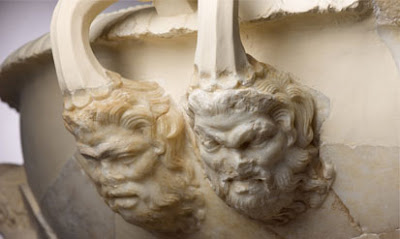 The Israel Museum is putting on a major exhibit about Herod the Great, who ruled in Jerusalem from 37 to 4 BC.  Herod was put into power by the Romans, who found the Jews baffling and were very happy to have a Jewish client king manage that fractious population for them. Herod did a good job, too, despite the evil reputation he left behind him; there were problems in Israel under his reign, but nothing compared to those that came after, when there was no figure of his stature to mediate between the Romans and the Jews. 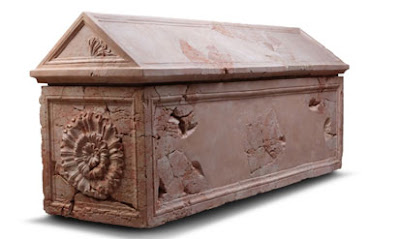 Israeli archaeologists have been exploring the site of the city he founded, Herodium, for decades, and their spectacular finds include his tomb and sarcophagus (above). The exhibit is dedicated to the memory of Ehud Netzer, the archaeologist who led the project for many years before he died in the midst of his own excavation, falling to his death when a safety railing he was leaning on gave way. Think about that the next time you are tempted to blow off safety precautions on your own site. 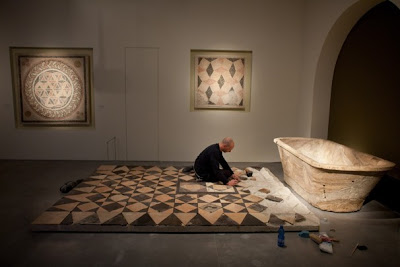 Since this is Israel, the exhibition is of course causing political controversy. Herodium is on land administered by Israel but claimed by the Palestinian Authority, and some Palestinians have protested Israel's possession of these artifacts. The Israel Museum says that the Oslo Accords have a provision for Israel to serve as custodian for Palestinian artifacts, and that they are not asserting ownership. As I usually do with Israeli/Palestinian problems, I will close my eyes and hope the conflict magically goes away. 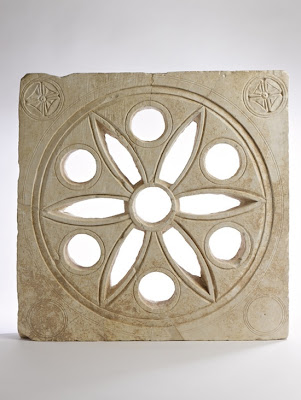 Meanwhile, the exhibit looks amazing, a reminder of a brief time when Israel and the wider world reached a political and cultural accommodation that bore amazing fruit.
Posted by John at 8:43 AM