The Mausoleum of Galla Placidia 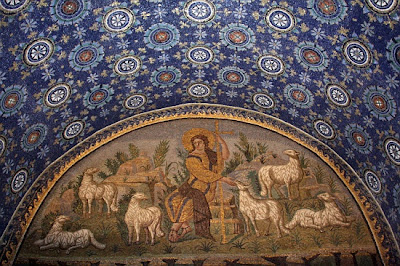 Galla Placidia was a Roman princess who married a barbarian king, a real-life romance novel plot that, alas, was probably much more politics than romance. Galla Placadia (392-450) had about the most impressive pedigree in history. She was the daughter of one Roman emperor (Theodosius I) and the granddaughter, through her mother, of another (Valentinian I). She was also the half sister of two other emperors, Arcadius and Honorius. What's more, she spent much of her youth in the household of the great general Stilicho, remembered by some as the "last of the true Romans." 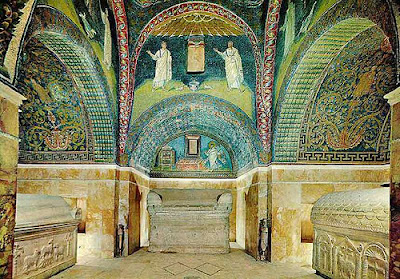 In 408, her worthless brother Honorius had Stilicho executed, and began rounding up and slaughtering the families of Stilicho's followers. Those followers had been defending Italy against the Visigothic King Alaric I. When their own emperor began trying to exterminate them, they promptly switched sided and joined Alaric. 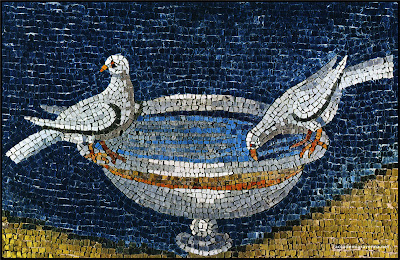 This left nobody to defend Italy, and Alaric promptly marched in and besieged Rome. After a year of back and forth negotiations, Alaric got tired of Honorius' diplomatic intrigues and ordered his men to storm the city. Rome, the city that bestrode the world, was sacked by the barbarian armies on August 24, 410. 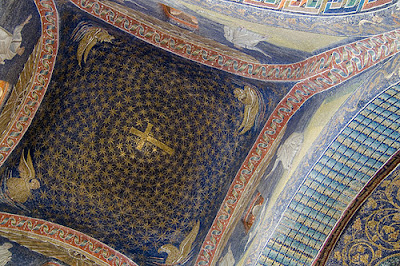 Along with a vast horde of other booty, the Visigoths seized Galla Placidia. As part of the attempts to make peace that followed the sack, she was married to Alaric's brother Ataulf, probably in early 414 at Narbonne in Gaul. Alaric died soon after, and Ataulf became king of the Visigoths. Ataulf and Galla Placidia had at least one son, Theodosius, but he died very young. 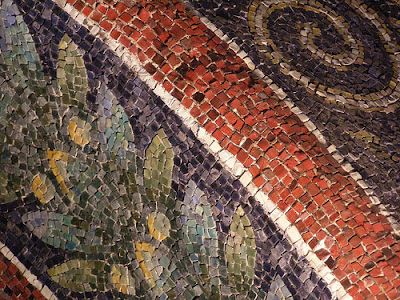 Ataulf  rather foolishly included a man among his bodyguard a man who was the sworn follower of a chieftain Ataulf had once murdered; various accounts name this man either "Dubius" or "Eberwolf." Dubius/Eberwolf assassinated Ataulf in 415. After a frightening interlude as an unprotected woman in the midst of a Visigothic civil war, Galla Placidia was traded to the Romans for a large shipment of food and made her way back to Italy. 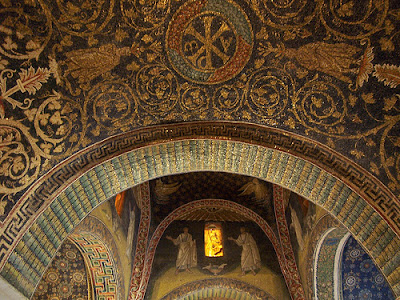 That meant returning to her awful brother Honorius. He promptly married her to the future Constantius III (so now she was married to an emperor) and they had several children, including the future emperor Valentinian III (so she was also the mother of an emperor). Valentinian became emperor as a child, and from 425 to 437 Galla Placidia was regent of the western empire. Not that there was much left of the western empire in 425, other than Italy and some islands, but still, regent of the Roman Empire is nothing to sneeze at. 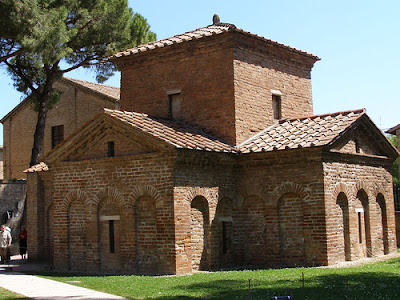 Given this family and career, you can imagine that when Galla Placidia died in 450 she received an extraordinary funeral. She was interred in this amazing little mausoleum at Ravenna with its extraordinary mosaics, one of the most beautiful survivals of the fifth century.
Posted by John at 1:41 PM