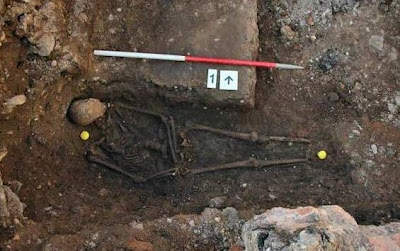 You all know me, when I hear some big, exciting claim from scientists or archaeologists I think, that will be interesting if it turns out to be true. So when archaeologists from the University of Leicester starting claiming, back in September, that they had found the bones of King Richard III, I thought, sure, maybe, whatever. 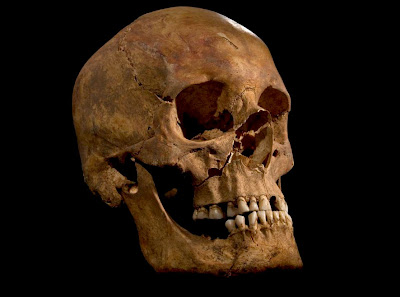 Now, though, the case is starting to get more convincing. There seems to be little doubt that the building they found under a parking lot is the Greyfriars Church where some contemporaries thought the king had been buried. The skull shows evidence of potentially fatal battle wounds, ten in all, including a sword slice at the base. The investigators note that sword cuts would not have hurt that king if his helmet had been on, and they speculate that he lost it. I wonder if he was mortally wounded in some soft tissue, and then as he lay on the ground somebody yanked the helmet off and went at him with a sword for good measure. 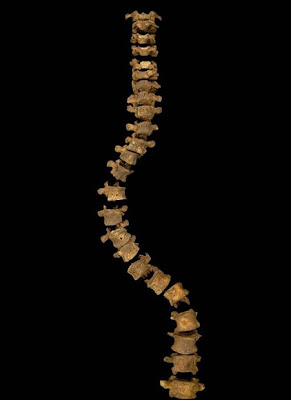 And here is the skeleton's spine, which reveals that the subject suffered from idiopathic adolescent-onset scoliosis. This is consistent with contemporary descriptions that Richard was "twisted in body."

DNA analysis of the skeleton has not gone as smoothly as the investigators would  like, but some DNA was extracted, and comparison of it with known Plantagenet descendants has certainly not ruled out identification with Richard.

So, I will grant provisional acceptance to these claims, and accept that this is probably Richard III. Cool. I wonder if the Crown will give him a royal burial somewhere nice -- York Minster, say? He was from the House of York -- or treat him like the criminal usurper the Tudors claimed him to be.
Posted by John at 11:03 AM