The Margaret Mead Controversy Rolls On 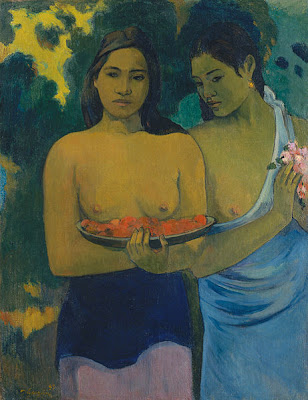 Once upon a time, a young American anthropologist named Margaret Mead went to Samoa, where she spent a lot of time interviewing women about their sex lives. Then she came home and wrote a book called Coming of Age in Samoa (1928), in which she argued 1) that Samoan teenagers had a lot of sex before marriage, and 2) that because of the lack of "repression" Samoans had much less troubled attitudes toward sex than westerners, and their transition to adulthood was much happier and smoother than the adolescent struggles experienced by western teenagers.

Mead has been controversial ever since. This is partly because of her personality and her political beliefs, and partly because some of her work was undoubtedly sloppy. She was a leftist first and an anthropologist second; for her, activism always came before scholarship. She was a leading light of a school of left-wing thought that we might call feminist sexual pacifism, viz., women must become equal partly so they can then restrain male aggression, and the first thing we need to do to remake society is end men's sexual control of women. Free love, not war.

The ongoing debate over Mead's work in Samoa was launched by Derek Freeman, who argued in a 1983 book that 1) Mead made a lot of stuff up, and 2) she was so gullible that she was taken in by teenage girls who were only telling jokes. Freeman's sources were from the families -- prominent Christian families, full of bishops and the like -- of some of Mead's subjects, and they told Freeman that they were shocked by the lies Mead had told about their grandmothers 50 years before. Freeman chose to believe these sources and therefore to accuse Mead of being gullible, which, well, you know.

After numerous books and articles and countless hours of arguments in the bars at anthropological conferences, the consensus seems to be that the factual part of Mead's Samoan work is pretty good. Premarital sex was common in early twentieth-century Samoa. As to whether Samoans were really happier than stuffy middle class Americans, well, that is a harder question, but she was certainly entitled to her opinion.

Some of Mead's later work has not stood up nearly so well. For example, Sex and Temperament in Three Primitive Societies compared three societies in New Guinea and found that the greater the power of women, the less violent the society. Since there are hundreds of distinct societies in New Guinea, no doubt it would be possible to find three of which this was true, but later work suggests that Mead did not even achieve this. In particular, the Arapesh, said by Mead to be pacifists, have been embroiled in wars ever since. Even Mead knew that they had recently been involved in a war, but they insisted that they only fought defensively, and Mead believed them. Other claims about sex roles in these societies have also been questioned by later anthropologists.

I find the intersection of politics and anthropology quite fascinating. It has certainly been with us for a very long time. After all, why are we curious about other cultures? One big reason is that they show us other ways of doing things, and just knowing that there are other ways of doing things can lead us to question our own cultural assumptions. As Mead's mentor Franz Boas wrote in his introduction to Coming of Age in Samoa,

Instructive how? Margaret Mead and her allies pursued anthropology as a critique of western society. They were convinced that we had gone badly astray -- and in an era of world war, totalitarianism, scientific genocide, and concrete box architecture, who could blame them? To the conservatives' claim that we had gone astray by too much questioning of our own traditions, Mead opposed the claim that, on the contrary, World War I was the perfect expression of the western tradition, and what was needed was a radical reconsideration of our society from top to bottom. The point of anthropology, to people like Mead, is to convince people that our way is not necessarily the best way. Anthropologists have therefore been strongly drawn to societies with weak notions of private property, strong public roles for women, and so on.

As a child of the post-sexual revolution world, I have never found Mead's claims about Samoan sexuality terribly interesting. We in America now have a sexual cultural at least as promiscuous as that of Polynesia, but we emphatically do not find that this makes it psychologically easier for anyone to navigate the transition from child to adult. I am therefore drawn to another part of Mead's picture of Samoa. A Samoan girl, she wrote, was presented with only a single set of values, and only one possible path to adulthood. But


... a[n American] girl's father may be a Presbyterian, an imperialist, a vegetarian, a teetotaller, with a strong literary preference for Edmund Burke, a believer in the open shop and a high tariff, who believes that women's place is in the home, that young girls should wear corsets, not roll their stockings, not smoke, nor go riding with young men in the evening. But her mother's father may be a Low Episcopalian, a believer in high living, a strong advocate of States' Rights and the Monroe Doctrine, who reads Rabelais, likes to go to musical shows and horse races. Her aunt is an agnostic, an ardent advocate of women's rights, an internationalist who rests all her hopes on Esperanto, is devoted to Bernard Shaw, and spends her spare time in campaigns of anti-vivisection. . . . And this may be within the girl's own household. Add to it the groups represented, defended, advocated by her friends, her teachers, and the books which she reads by accident, and the list of possible enthusiasms, of suggested allegiances, incompatible with one another, becomes appalling.

This, it seems to me, is the source of the troubles young westerners have with their identities. The less that is fixed for us by tradition, the more we have to find or invent for ourselves. But although I find this to be Mead's most important observation, neither she nor her critics devoted much attention to following it up. After all, if we believe that young westerners have troubles because they live in an enormous, rapidly changing, highly commercialized, highly diverse society, what then? Obviously we cannot somehow recreate a world in which we all pursue our father's careers, honor the king and worship in the only church our ancestors have ever known. So there is little fodder for left-right wrangling, nothing to get angry about, and therefore not much reason, it seems, for politicized anthropologists to care.
Posted by John at 2:10 PM