Oh great, you're thinking, what could possibly be less interesting than a 300-page book about military personnel policy? Yet I found The Generals fascinating. It shows American military history from World War II to the present in a new light, and it also confronts one of the most difficult and important questions of our bureaucratic age: how to arrange a huge organization so that it finds and promotes the people it needs to provide effective leadership. Since the organization in question is supposed to fight wars, further questions arise, such how to tell in peacetime which officers will lead well when the shooting breaks out, and how to make sure that the army is run for the benefit of the nation as a whole and not just for its own officers. 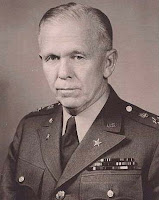 Ricks begins with a long section on George Marshall, who was the Army Chief of Staff during World War II. Marshall, Ricks argues, created the modern American army. Some of his policies are still in place, and others, Ricks thinks, should be brought back. When he was put in charge, in 1939, Marshall immediately began readying the army for war. With Roosevelt's backing he engaged in a major housecleaning of peacetime officers he thought were too old, cowardly, or weak to command in war. By December, 1941 he had sacked 600 officers, promoting younger, bolder men into their places. After the fighting started he and his chief subordinates continued to sack officers at a frightening pace, removing dozens of division and brigade commanders over the course of the war. As Ricks says, there is no way that such a policy can really be fair to the officers. No doubt Marshall sacked some capable officers before the war because they looked old and tired to him, and no doubt some of the men removed in combat had just been unlucky. But on the whole the policy of rapid relief made the army stronger. And that is the point. Armies do not exist to be fair, but to win wars; they should serve the national interest, not the interests of their officers.

Marshall also had a certain kind of man in mind to become a general in his army. He was suspicious of flamboyant martinets like Patton and MacArthur, and he sidelined them as much as possible. His ideal officer was a team player, able to get along with his staff, subordinates, superiors and allies. Marshall valued energy more than intellect, resolve more than subtlety. Not that he disliked smart men; he was himself brilliant, and for the top job in Europe he picked the extremely intelligent Eisenhower. But he wanted doers, not thinkers. Ricks speculates that while this policy worked well in World War II, it may be the root reason why the American army has often been lead by unimaginative bureaucrats, the sort of people who end up being eulogized as "great Americans" rather than brilliant leaders.

To me the most interesting part of the book was the section on Vietnam. What I have read about the war has mostly been written by outsiders who were hostile to the whole project, and who were not even trying to be fair to American commanders. So it was news to me how many American officers were every bit as critical of Westmoreland's war as any journalist. Rather than adapting the counter-insurgency tactics used successfully by the British in Malaya, and recommended by the US Marines in Vietnam, Westmoreland insisted on a "search and destroy" strategy. He sent US troops running around the highlands looking for Viet Cong units, using massive firepower in a mostly vain attempt to kill guerrillas faster than the communists could replace them. The measure of military success became the "body count," which was a terrible idea in the first place -- as many pointed out at the time, the North controlled how many men they sent into battle, so they could always arrange the war to keep their losses at level they could accept -- and also set the stage for the corruption and cynicism that erupted at My Lai.

In Ricks' telling, the army was ruined by the war. By 1970, junior officers were approaching open rebellion against their superiors, and the soldiers, of course, were rolling grenades at their officers. (There were more than 200 confirmed cases of "fragging" during the war, and who knows how many hundreds of unconfirmed attempts.) The massacre at My Lai was ordered by officers and covered up by their bosses, but then it was investigated and prosecuted by other officers who were horrified by what happened, and the tensions led to fistfights in officers' clubs. At the end of the war one senior general told the new Chief of Staff, "this army is on its ass." And part of the problem was personnel policy: the army decided that while soldiers and officers would both do 1-year rotations to Vietnam, the officers would spend half of their year in staff assignments and only 6 months commanding in the field. Only a few officers volunteered for a second tour, so from 1967 on US troops were led by Lieutenants and Captains with an average of 3 months combat experience. No wonder Viet Cong veterans were so scornful of American fighting ability. The future army leaders who came out of the war, like Colin Powell and Norman Schwartzkopf, emerged determined that nothing like Vietnam would ever again happen to their army.

The most talked about section of the book has been the last, on the wars in Iraq and Afghanistan. Ricks has been a vociferous critic of the US military's performance in those wars -- his book about Iraq is called Fiasco -- and he lays more on here. To Ricks one of the Army's worst flaws has been its refusal to relieve failing commanders. The last time an American brigade or division commander was relieved for cause was in Korea. Ricks singles out Tommy Franks and Ricardo Sanchez as two men who should have been relieved, but were instead allowed to finish their scheduled command rotations. It was Franks who bungled the Tora Bora operation in Afghanistan, allowing Osama bin Laden to escape to Pakistan, and yet he was left in place as head of Central Command to bungle the invasion of Iraq as well. And when a commander with a clue was found (Ricks is a fan of David Petraeus), he was rotated home after just one year. When the army brass was questioned about this policy, they said it was "fair" to officers to give several men a chance at the top field commands. That dreaded word "fairness," to Ricks, signals an army being run in the interests of the officers rather than the national interest. Ricks believes that more army officers, especially division commanders and their staffs, should have had to stay in theater for two, three, or even four years, rather than just one. Officers like to talk about sacrifice, he says, so maybe we should ask more of them.

If you have any interest in what the US Army actually does, and how officers think about it, read The Generals.
Posted by John at 2:41 PM