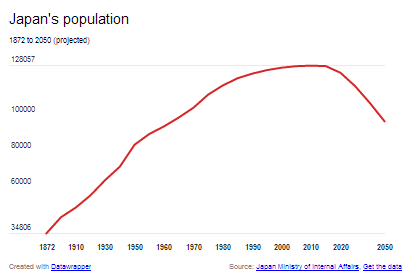 
Because Japanese people aren't having kids – which is both partially a product of, and perhaps driven by some of the same factors as, their relative disinterest in sex or sexual relationships – the population is shrinking. It's shrinking very, very fast. The Japanese population dropped by 212,000 people last year, the largest decrease on record. The birth rate is still falling, with only 1.03 million live births last year, a record low and dramatic decrease from 1.21 million the year before.

This is going to be interesting.
Posted by John at 9:05 AM

So a large aging population, a shrinking youth population to care for them, relative general economic stability threatened essentially only by a shrinking labor pool, and a quasi-xenophobic cultural view of non-natives.

Yeah, I'm gonna cut to the chase and spoil the ending - immigration is gonna happen no matter what, the older Japanese are gonna grumble about it, the Japanese youth are going to either embrace the change or not particularly care at all, and Japan will become a bit less insular and self absorbed.