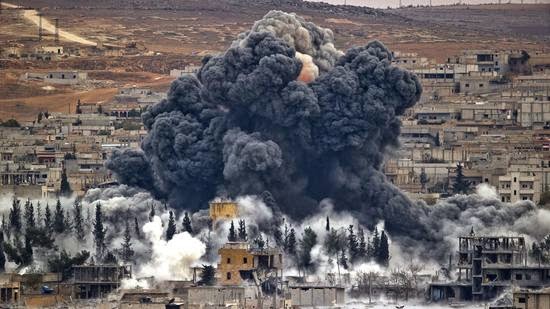 Statement from the US Central Command:

Anti-ISIL forces have fought aggressively with resilience and fortitude. While the fight against ISIL is far from over, ISIL's failure in Kobani has denied them one of their strategic objectives.


Retaking control of Kobani would be a significant victory both for Kurdish forces and the Obama administration, which has unleashed a torrent of air strikes targeting Islamic State in the Kobani area as part of its strategy to “degrade and ultimately destroy” the Al Qaeda breakaway faction.

Ultimately, Kobani’s significance is more symbolic than strategic.  . . . The military watched with surprise as Islamic State continued sending hundreds of fighters, vehicles and weapons to Kobani, which was of no critical strategic importance to the overall fight but had become something of a public relations fight.

"Essentially, they said, 'This is where we are going to make a stand' and flooded the region with fighters," said Col. Edward Sholtis, a spokesman for U.S. Air Force Central Command.

I suppose this counts as good news, although it gives one pause that it took 700 US airstrikes and four months of fighting to drive the would-be Caliphate from one insignificant town, which now will be held by a splinter group of Kurdish peshmerga with no particular legitimacy.
Posted by John at 12:31 PM

Air strikes work great against standing armies that field vehicles as their chief fighting forces and that rely on static emplacements and infrastructure. When the enemy's capacity to effectively fight and govern is based in their having tanks, radar sites, airports, bridges, and the like, you can bring them to a halt pretty quickly with a withering hail of missiles.

But against an urban insurgency comprised chiefly of personnel rather than materiel, airstrikes are of minimal use. It's one thing to bomb a column of tanks, even in the center of a major city, but it's another thing entirely to root out foot soldiers dispersed among untold numbers of buildings and surrounded by untold numbers of civilians. Unless you're prepared to sanction massive collateral damage, you're stuck waiting for targets to make themselves vulnerable. Which is why you absolutely have to have boots on the ground to root the enemy out. Airstrikes still play a vital role in supporting the grunts, but they can't win an urban infantry battle on their own.

700 airstrikes may sound like a lot, but over a battle lasting 130 days works out to roughly 5.3 a day: not rare, but not a furious rate of bombardment, either.

I'm not sure though, why one would be so sour over this campaign. Kobani may seem "insignificant" (like, say, Trenton) but (like, say, Trenton)its psychological significance is potentially enormous. ISIS obviously thought it was important to keep up its reputation for victory, and it has failed to do so, demonstrating to several relevant audiences (eg., Kurdish fighters) that they are not invincible.

On the point of airstrikes aren't enough, that's absolutely true. But there of course was an infantry force present that did most of the fighting; it just wasn't American. One may also add that over the summer ISIS did take to fighting more like a conventional army, with tanks, artillery, etc.; and they do travel everywhere in columns of Toyotas, like most insurgents these days.

"...and they do travel everywhere in columns of Toyotas, like most insurgents these days."

And like a lot of refugees and civilians do, too...

Yes, David, it may turn out to be important that ISIS was beaten in a battle they chose to make a big deal of. I have been fantasizing that a couple of such defeats and they might collapse completely. Their casualties may have been in the hundreds but that might have come from their most aggressive soldiers, so the loss might hurt.

Perhaps a bigger question in the long run has to do with the people who beat them. As I said, this is a Syrian Kurdish splinter group, not really part of the Kurdish state in Iraq, whose only ambition seems to be controlling the small Kurdish majority part of Syria. No doubt they got help from other Kurds, but even if they win a complete victory they aren't going off on some long advance. They only want to keep ISIS out of their own back yard. So this may have no impact at all on events in Mosul or Anbar.