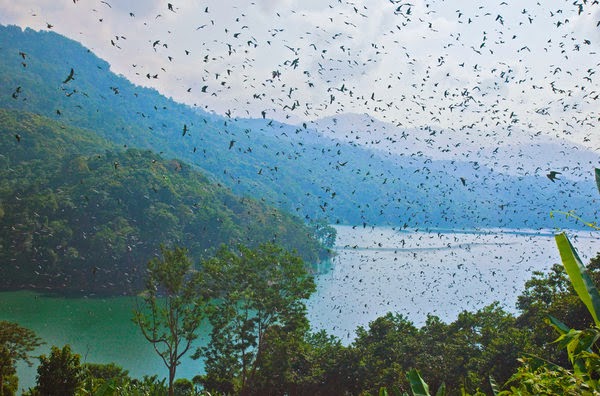 Every year hundreds of thousands of Amur falcons migrate through a small, mountainous area of northern Burma, on their way from their winter homes in India and Africa to their summer homes on the steppes. Until a couple of years ago, local villagers regarded this bounty as mana from heaven and slaughtered the weary birds by the thousands for food; one local official estimated the kill at 100,000 to 400,000 birds per year. Some people earned as much as $500 a year, more than half the average local income, just from selling dead falcons. 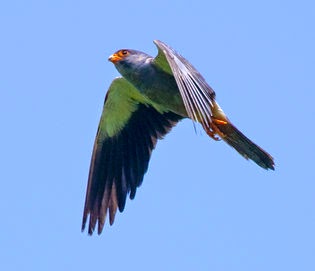 After some conservationists made videos of the slaughter, local officials were shamed into taking action against it. With the help of conservation groups they started a program to protect the birds, with the idea that the villagers could make up for the lost income by attracting western tourists. However, this is a violent corner of the world and hardly anybody goes even to the safe parts of Burma, so the tourists have not appeared and there are rumblings about going back to hunting. So if you want to take an eco-tour that might really help rather than hurt the earth, how about a birding trip to northern Burma?
Posted by John at 8:00 AM

Wouldn't it be smarter to just educate the population of the dangers of this kind of thing, and the unforseen consequences that can result? China's Great Sparrow Campaign leaps immediately to mind as an example that Burmans should be able to easily appreciate.

If nothing else, couldn't other nations always apply political pressure? The birds are just as much creatures of India and Africa as they are of Burma - surely major players in those regions could declare the animals as some form of "National Treasure" or the like and condemn the killings?

As a last resort, could the migration route somehow be altered, perhaps via human intervention? If the birds can be made to adapt their migration to avoid the dangerous region, the problem ceases to exist.