Reading the Scorched Papyri of Herculaneum 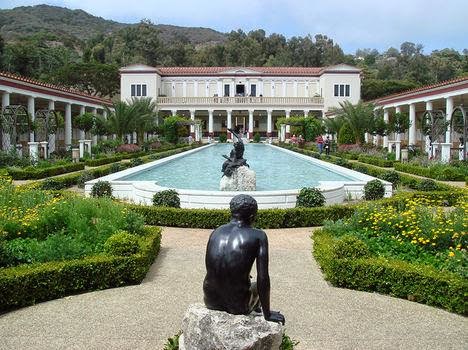 Digging into the remains of Herculaneum in 1752, archaeologists discovered something rather startling: intact, charred papyrus scrolls, possibly representing a whole library buried by hot rock and ash in the eruption of Mount Vesuvius in 79 AD. More than 1,700 scrolls were recovered.

A few of these scrolls were in such good shape that a machine developed by Antonio Piaggio was able to unroll them intact, so that they could be read. Sadly they turned out to be books by minor and justly forgotten Epicurean philosophers. But you can't have everything, and at least we had acquired some new works from the ancient world. 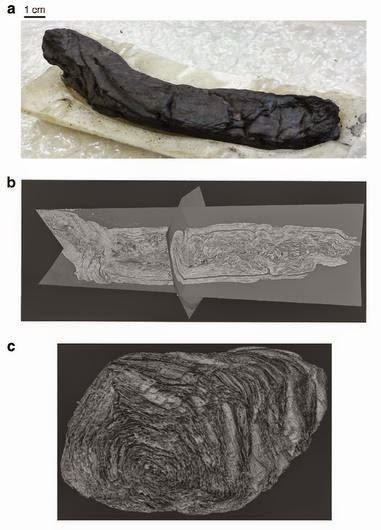 One of the scrolls used in the current study

But most of the rolls were too fragile to be unrolled, not matter how slowly and carefully. So they have been sitting around for 260 years, waiting for someone to find a way to read them. X-rays were tried long ago, but to ordinary x-rays the carbon-based ink looks just like the paper, so no luck there. But these days of course our imaging technology is vastly better than it was even 20 years ago.

Using a technique called X-ray phase contrast tomography, a group of Italian researchers led by Vito Mocella has been able to read at least a few letters and words from a rolled-up scroll. Nothing exciting has yet been discovered; this is what the investigators described as a "proof of concept." Eventually we should have even faster and more precise machines, which when hooked to a supercomputer might allow reading all the surviving scrolls in a reasonable amount of time.

Plus, 2,800 square meters of the Villa of the Papyri (reconstruction at top) remain to be excavated, and some people expect to find other rooms full of scrolls, some of which might not be by justly forgotten philosophers. Almost all of the hundreds of thousands of books that circulated in the Roman world have been lost, but maybe, just maybe, these methods will allow us to recover a few of the missing ones.
Posted by John at 8:22 AM