Drones and Revolution in Yemen 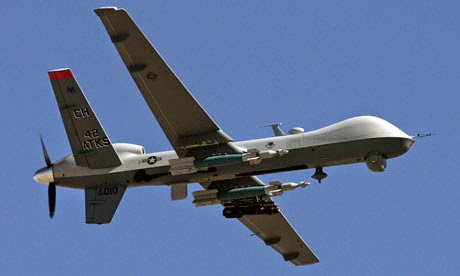 For the past five years the US has been deploying drones in Yemen to attack the leaders of Al Qaeda in the Arabian Peninsula and other insurgent groups. We did this with the support of Yemen's president, Abdu Rabbu Mansour Hadi, who liked having American air power to strike at his domestic enemies.

Now Hadi's government has collapsed and it looks like Yemen may be partitioned between Al Qaeda and another group of rebels backed by Iran, called the Houthis. The Houthis are mainly Shiite, Al Qaeda and its allies mainly Sunni, and without any central government to hold the place together, who knows what may happen?

Behold the fruits of our drone foreign policy. Every missile we fired at Yemeni rebels has, in the end, only added to Yemen's misery. Whatever the government gained by having its enemies blown up was lost by the growing perception that Hadi was an American tool, and as he depended more and more on American backing he lost the support of Yemenis. When Houthi rebels took the capital and surrounded Hadi and his cabinet, nobody rose up to help them.

It is not yet certain that Yemen will descend even farther into chaos. Hadi's resignation seems to have been a political move aimed at forcing the Houthis who were holding his government hostage to ask him back, but it looks like they are simply going to let him go and organize a new government without him and his supporters. Who knows, they may succeed; maybe the Yemeni factions will all bond over hating the US and our drones, and so our cruel idiocy will make some positive contribution to the place after all.
Posted by John at 7:26 AM

I think you're vastly overestimating the role played by US policy. Yemenis are perfectly capable of generating their own reasons for fighting each other, and the Sunni-Shia divide is much older and far deeper than any feeling, good or bad, that Yemenis have about the US or anything it does or stands for. Much like the fights among Thais, these quarrels are internally-generated. As for foreigners, the roles of Saudi Arabia and Iran are much greater, because they play to things that Yemenis care about.

Maybe so, but if you're right the drones and the deaths they inflict haven't made any difference one way or the other. Is that an argument for using them?

I don't have the impression that, at least under Obama, making things better for Yemenis has been part of the rationale behind drone strikes in Yemen. I thought it was based simply on the principle of hitting al-Qaeda. One could debate that principle separately, but it IS a separate principle from helping Yemenis.