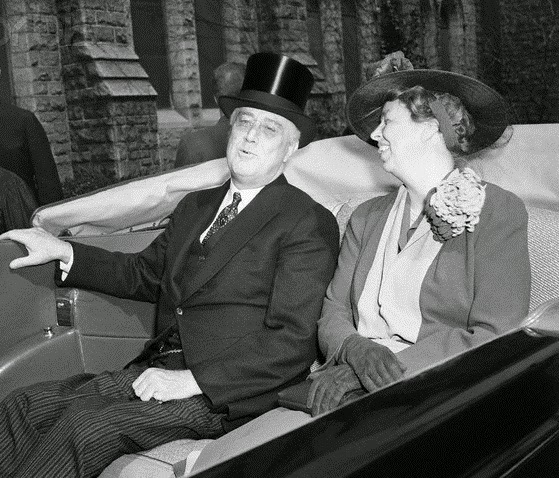 No Ordinary Time is a great book, fully deserving of the Pulitzer Prize it won in 1994. It interweaves the story of Franklin and Eleanor Roosevelt with the story of America during World War II, and I thought it worked wonderfully. It is part biography, part narrative of a marriage, part social history, part diplomacy, and all excellent.

Eleanor and FDR were one of history's great power couples. In the White House Eleanor served as their conscience, always pushing to do more for blacks, women, refugees, and the poor. FDR was the politician, always aware of what could be done in the circumstances at hand. Without her husband, Eleanor would have been another activist with a megaphone; it is easy to imagine that without his wife's constant prodding FDR would have slid into the politics of the moment and lost sight of their long-term goals. This seems especially true of the war years, when even many liberals thought that civil rights and workers' rights had to be put on hold until the Nazis had been beaten. Not Eleanor, who thought winning the war was pointless if it did not mean improving the lot of the oppressed at home as well as abroad. Between the intense demand for labor of all sorts and the pressure of the Roosevelts, the war did turn out to be a watershed in American social history, vastly accelerating movement toward equality.

Eleanor and FDR were also two strange and fascinating people who had a strange and fascinating relationship, and I thought Goodwin did a great job with their private lives. I won't try to summarize their marriage glibly, because what I thought Goodwin did so well was allow her picture to grow up gradually from anecdote after anecdote, rather than providing some simple formula of what the Roosevelts were like. I was left feeling tolerant, marveling at the multifarious ways we find to interact and the many ways we can draw strength from each other, even while causing each other pain.

One of the biggest impressions I got from this book was a jarring shock at the politics of America in 1940. Eleanor was a socialist, in a way that no prominent figure of contemporary America could possibly be. Her impulse was always to nationalize everything and put a board of experts in charge, so it could be done rationally. In 1940 she wanted universal conscription of all men in America, with a Labor Board that would then assign them to the military, arms production, farming, or wherever else they could best serve the country. That was, after all, what the Soviets and the Nazis did. The whole rhetoric of the New Deal feels like an echo of a forgotten time, as strange as anything said in Byzantium. To me, raised in the individualism of the post 1970 world, it also feels creepy. Eleanor's words summon up for me a gray vision of concrete housing projects full of people in uniform, carrying out their state-mandated labor duties, followed by state organized exercise and meals in cafeterias run by the Board of Hygiene.

On the other hand Eleanor's opponents were also nasty to a degree that makes me cringe. The naked racism, sexism and anti-semitism mouthed by everyone from Southern Congressmen to establishment WASPs in the State Department makes my jaw drop. The anti-semitism is particularly shocking. Eleanor's attempts to admit Jewish refugees were blocked by the State Department and Congress; even Jewish nuclear scientists were admitted only after FDR's personal intervention. "No more dirty Jews here" was a battle cry that seemed to unite all American factions. Observing this Goebbels wrote in his diary that although the US and Britain publicly protested the Nazi treatment of Jews, their own actions showed they were secretly happy to let Germany solve the Jewish problem. He had a point.

That all this feels shocking to a 21st-century reader is a measure of how far we have come since 1940, and thus, partly, of the Roosevelts' achievement. To read the eulogies for FDR is to be shocked that people could ever love a President so much. It was indeed an extraordinary time, the Roosevelts were extraordinary people, and this is an extraordinary book.
Posted by John at 8:38 AM