The Aphorisms of Don Calacho 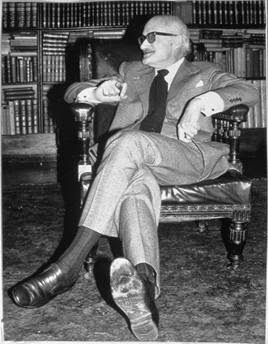 Nicolás Gómez Dávila (1913-1994) was Latin America's most famous literary curmudgeon. Don Calacho, as his friends called him, was born into a wealthy Colombian family, the son of a successful industrialist. He grew up mostly in Europe, attending schools in France and England; he was confined to his bedroom for nearly two years due to a severe illness, during which time a tutor instructed him in Greek and Latin. He returned to Colombia at 23, married and fathered three children but otherwise avoided doing anything "serious" with his life. He never took a job and refused offers of political posts and ambassadorships, preferring to play polo and read. He decided to become a writer but was, he said, too lazy to write a long text like a novel. Instead he wrote essays and aphorisms. His first book appeared in 1954. He showed his contempt for the mass culture by deliberately publishing his works with obscure publishers in tiny print runs, but eventually became famous nonetheless.

I have spent hours over the past few weeks reading over Don Calacho's 3,000 aphorisms, and while I have often been irritated I have always been fascinated. There is wit and sarcasm here, but also wisdom:


Envy tends to be the true force behind moral indignation.

Man prefers to excuse himself with somebody else’s fault rather than with his own innocence.

The surest ways of winning are more disastrous than any defeat.

One usually does not reach conclusions except by ignoring objections.

Calacho was the sort of conservative whose attitude comes out mainly as a contempt for whatever is fashionable at the moment. Since the twentieth-century birthed so many terrible fads, he had a great deal of material to work with. I very much appreciated his art criticism:


The most serious charge against the modern world is its architecture.

A work of art has, properly speaking, not meaning but power.

Contemporary criticism is unreadable and makes the work it analyzes unreadable.

Calacho liked to describe himself as a reactionary, but he had little of the willful ignorance one associates with such a pose. He lived through the great wave of Marxism agitations and revolutions in Latin America and always opposed any notion of revolutionary change. He could be even more scornful of democratic "reform," and one gets the impression that he thought Marxists were at least honest about their own brutality:


Democratic elections decide who may be legally oppressed.

And yet he was not really impressed by organized conservatism, either.


Modern man believes he lives amidst a pluralism of opinions, when what prevails today is a stifling unanimity.

Many of the aphorisms show a sort of exasperated moderation, the voice of a man who was tired of radical pronouncements:


Order is a deception. But disorder is not a solution.

What is difficult about every moral or social problem is that its appropriate solution is not a question of all or nothing, but of more or less.

Not reject, but prefer.

Notions of progress annoyed him:


The Gospels and the Communist Manifesto are on the wane; the world’s future lies in the power of Coca-Cola and pornography.

Nobody in politics can foresee the consequences either of what he destroys, or what he constructs.

Civilization is what old men manage to salvage from the onslaught of young idealists.

Reason, truth, justice, tend not to be man’s goals, but the names he gives to his goals.

Like many well-educated curmudgeons, Dávila spent much time with his books:


Writing is the only way to distance oneself from the century in which it was one’s lot to be born.

Everything in the world ultimately rests on its own final “just because.”

An “explanation” consists in the end in assimilating a strange mystery to a familiar mystery.

Dávila's cynicism was softened somewhat by his profound Catholicism. Not that he thought much of the contemporary church, but his faith was deep; I thought his jottings on religion were among the most interesting I have read in a long time:


The Bible was not inspired by a ventriloquist God. The divine voice passes through the sacred text like a stormy wind through the foliage of the forest.

The Christian does not pretend that the problems posed by religion have been solved; instead, he transcends them.

The prophet is not God’s confidant, but a rag blown about by sacred storms.

I probably could not read a book by Calacho, or even an extended essay; one can only take so much mockery of reform from a man born filthy rich, so much defense of regimes guilty of awful crimes. He was certainly right that political Marxism was not the answer to Latin America's troubles, but that is hardly the same thing as accepting that no political or economic improvement is possible.


After solving a problem, humanity imagines that it finds in analogous solutions the key to all problems. Every authentic solution brings in its wake a train of grotesque solutions.

Upon finding himself perfectly free, the individual discovers that he has not been relieved of everything, but despoiled.

I value some of these aphorisms for their wisdom, others because I value skepticism for its own sake. I think it is important to fight conventional thinking and step outside the prejudices of your own ideology. I am anything but a reactionary, but I certainly admit that the modern world has exalted all manner of falsities from the trivial (behavioral psychology) to the profound (wars for peace). Skepticism is essential if we are not to get swept up in the enthusiasms of our own time (the War on Terror, for example) and become the advocates of great crimes. So a few more:


Only the years teach us to deal with our ignorance tactfully.

There is no sociological generalization that does not appear inadequate to the man to whom it applies.

The will is granted to man so that he can refuse to do certain things.

We are fully convinced only by the idea that does not need arguments to convince us.

In the intelligent man faith is the only remedy for anguish. The fool is cured by “reason,” “progress,” alcohol, work.

Swimming against the current is not idiotic if the waters are racing toward a waterfall.

Pain, evil, sin, are certainties we can lean on without fear that they will break.

The fool calls conclusions he does not understand “prejudices.”

The 19th century did not live with more anguish because of its sexual repression than the 20th century with its sexual liberation. Identical obsession, even when the symptoms are the opposite.

Vanity is not an affirmation but a question.

No one is more insufferable than a man who does not suspect, once in a while, that he might not be right.

We can neither place conditions on life nor receive everything it gives.

That you for your posts. I appreciate what you collect. Just wanted you to know.