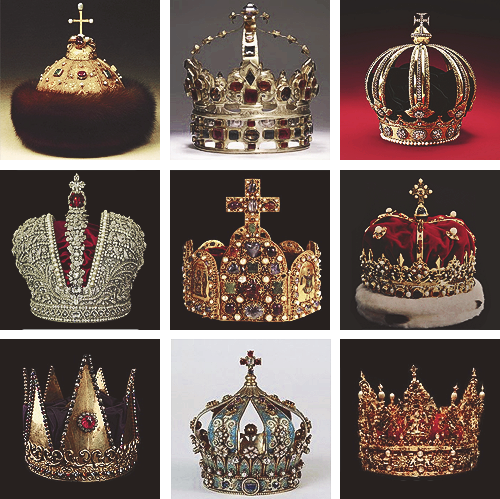 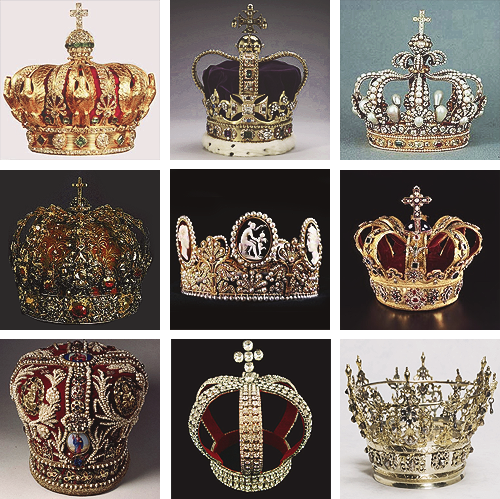 These two pictures have been making the rounds of art and history sites on Tumblr, and I spent a pleasant hour figuring out what some of them are. Sadly the third from the top along the left side, which intrigued me, seems to be from a movie. Top left is just what you think, an old Russian crown said to have belonged to Ivan the Terrible. 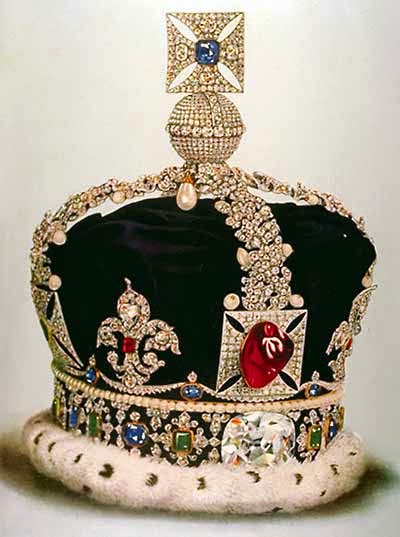 One thing I discovered doing my "research" is that there are A LOT of crowns in Europe. Well over a hundred, anyway. I mean, some of these families have consorts and princes and princesses and so on, Plus some of the royal families have accumulated several kingdoms, for which they have separate crowns. Above are the British imperial crown and the separate Scottish crown. There is also an imperial crown of India, which I suppose they don't wear any more. The British imperial crown includes the "Black Prince's Ruby," which is actually a red spinel, but on the other hand it actually was paid to the Black Prince in 1367 for his service as a mercenary in a civil war in Castile. 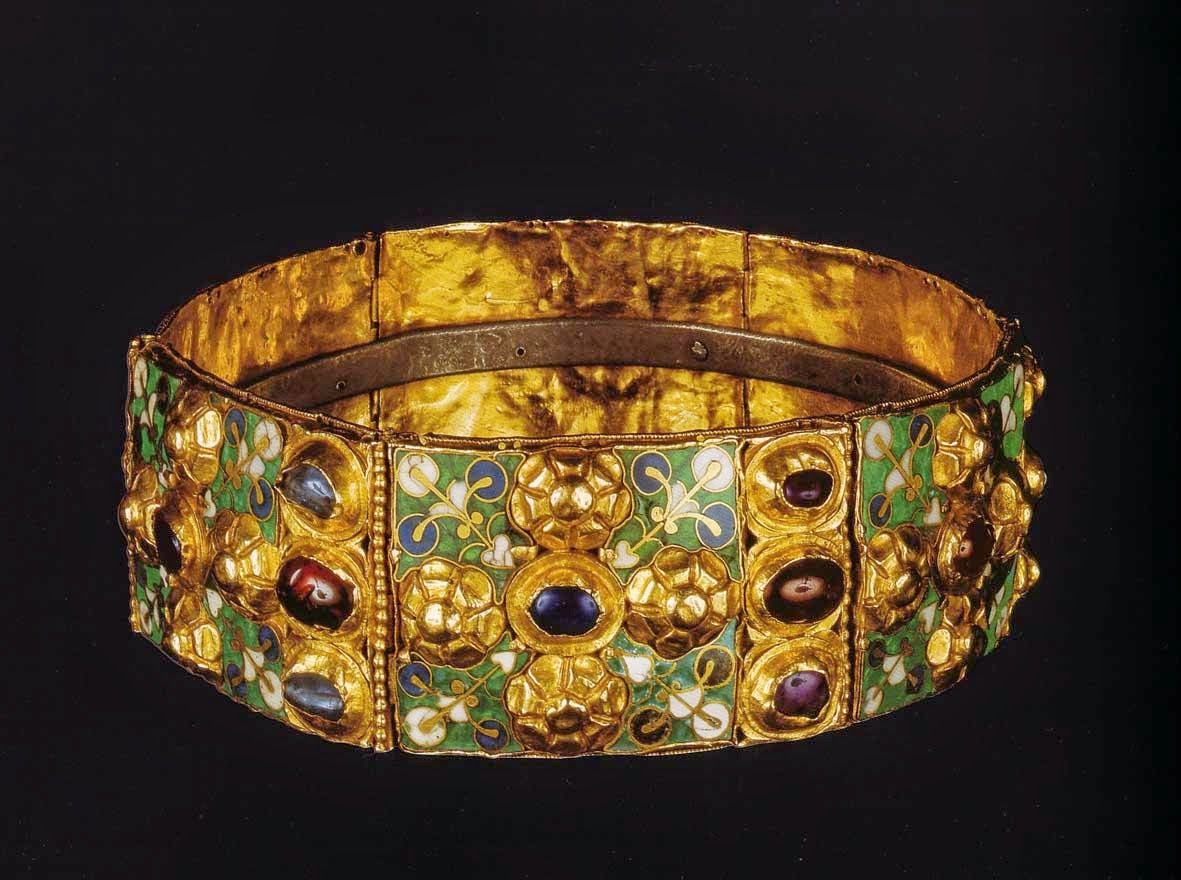 This is the Iron Crown of Lombardy, dating to the eighth century. It is said that this started as a plain iron circlet, completely unadorned; one story has it that the iron came from the nails of the True Cross, another that they came from Emperor Constantine's bit and bridle. Somehow the iron circlet ended up covered by gold schlock. No European monarch has ever had the nerve to be crowned with a plain piece of symbolic iron. Wimps. 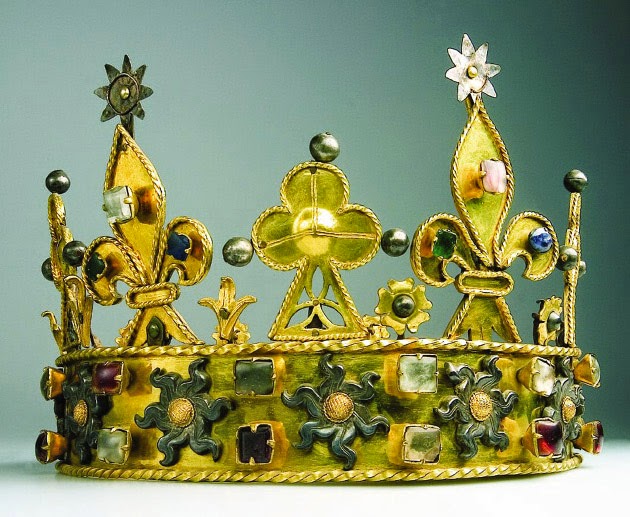 Quite possibly the most stylish ruler in European history was Philip the Bold of Burgundy, and this is his crown in case you wanted to know what the truly fashionable wore at their coronations. 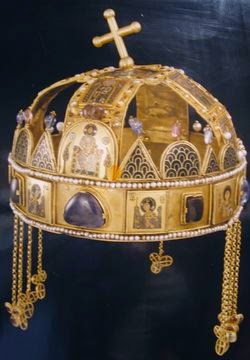 The crown of St. Stephen of Hungary, c. AD 1000. This was a present from the Byzantines. Legend has it that the Pope also sent a crown, but that his messenger was delayed, so the Byzantines got to dictate royal fashion in Hungary. Nineteenth-century photographs show the cross standing straight, so I don't know why they let it sit askew like this. 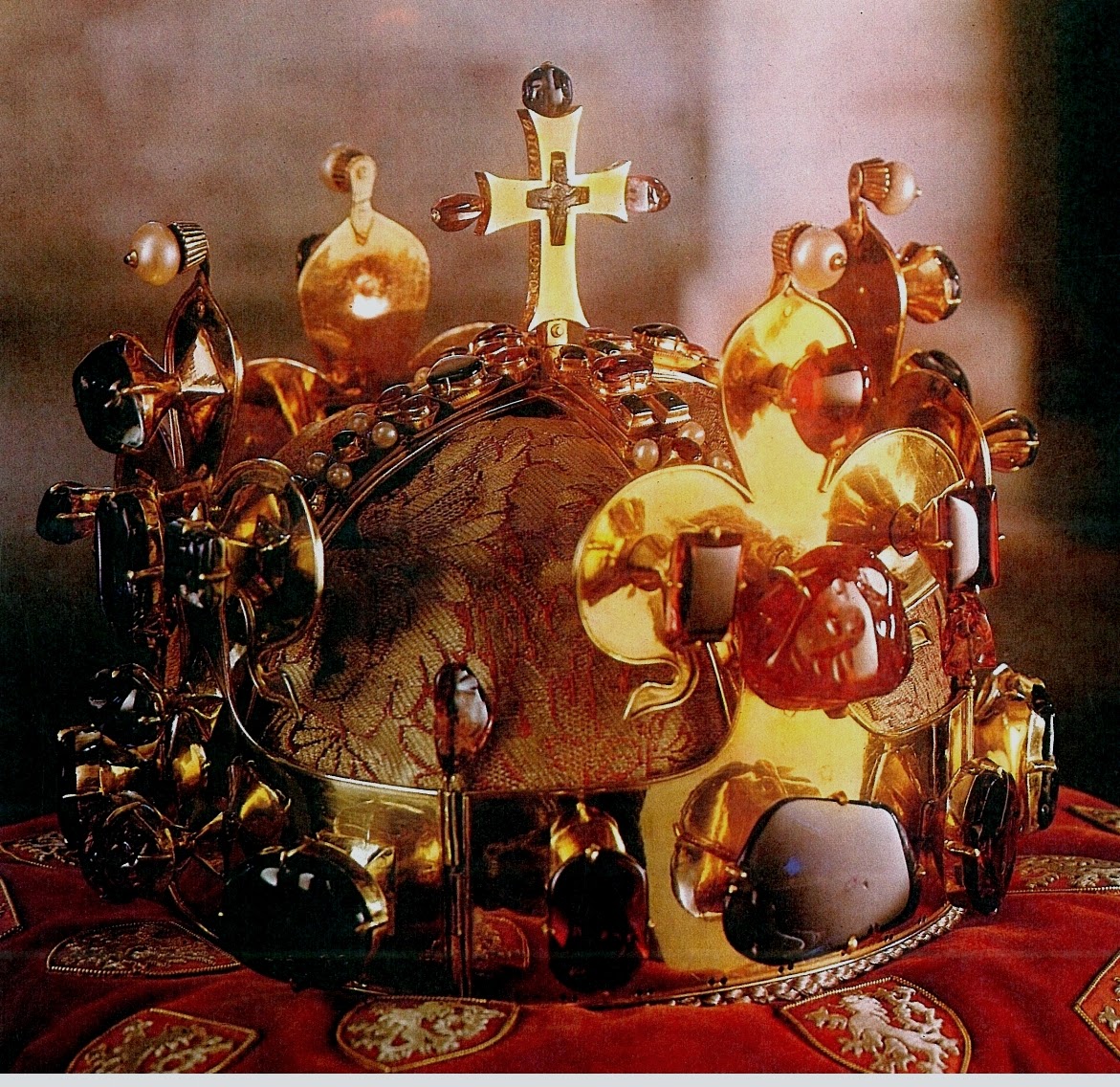 The crown of Good King Wenceslas. (Notice that carving gems to have facets is a modern habit.) In this fourteenth-century crowns you can already see crowns moving away from a sort of ring and toward a complete headpiece. 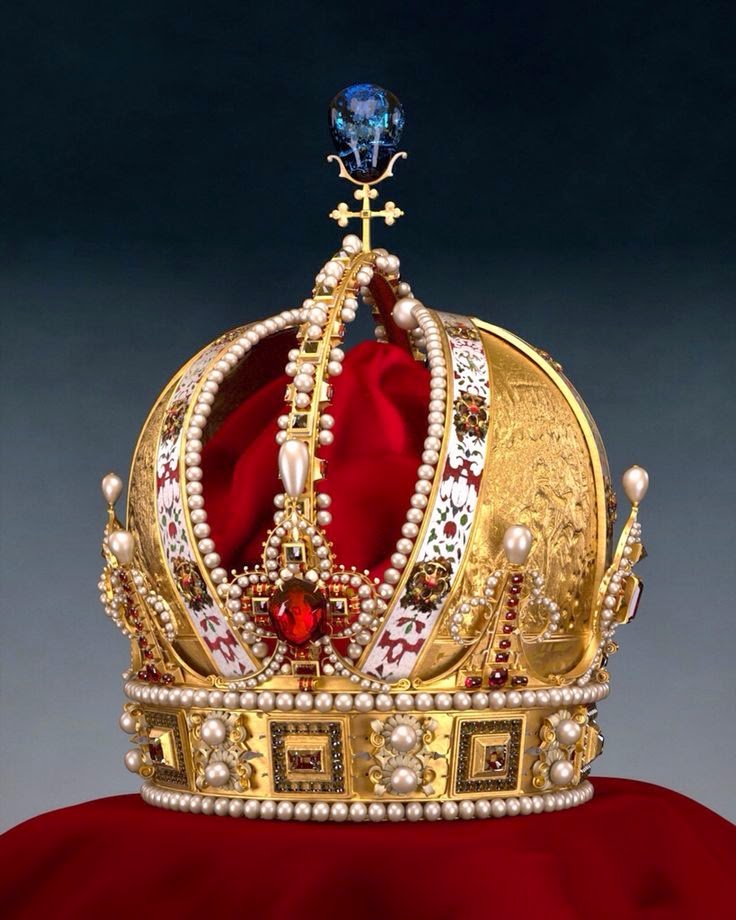 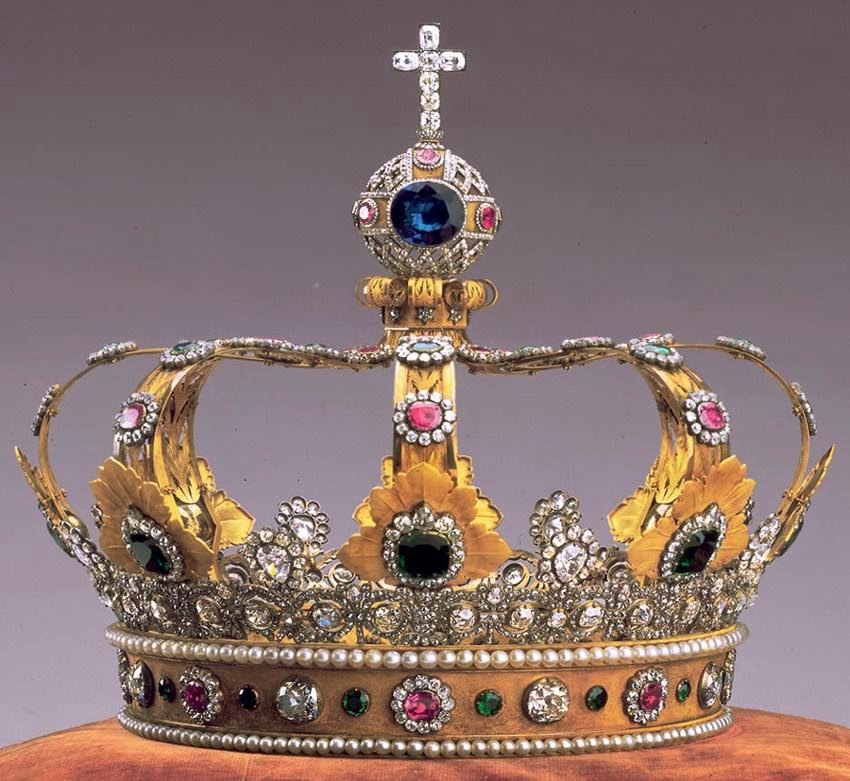 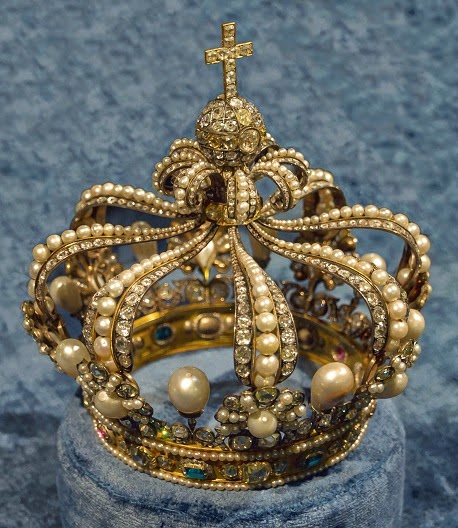 Two crowns from nineteenth-century Bavaria, the king's and the famous Pearl Crown of the queen. 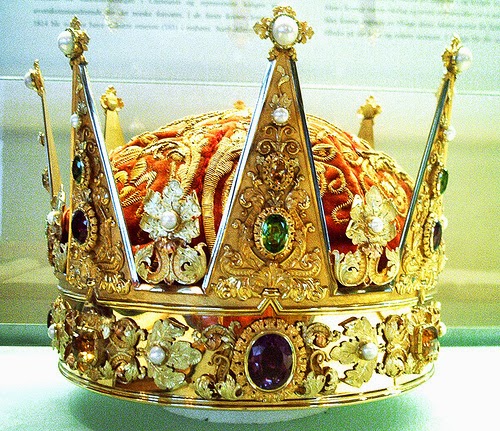 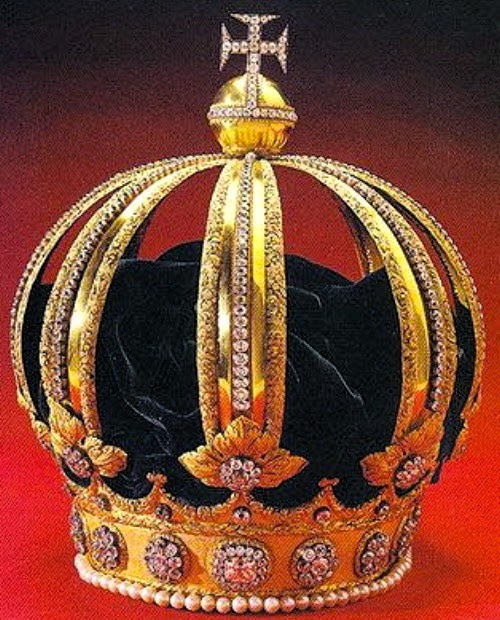 Crown of the emperors of Brazil. 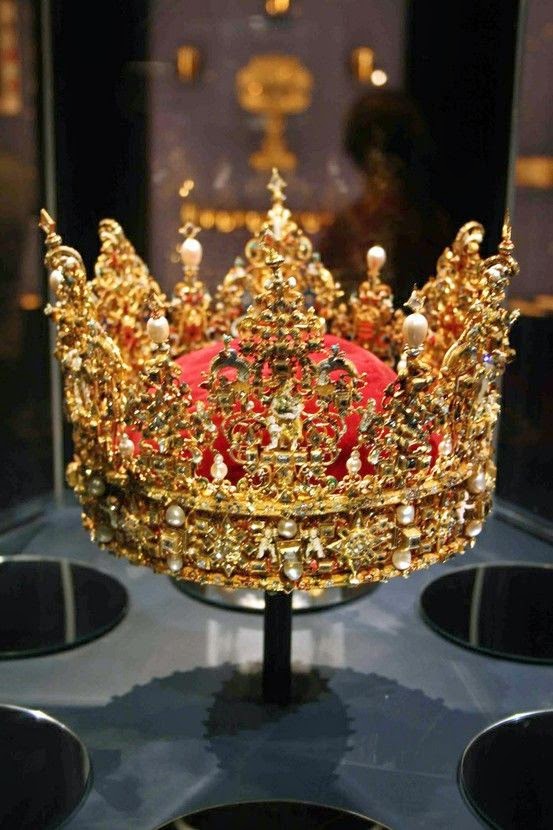 The crown of Denmark, which of all these comes closest to my childhood idea of a crown. 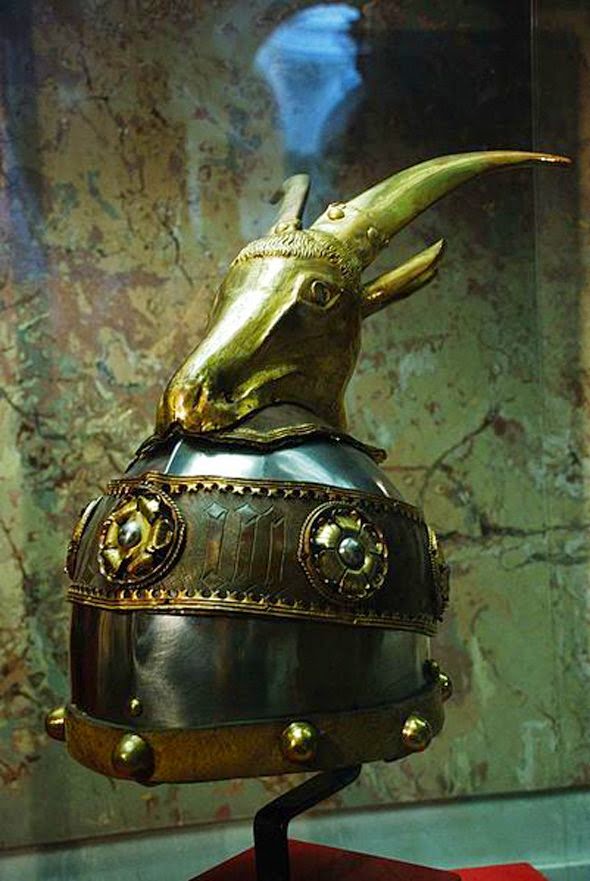 This thing, now in Vienna, is said to have been the ceremonial helmet of the Kings of Skanderberg in modern Albania. 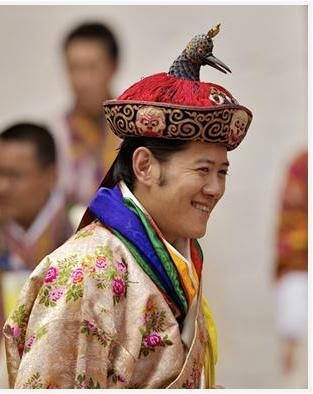 And my personal favorite royal crown, the Raven Crown of the King of Bhutan. The Raven Crown sounds like something I would want to put in a story but might be too embarrassed to actually leave in. But my version would be made of iron.
Posted by John at 8:54 PM

"So why do you all take orders from that one guy?"

"Because he's got a band of shiny and expensive minerals wrapped around his head!"

Actually, the reality was often more like, "Why isn't anyone listening? I have a band of shiny expensive minerals wrapped around my head!"

My husband heard us laughing over the crowns and asked what we were doing. "Shopping" my daughter said.