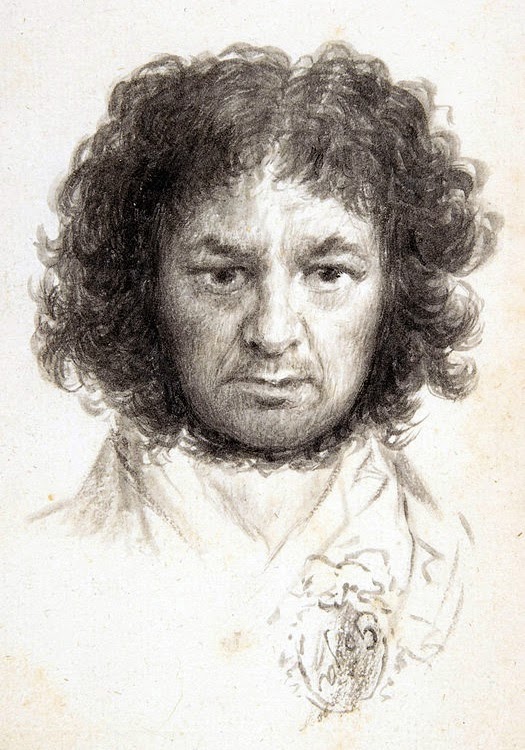 Francisco de Goya y Lucientes (1746-1828) had two separate artistic careers. During the first he rose from artisan's son to court painter of Spain and became an intimate of the royal family. The second began with Napoleon's overthrow of the Bourbon dynasty in 1808, as Goya chronicled first the six years of civil war and atrocity that followed and then his own descent into madness and isolation. (Self Portrait, 1795). 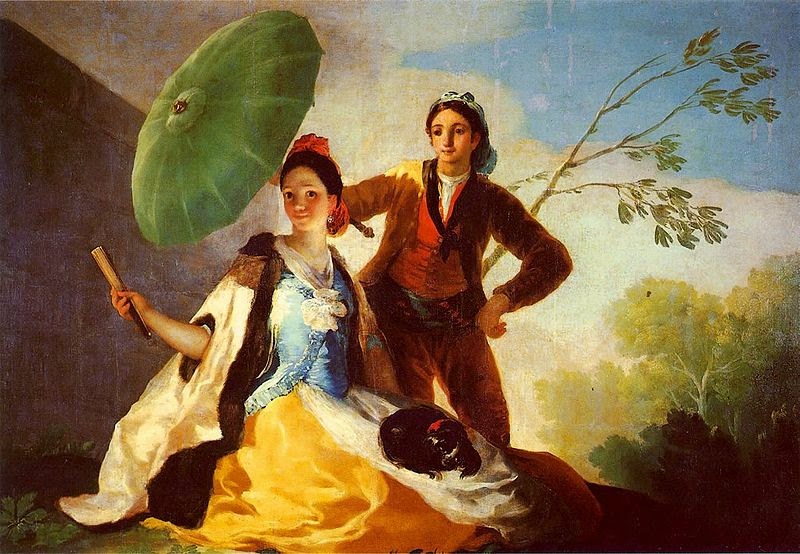 Goya became a painter's apprentice at the age of 14. He bummed around Spain and Italy for the next several years, doing odd jobs like painting church frescoes. His first real job was painting designs for tapestries to be made in the royal factories in Madrid, of which this is one. 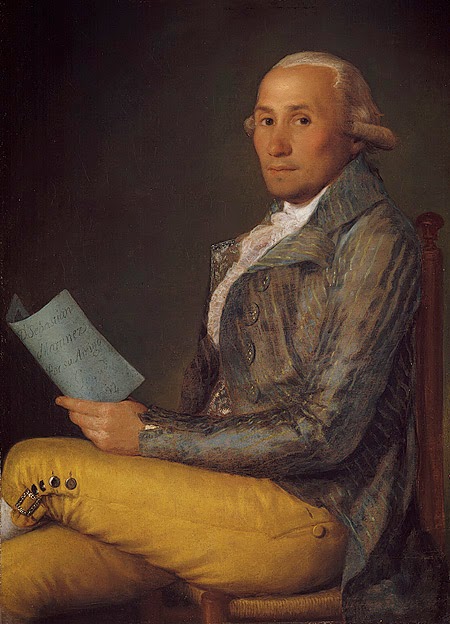 It was through the royal tapestries that Goya first met members of Spain's aristocracy, and by 1783 he was getting commissions to paint their portraits. This is one of my favorite Goya portraits, Don Sebastián Martínez y Pérez, 1792. He looks like he should be arguing politics with George Washington, after a tour of his estates to discuss agricultural reform. And have I ever mentioned how much I love the names of Spanish aristocrats? 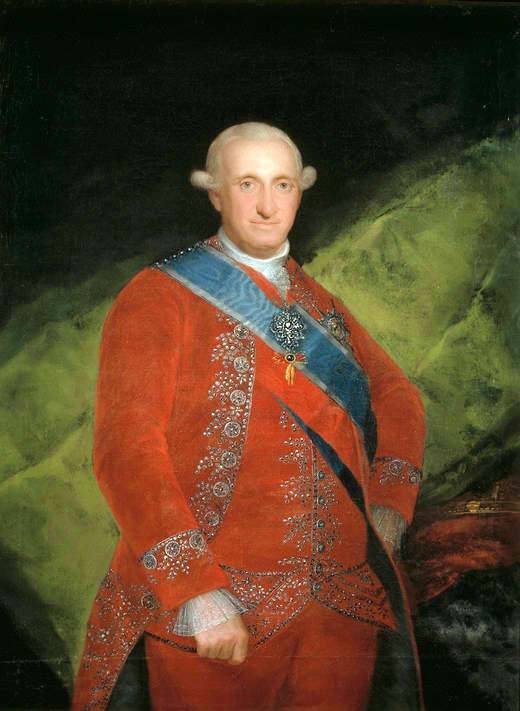 In 1789 he was made court painter to the king and queen, and he made many portraits of the royal family together and separately. King Carlos IV in Red, 1789. 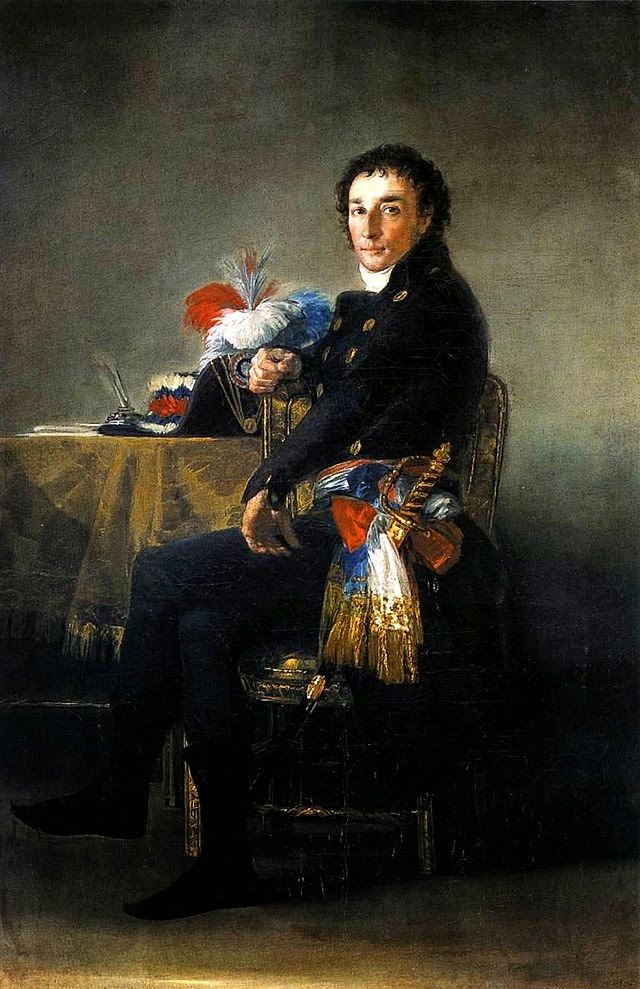 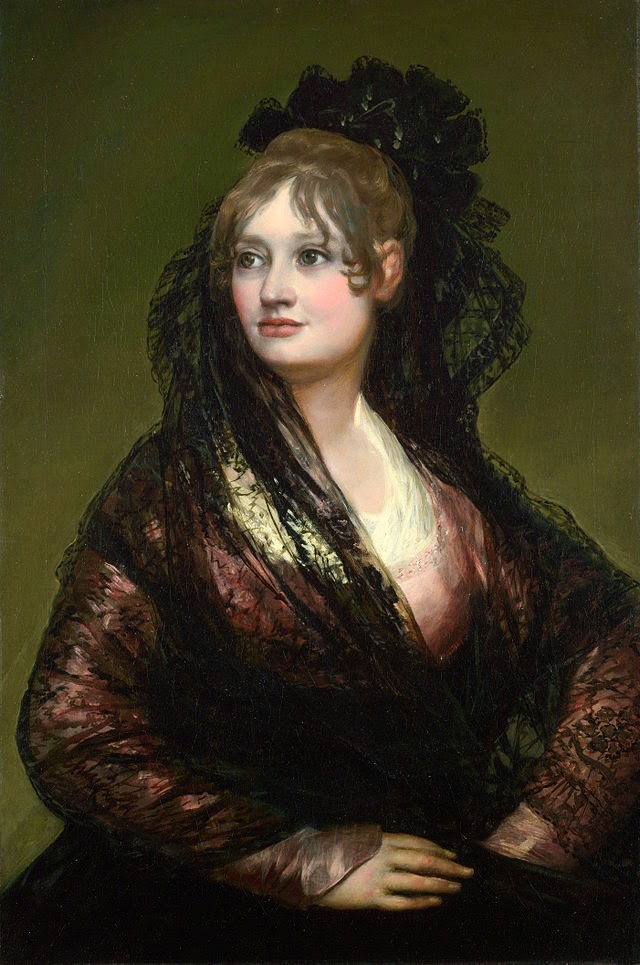 In 1792 Goya suffered a severe illness and emerged largely deaf. His career seems not to have been affected, and he kept turning out these wonderful portraits of the Spanish elite. Ferdinand Guillemardet, 1798; Dona Isabel Lobo Velasco de Porcel, 1805. 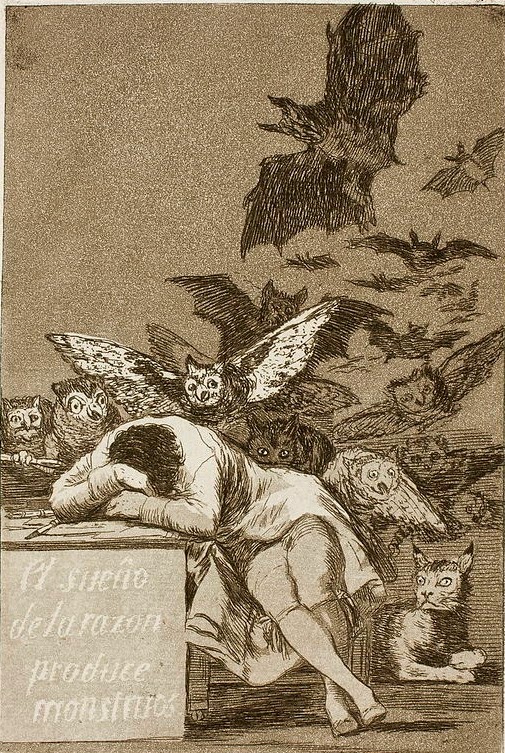 The 1790s were a time of great revolutionary ferment in Europe: in politics, in intellectual life, in art. Goya generally found himself on the side of the Romantics in art and the aristocrats in politics; here is his famous etching, The Dream of Reason Produces Monsters (1797). 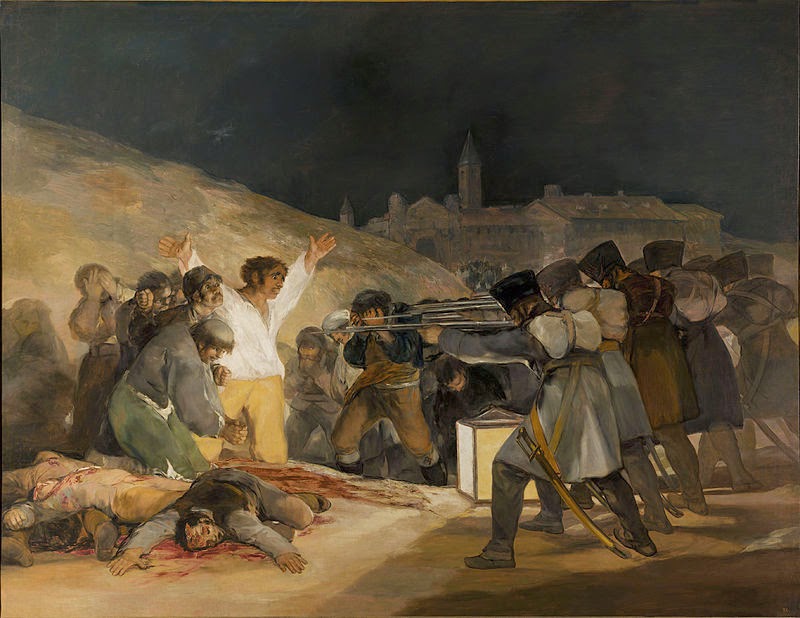 In 1808 Napoleon tossed out the Bourbon king of Spain and installed his brother Joseph as ruler. This inaugurated a six-year-long civil war marked by many atrocities on both sides. Goya seems to have remained neutral as much as possible, accepting commissions from Joseph and his French advisers while simultaneously working to document the horrors of war. Here is the famous Third of May, 1808, showing the execution of Spanish rebels by a French firing squad. 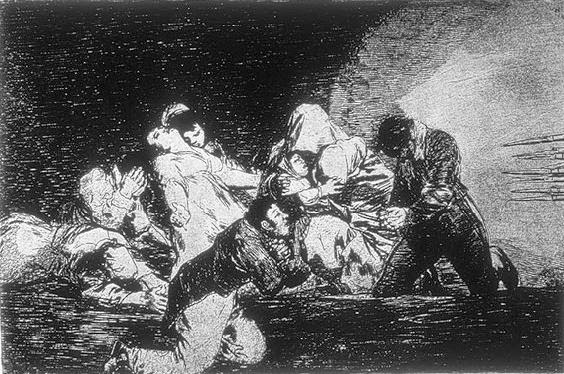 Over the next six years Goya created a series of 85 etchings titled The Horrors of War. Some of them are horrific scenes of torture. Many, like this one (One Can't Look) focus on the victims of atrocities, with the perpetrators shoved of to the side or even out of the drawing altogether. These were not published until 1862, long after Goya was dead. 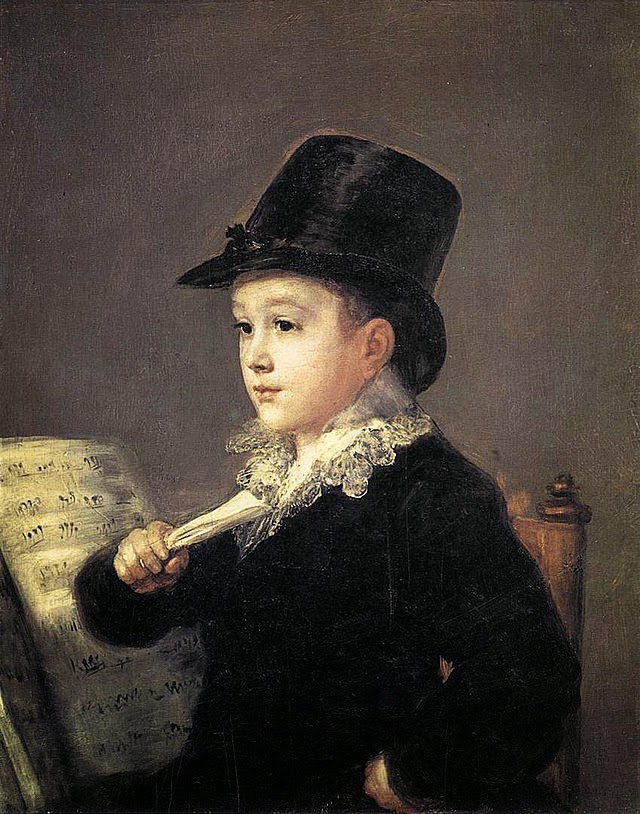 After the war Goya returned to his business of painting Spanish kings and aristocrats, and he produced some fine works in his old style. This is Mariano Goya, 1812-1813. 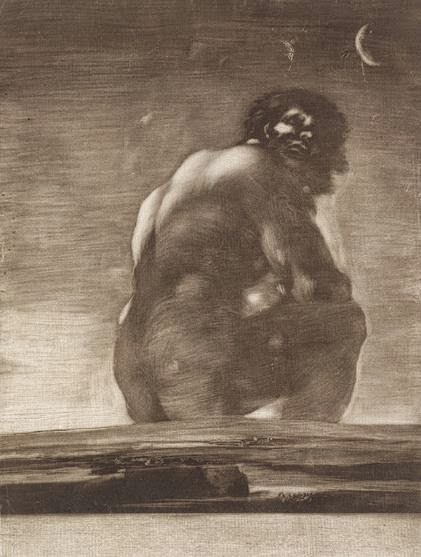 But underneath, something else was happening. Goya suffered long bouts of mysterious "illness" and did less and less conventional work. A grim, fantastic darkness settled into his work, as in this Giant, 1818. 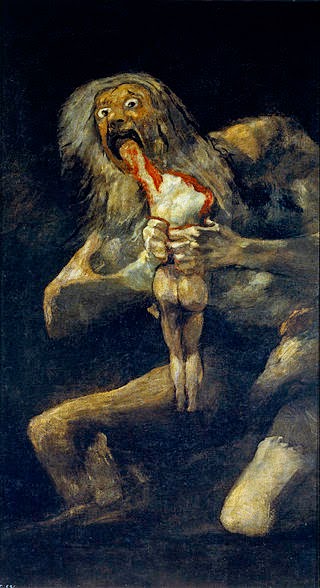 Goya lived for years in a place known as Quinta del Sordo, the Deaf Man's House. In the 1820s he spent much time shut up inside. It was eventually discovered that he was covering the walls with what we now call his Black Paintings. These were painted directly onto the plaster, and Goya never showed them to anyone or mentioned them in his surviving correspondence. Not until the 1870s were they cut out of the walls and moved to the Prado, and they may have been much altered in the process. This is Saturn Devouring his Child. 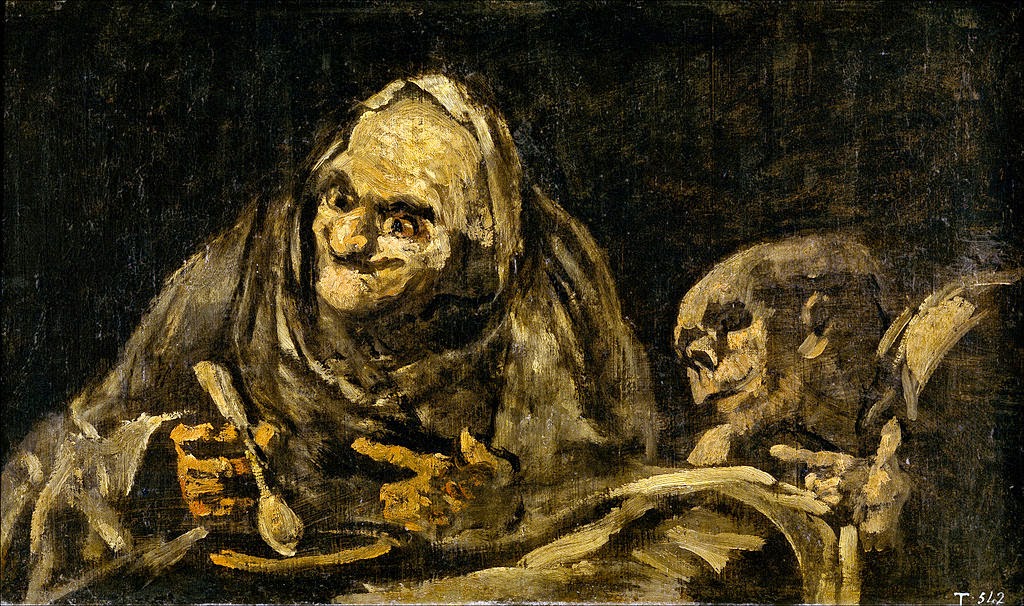 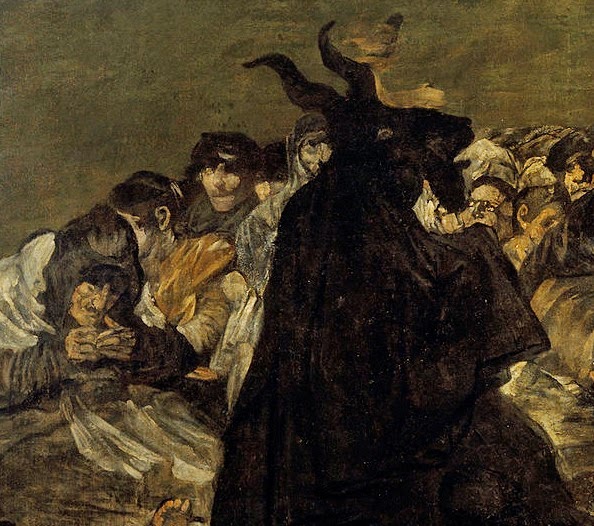 The Witches' Sabbath. Goya was obsessed with witches and their lore. Not that he had any fear of old women and their spells, but these images represented for him something deep about humanity and our innate cruelty. 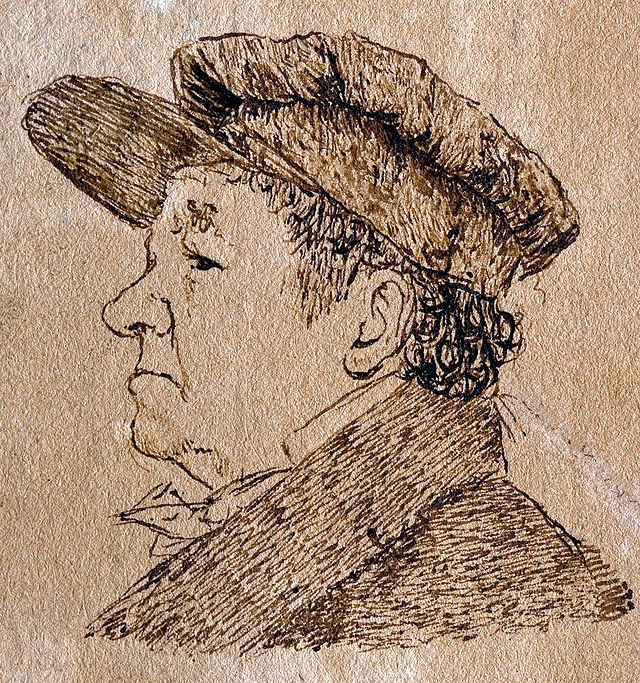 Goya's Self-Portrait of 1824. I confess that I never thought very hard about the chronology of Goya's career until I put this post together, and now I find myself wondering about his last years. Was he mired in despair, as some have said? If so, why didn't his friends remark on it more, and how was he able to keep painting portraits? Were the Black Paintings perhaps a way of coping with all the pain he had seen and depicted, a private ritual that allowed him to keep functioning as a public man?
Posted by John at 7:06 AM

Nicely done, thank you.
If you haven't yet seen Carlos Saura's Goya in Bordeaux it's worth a watch.

I don't think Goya's attitudes toward the Spanish royal family can be fully described without including some reference at least to the group portrait of 1801....