In Thailand, the Middle Class vs. the Peasants 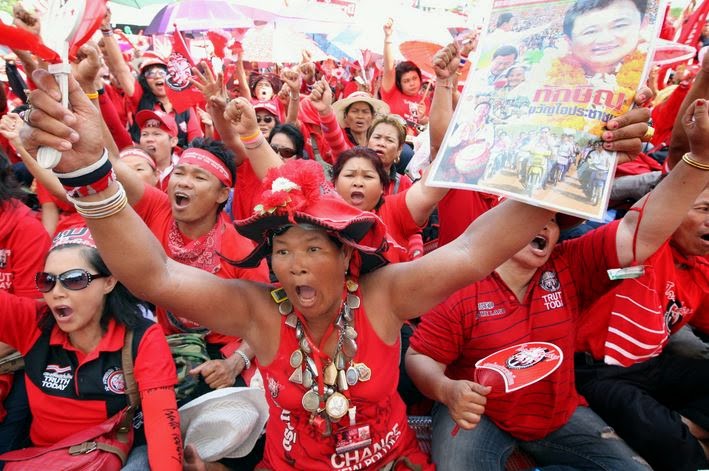 For twenty years Thailand has been torn by conflict between the urban middle class and the rural poor. Back in the early 90s the middle class rose up and drove the military from power, demanding democracy. At first they won the elections. But when poor people realized that the new government had no plans to help them they gave their votes to populist businessman Thaksin Shinawatra, who bacame Prime Minister in 2001. He proceeded to disperse government money to them through price subsidies for rice and other programs. This infuriated the urban elite and many of their middle class followers, and they organized massive protests (the Yellow Shirt movement) against Shinawatra's "corruption." Shinawatra's followers organized themselves as the Red Shirts to demonstrate in favor of his policies. As the country descended toward paralysis, the military came back and removed Shinawatra in a coup in 2006.

But nobody really liked the military government, and they seem not to have enjoyed holding power very much, so in 2008 they handed power to a new elected government. Both Shinawatra himself and his party had been banned, but this did not soothe the anger of poor Thais. In 2011 they voted a new party into power headed by Shinawatra's sister, Yingluck Shinawatra, and she went right back to the same redistributionist policies that had been her brother's trademark. The Yellow Shirts were predictably outraged, and they again drove the country toward paralysis until, early last year, the military again stepped in and removed Yingluck in another coup. 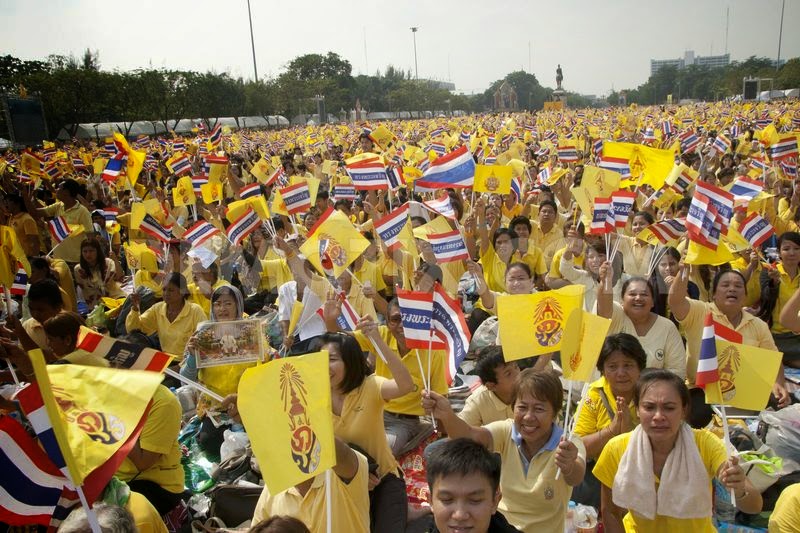 Having learned the lesson that they can't win elections, the Bangkok elite has shied away from democracy and supported the military's appointed legislature. Elections were recently postponed again, this time to mid 2016. And now they have moved against Yingluck Shinawatra in the same way that they drove out her brother:


The National Legislative Assembly, handpicked by the junta after the coup, voted 190 to 18 to impeach Ms. Yingluck on the grounds that the rice subsidies were a form of corruption.

The junta has not explained how people who no longer hold political office can be impeached.

Economists considered the rice program wasteful, and it angered members of the Bangkok establishment, who resented that their taxes were being used to pay farmers well above market prices for their rice. It was one of the key complaints of members of the Bangkok elite who led debilitating protests in Bangkok last year. They blocked voting in elections and pressured financial institutions to withhold payments to farmers.

Ms. Yingluck has defended the rice subsidy program as assistance for the poor. “Many governments have public policies to help farmers,” she said in testimony at the impeachment hearings. “It’s the government’s duty to look after them.”

And there you have it. Democracy cannot survive in a country where the economic and military power is concentrated on one side and the voters on the other. It may be that it can't survive if poor voters expect too much from the government. And it certainly is not a magical solution to all the problems of a troubled country.
Posted by John at 8:24 AM

"Wait... our democracy has led to the downtrodden masses receiving assistance, meaning we privileged elites are paying extra taxes!"

"Extra taxes? Good lord! Call in the military! This "democracy" nonsense has got to go!"

Thailand? Perhaps. Could equally well be many other countries. There are even factions in the US that lean this way.

We're such selfish creatures. We're so very strongly opposed to sharing our personal good fortune with those less fortunate than ourselves.