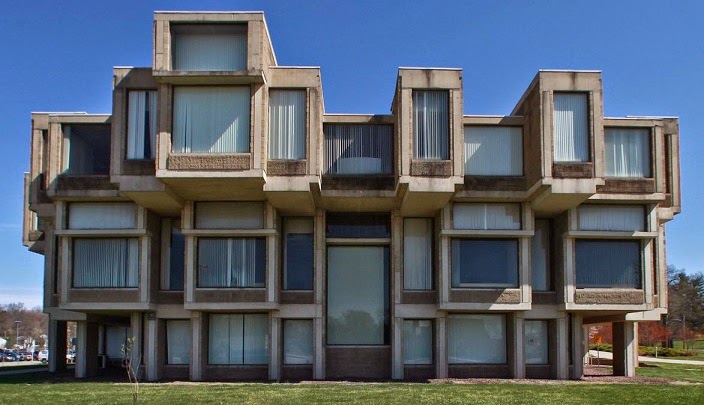 
announces itself as a civic hub. It’s made of corrugated concrete and glass, organized into three pavilions around a courtyard, like an old wagon train around a village green. A county proposal would tear down huge chunks of it, flatten the roof, destroy windows, swap out parts of the textured concrete facade and build what looks like an especially soul-crushing glass box. Goshen would end up with a Frankenstein’s monster. . .

Pictures of the interior from the early 1970s, when the center was still new, show a complex of animated spaces, by turns intimate and grand. Later renovations ruined the inside, making it cramped and dark. Rudolph was a master of sculpturing light and space, following in the footsteps of Frank Lloyd Wright, whose emotionalism he married to the cool Modernism of Europeans like Walter Gropius and Le Corbusier. 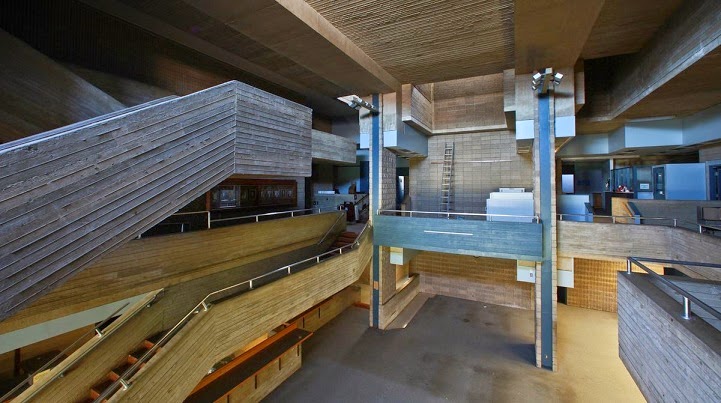 I, of course, hate this thing, and would be happy to see it reduced to rubble. But in this case there is an alternative proposal that may have some merit.


Although the center no longer seems to suit Orange County administrators, it can be repurposed. Gene Kaufman, the owner and principal of Gwathmey Siegel Kaufman Architects in New York City, has offered to pay the county $5 million for the building and restore it as an artists’ live-work space, with public exhibitions. Mr. Kaufman has also offered to design a brand new government center next door for $65 million — millions less than the $74 million county officials allotted some time ago for the plan to tear down part of the building and add the glass box.

Seems at least worth looking into, if all the county plans to do is replace concrete modernism with glass modernism. 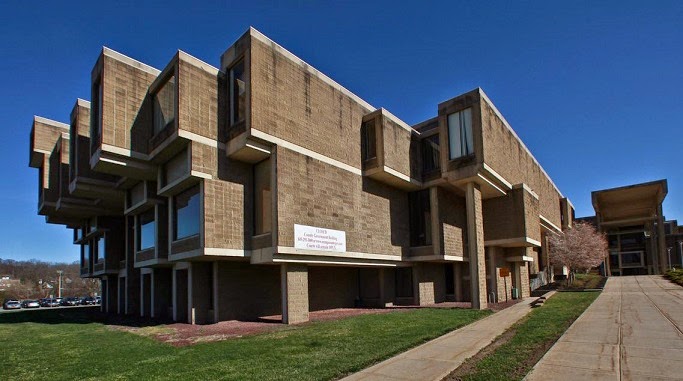 I am also puzzled by the way brutalist architecture went together with socialist idealism:


the government center was conceived with lofty social aspirations, making tangible Rudolph’s concept of energetic governance as a democratic ideal. It was a beautiful notion; and while the architecture may never win any popularity contest, it was beautiful, too, with its poetry of asymmetric, interweaving volumes.

Was the connection between awful modernist architecture and socialism just an accident of timing, or does the socialist fondness for soul-destroying buildings reveal something disturbing about the whole communal project of the modern left?
Posted by John at 8:33 AM

"Soul destroying" is an entirely subjective quality of a building. Your mileage for a given aesthetic will vary from the next guy's.

It is true that my dislike of modernism is simply taste. I rarely bother to attack modernist painting or sculpture or music because that isn't forced on anybody; if you don't like it you are perfectly free to enjoy old things. Which is what I do.

Architecture is different, especially architecture paid for by governments. It belongs to the public and, it seems to me, it ought to acknowledge the public's taste. And the public, by and large, dislikes modernism; this is why you can get a public outcry about tearing down lovely neogothic or neoclassical buildings that you don't get for brutalism.

What puzzles me and sometimes angers me is that although in most arts these days we have a vast array of styles, public architecture is still almost all modernist or post-modernist. Hardly anybody is building the sort of buildings that I and people like me admire. Why not?

"What puzzles me and sometimes angers me is that although in most arts these days we have a vast array of styles, public architecture is still almost all modernist or post-modernist. Hardly anybody is building the sort of buildings that I and people like me admire. Why not?"

Cost, perhaps? Your Neogothic and Neoclassical stuff doesn't come prefabricated out of concrete, for starters.

Even putting aside sheer price, there's the question of valuation. I imagine many taxpayers feel that an "ugly" but cheap government building is a better use of "their" money than a "prettier" but more expensive one of equal utiliy.

Or maybe you simply overestimate the size of your own faction? Maybe the public does not, by and large, dislike modernism? And perhaps whatever outcry there is over the tearing down of Neogothic and Neoclassical structures has less to do with which particular style the buildings are in, and more to do with their age, history, and status within local communities? Brutalist buildings are very much more recent developments, and have had far less time to become engrained within their landscapes - is it any wonder there is less outcry when a less historically venerable building is replaced?

And what of the purpose of said buildings? Are we making a fair comparison between the kinds of buildings demolished? Surely one style of building must house a greater proportion of libraries, museums, centers of learning, and other high profile "attractive" institutions, while the other style has a larger number of "unglamorous" constributions to the everyday workings of society, like offices, convention centers, chambers of legislature, housing projects, and shopping centers?

There's also the question of architecture being "forced" on people. Surely if Brutalism is "forced" on some, the same must also be true of Neogothic and Neoclassical buildings on others? Are we to put every government building to a public vote to determine the architectural style?

And what about other, more pressing concerns about what is and is not "forced" on people? Surely intrusive paid advertising is far more eggregiously unpleasant to a larger proportion of the population? Billboards and signs, particularly on roadsides and highways where they serve as a distraction and potential danger - if we're going to start drawing lines in the sand on what can and cannot (or should or should not) be placed in public view, surely that is a more worthy subject of our collective scrutiny?

And surely we must also consider the cultural and historical baggage of the Neogothic and Neoclassical styles? The founders of those styles purposefully set out to emulate the architecture of Ancient Greece and Rome, as well as Late Medieval Europe - not just as an aesthetic choice, but as an ideological one.

Say what you will about the architecture embodying Classical era values of "Republic" and "Democracy" and the "beauty" of the Gorthic period - such architecture also positively screams things like "White Hegemony", "Patriarchy", "Empire", "Christianity", "Feudalism", "Aristocracy", et cetera. Is it proper for "architecture paid for by governments" to show such a blatant cultural bias? Brutalism might be stark and simple, but at least it's relatively neutral in ideology.

There is one way to measure the architectural tastes of the mass public, and that is to look at the houses they build for themselves. Of course houses are different from public buildings but any the custom home business is entirely about building neogothic and neocolonial houses. Only weird millionaires opt for modernism.

"There is one way to measure the architectural tastes of the mass public, and that is to look at the houses they build for themselves. Of course houses are different from public buildings but..."

A large percentage of Americans are not homeowners, and a huge proportion of the percentage that are had no say in the architectural designs of their homes.

So perhaps "only weird millionaires opt for modernism", but considering the majority of people who "build for themselves" are rich white people, I'd not be at all surprised by Neoclassical and Neogothic styles dominating. It's practically a tautology, really.

But then, as even you admit, this all has absolutely nothing to do with government buildings. Even if we completely discount the dominant architectural styles of houses and the demographics they appeal to, privately owned homes simply do not compare to civic construction. The two are built with entirely different purposes and expectations.

If you're building your own private residence with your own wealth, aesthetics are likely a primary concern. But if you're constructing a public building on the taxpayer's dime, aesthetics are at best a secondary or tertiary concern, well after basic utility and affordable prices. Brutalism can offer at least some stylistic embellishments and decorative forms, but the reliance on concrete and the emphasis on simple forms both keeps costs down and better suits the practical needs of a given project.

Why is aesthetics a secondary concern in a public building? The Romans didn't think so, or the Victorians, and we have a lot more money than they did. Look at Versailles, or the Forbidden City.

I think the proliferation of ugly government buildings is part of why Americans have a visceral dislike for government. I think our physical surroundings matter a lot. And I think that that all those ugly concrete facades and grim lobbies and grimmer offices offer the public a grim picture of their government.

We could make all our government buildings nicer for the cost of a few dozen fighter planes, and I think we should.

Sure, I think we can all agree that "prettier" government buildings are worth the money.

The problem is that people certainly can't agree on style. What you find attractive others might not care for, and what you simply can't stand others might be rather fond of.

I have to once again ask - are we to put every government building to a public vote to determine the architectural style? Because if we're to elevate aesthetic to the level of concern you propose, that's essentially the only fair way to serve the diverse interests of the entire population.

Remember, you invoke the Roman Empire, the Ming Dynasty, and the House of Bourbon - but these were peoples of antiquity who chose to forcibly impose their cultures and values on their subjects. They simply built in the styles that appealed to their wealthy imperial patrician elites.

Moreover, Versailles and the Forbidden City were both devised for entirely political purposes - a means of manipulating and controlling the nobles of their respective courts to stifle dissent and centralize power. Naturally these sites were built in the styles which were en vogue at court at the time - which was yet another way to ensure conformity and exert influence. Those who wished to remain in favor were obliged to not only applaud whatever style was currently ascendant, but to adopt it themselves and actively promote it.

If you can think of a good way to democraticize the choice of architectural style, by all means we can concern ourselves more with architecture. But until then, the people making the decisions are going to continue to do so based chiefly on cost, because that's what gets them re-elected.

Of course, this all assumes we're putting aside the complicated logistics of actually getting more government money allocated for making "prettier" government buildings.

Think about it. Who exactly is going to vote on this? Which senators are seriously going to petition for the military of all people to receive less funding so that local government buildings can be gussied up? Even if it's "just" a few dozen fighter planes - and that's actually a pretty substantial number, given most active service aircraft models don't break double digits in total numbers - who in the world is going to be motivated to vote this way?

No politician in the country has a constituency that cares enough about this topic to justify trying to lobby against the interests and wishes of the Pentagon and the military industrial complex. Re-election simply doesn't hinge on the public beautification agendas of various segments of the general public. It hinges on making sure the major players with influence and money are happy with their cuts of pork, and willing to keep contributing to your campaign fund.