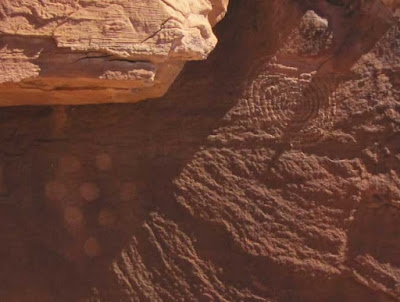 Horseshoe Mesa in Arizona contains an impressive array of ancient Indian petroglyphs. It has recently been confirmed that one rock face there is carved in a way that marks the equinox; at noon the "shadow dagger" at upper right cuts through a spiral design.

This not a very big rock face, and very few people can see this phenomenon at one time. But this is not unusual among American Indians. Many North American petroglyphs were carved by lone men or women, sometimes as part of vision quests or other personal acts. I wonder if this particular equinox sign was the personal creation of one person, perhaps a shaman, for use in a personal ritual tied to his or her own visions.
Posted by John at 7:44 AM

If you are out in the open most of your life, just gardening, walking at night, up with a puppy, etc. you realize how the sun and stars move. Currently, I mark the yearly movements of the sun by its light moving across my kitchen cabinets. Surely all previous humans did the same in their environs.