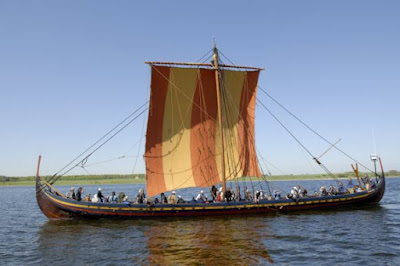 In 1989, workers repairing the roof of a medieval church in Trondenes in northern Norway found pieces of 600-year-old woolen sailcloth stuffed into the attic. While it dates from about three centuries after the height of the Vikings’ dominance, it belongs to the same sailing tradition. Chemists, historians, textile experts, and archaeologists have pored over the chunk of fabric. They learned it was a variation of wadmal, the basic woolen cloth woven for everyday use throughout the North Atlantic region, from Viking days right through the Middle Ages. The wool itself came from northern European short-tailed sheep—the kind the Vikings kept. Jørgensen says their unusual coat was a key element in making woolen sails.

The sheep are double-coated, with an outer coat of long, strong guard hairs and a soft, warm inner coat. Both kinds of fiber showed up in the old sail. To create a strong fabric, the weaver used the coarse outer hairs in the sail’s warp (vertical fibers on a traditional warp-weighted loom). The weft (horizontal fibers) came from the soft inner coat that fluffs out a bit, filling the gaps in the weave. The finished material was “fulled”—that is, treated to shrink it slightly and tighten the fabric.

But that wasn’t the whole secret of a windproof woolen sail. Analysis showed that the sail fragment was soaked with resinous material. After centuries crammed between the joists of the old church, it was almost as stiff as the boards that protected it. That goopy stuff proved to be crucial to making a functional woolen sail.

Eamer sought out Amy Lightfoot, who lives on a remote Norwegian island and has made several woolen sails based on the Trondenes cloth. Eamer couldn't get to Lightfoot or reach her by phone, but Lightfoot did send a letter describing her work:


An important step, she wrote, was recreating the resinous goo found in the old sail. She smeared her sails with a combination of fir tar, fish oil, and sheep tallow—all easily available 600 years ago. It worked. Her sails repel water and have substantial wind resistance.

But they need a mind-boggling quantity of wool. Based on her first sail, Lightfoot estimated that a 100-square-meter sail (about one-quarter the size of a basketball court and big enough for a 30-meter longship) used two tonnes of fleece, the annual production of about 700 sheep. Researchers at the Viking Ship Museum in Roskilde, Denmark, calculated that by the mid-11th century, the Viking fleet—fishing boats, coastal traders, cargo ships, and longships—carried roughly one million square meters of sail, requiring the equivalent of all the wool produced in one year by about two million sheep.

Twisting rope is another very time-consuming task just as essential for a finished ship as the hull.
Posted by John at 7:15 AM