The Mummies of Xiaohe 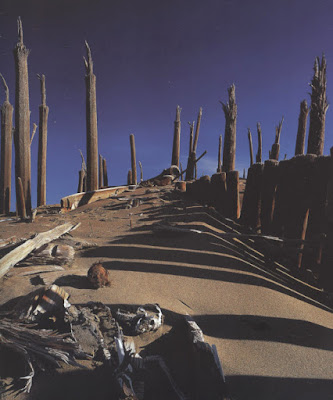 In 1910, a Uighur hunter named Ördek was wandering through a patch of inhospitable wasteland in China's Taklamakan Desert when he stumbled across a forest of wooden poles. Around the poles he found human bones and ancient religious artifacts. Realizing that this was a haunted, forbidden place, he hurried away and never went near the spot again. 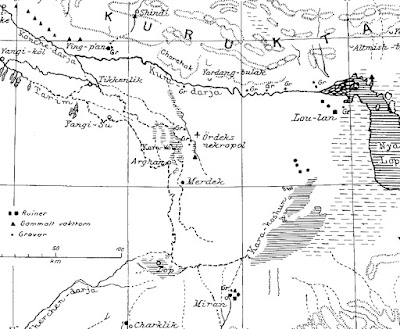 Many years later, in 1934, Swedish explorer and archaeologist Folke Bergman was poking around the region looking for ancient ruins related to the fabled Silk Road. Someone directed him to Ördek, who told him how to find the strange forest of bones but refused to go with him. Bergman managed to find the site anyway and named it Ördek’s Necropolis. It was in essence an oval mound covered with wooden posts. Bergman spent a few days at the site and excavated 12 burials, which he took back to Stockholm. The burials had been dried out by the desert conditions and were remarkably well-preserved. In some ways Bergman found the burials oddly familiar: the boat-shaped wooden coffins and little string-fringed undergarments looked like those from Bronze Age Denmark. But as a rigorous scientist he dismissed those things as coincidences. (Bergman's map is above, the necropolis near the center.) 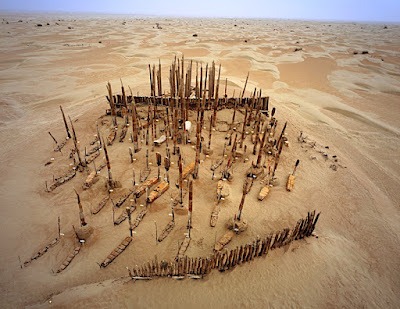 The site was then lost again, fading back into the immensity of the desert waste. 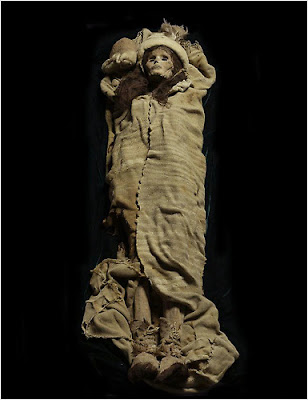 In 2002, Chinese archaeologists put Bergman's very accurate measurement of the site's location into their GPS units and drove across the desert to see what might still be left. They found the site exactly as Bergman had described it and in 2003 they began excavations. Since then they have found 167 burials in multiple layers, along with evidence that 190 more had been looted and destroyed. They renamed the site Xiaohe after a dry river nearby. 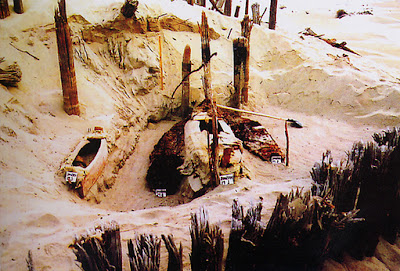 Description of the tombs:


Each tomb is marked by a vertical poplar post near the upper end of the coffin. A skull or horn of an ox may be suspended from the post. The ends of the posts can be either torpedo-shaped or oar-shaped, representing the phallus and vulva respectively. The male burials were marked with the oar-shaped posts, while the female burials were marked with the phallic posts. Bows and arrows were found with the male burials. The posts and coffins may be painted red. Each coffin is made of two massive pieces of plank assembled over the body, resembling an overturned boat, and then covered with cowhides. A few special tombs containing females have an extra rectangular coffin on top covered with layers of mud. Small masks of human faces and wooden human figures may accompany the burials. Twigs and branches of ephedra were placed beside the body. 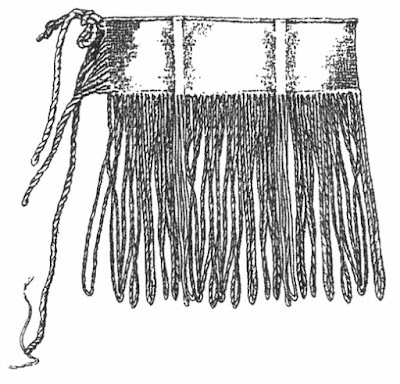 The bodies inside the boats were still wearing the clothes they had been buried in. They had felt caps with feathers tucked in the brim, uncannily resembling Tyrolean mountain hats. They wore large woolen capes with tassels and leather boots. A Bronze Age salesclerk from Victoria’s Secret seems to have supplied the clothes beneath — barely adequate woolen loin cloths for the men, and skirts made of string strands for the women.

Drawing of one of string under-skirts. 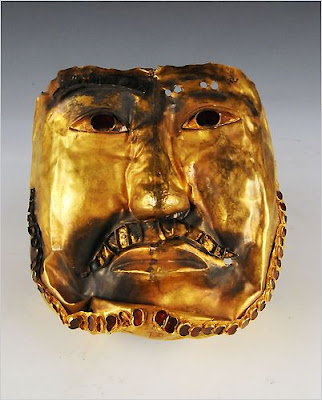 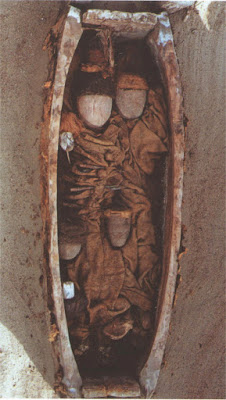 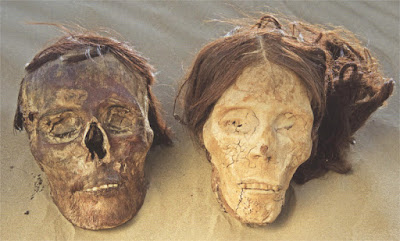 One reason the discovery attracted so much attention was that the mummies looked western, with round eyes and long noses. DNA analysis confirms this. The mtDNA – that is, the female lines – is mixed, including some types only found in western Asia and others common in East Asia. The Y chromosomes (the males lines) are all western, mostly R1a1. These were probably speakers of an Indo-European language, perhaps related to the Tocharian that was spoken in this same region around 500 to 900 CE. 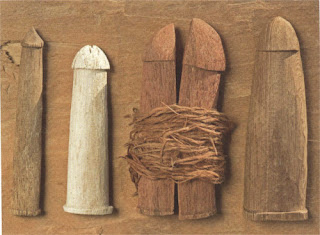 One of the striking things about the tombs is the richness of the sexual imagery. Most of the women were buried with at least one wooden phallus. This has led to speculation that this society was short of children because of low fertility or high infant mortality. 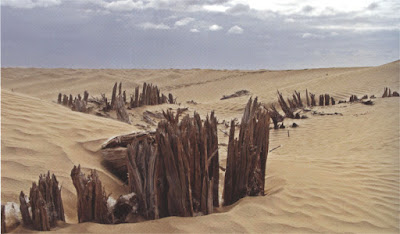 I wonder, though, if the point wasn't to promote fertility in a broader sense. This area was wetter in the Bronze Age than it is now, but it was always a desert where human survival was precarious. Pollen and other climate records suggest that while the region was comparatively wet in the 3rd millennium BCE, after about 1800 BCE it entered a thousand-year-long dry spell that led to the disappearance of this entire civilization by 1500 BCE. So was the obsession with sex connected in a mysterious way to the drying of the oases and seasonal rivers that provided these people's lifeblood? 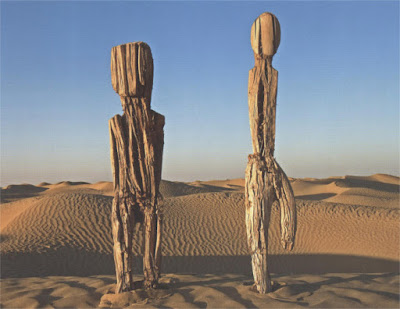 I always find these desert ruins a little sad; what was it like to live in a drying world, each year bringing less water and less life than the one before? 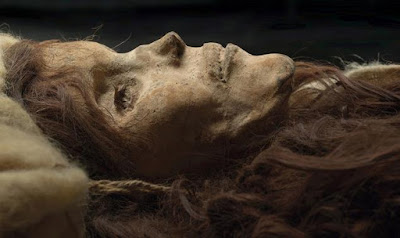 Then again perhaps the string skirts and all the rest of it tell us that they made the best of it while they could.
Posted by John at 11:32 AM