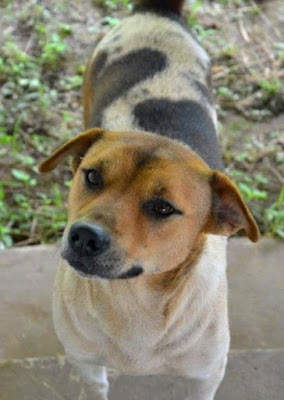 All over the world, wherever there is garbage, human settlements are haunted by untamed dogs. There are millions of such dogs; the estimate cited in this Times story is 750 million, but I would take that with a grain of salt. Most of these dogs are not recent escapees, but feral animals that have bred themselves back into a sort of generic dogginess:


They argue in their new book that these dogs “are not mongrels or strays,” as is often assumed. Some lost pets do wander into groups of village dogs. But by and large, these dogs are much the same around the world, whether in Africa, Mongolia, China or the Americas.

Dr. Coppinger said he was once told by a Navajo sheep herder that a good herding dog was “not too big and not too small,” which perfectly describes village dogs, too. They are larger in colder climates, but in the tropics, he said, a 30-pound, lion-colored dog is the norm.

During their time as human companions, these dogs acquired a key trait that allows them to survive as scavengers: they can eat our food. So they can live where wolves cannot, in fact wherever there is garbage to feast on. Their scavenging lives contribute to other behavioral differences from wolves:


They are completely polygamous. “There can be as many fathers to a litter of puppies as there are puppies to a litter,” Dr. Coppinger said. And after about 10 weeks, the puppies fend for themselves. Most of the pups don’t survive, as is the case with many wild animals. . . .

They don’t need to be big and strong to bring down prey. They don’t need the kind of parental care and hunting instruction that wolf pups get. As Dr. Lord said, dog pups don’t need to catch and kill anything. “They need to walk up to a rotten melon and eat it, which they can do at 10 weeks.”

Puppies, after they are weaned, cannot compete with adults, so unless disease or dogcatchers have put a dent in the adult population, most of them starve. They have a true superpower in reserve, however, that can help them escape their fate. They can convince a human to feed them.

Fascinating.
Posted by John at 7:00 AM