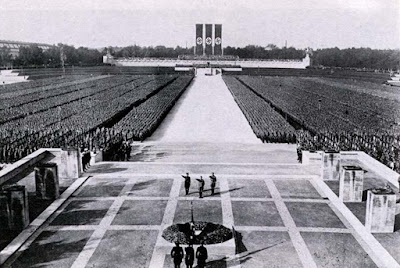 Germany is facing a troublesome question about historic preservation: what to do with decaying remnants of the Nazi Reich? This came up most recently over the Nazi Rally Grounds in Nuremberg, the site of Hitler's great party extravaganzas. 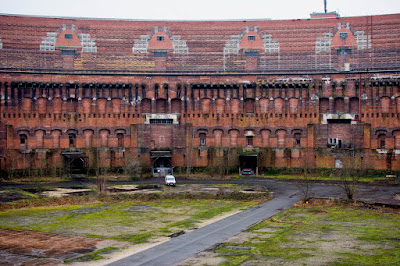 The buildings on the site are in bad shape, and state officials recently said they will have to be closed if they are not restored.

I think this would be a terrible idea. As I already said about Auschwitz, restoration is not a simple, neutral, technical process:


Every restoration brings with it questions of authenticity. Nothing can be made precisely as it was, and the whole enterprise is always fraught with questions of "Disneyfication" and the like. Every restoration is guided by a vision of the experience that the restorers want the visitor to have. As long as the camps just were as they were, nobody could really be accused of exploiting their memory. But once restoration begins, this question becomes inescapable. The camps will not just be leftovers from the Holocaust, but a museum shaped around somebody's idea of what death camps were like.

I think the same questions apply to any plan to restore the Nazi Party grounds. In the case of the death camps I can see why some people think their preservation is imperative not matter what the cost, but I do not see why we have to preserve Nazi kitsch. Let it crumble to dust.
Posted by John at 8:37 PM

What is the cutoff point for deciding to preserve someone's monuments? How despicable must your faction's actions be for the history you create to deserve to be destroyed?

It's easy to say we should just get rid of the buildings erected by the Nazis because they were the works of wicked people, but can it be denied that countless other famous historical sites are also the works of similarly wicked peopl, even if on lesser scales of depravity? From the palaces of tyrannical kings and tsars; to triumphal arches and war monuments glorifying ancient attrocities; to the tombs of simply awful, terrible people; who gets to decide which is worthy of keeping for future generations?

In the wake of the second World War, should the Allies not have taken the time to rebuild the heavily damaged Tempio Malatestiano simply because it was commissioned by Sigismondo Malatesta, The Wolf of Rimini, a brutal and depraved mercenary warlord whose personal misdeeds were reportedly so numerous and vile that he became the first and only person ever to be canonized into hell by the Vatican? Ought we not tear down the Arc de Triomphe for being commissioned by, and celebratory of, Napoleon Bonaparte, the man whose violent regime laid the groundwork for Hitler's own attempt at European conquest? If we were to destroy every archeological site with substantial connections to rape, pillage, slavery, genocide, and general atrocity of some form or another, there'd be precious little else remaining to preserve.

Human history is often actually quite ugly and offensive, and yet even still much of it deserves to be preserved for the sake of those yet to be born as a legacy of understanding and a record of our mistakes and misdeed. The Nuremburg Rally Grounds are in many ways a relic unique to their specific time, place and circumstance - just as much as the literally blood soaked floors of the Colosseum, or the burial grounds of the rapacious Vikings of old. Surely it is no less important a piece of history simply than other comparable spaces used for similarly questionable purposes?

And why is simply preventing further deteriorization not more highly considered? Why not shore up the site structurally, leaving as much as possible untouched, and preserve it as is in a "decayed" but stabilized state? Why must the issue be framed only as "reconstruction or nothing"?