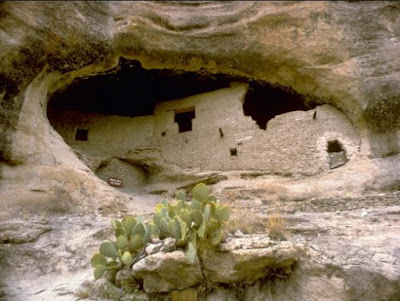 The American Southwest may be the most intensely studied archaeological zone in the world. Because so much work has been done at such a high level, in a desert zone where there is often good preservation of bone and wood, and there are descendant communities (Hopi, Zuni, Pueblo) who preserve many ancient traditions, marvelous things can sometimes be done with the data. 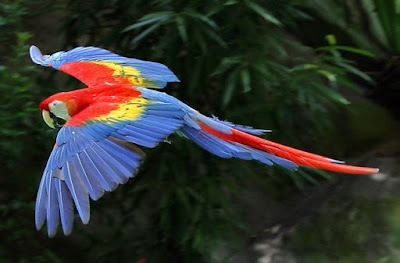 Consider one fascinating sidelight, the importance of parrots and especially the scarlet macaw in southwestern myth, ritual and art.

Scarlet macaws are native to the central American jungle, and their food is tropical fruit that can't be found in the desert. Yet thousands of parrot skeletons have been found on southwestern archaeological sites, most of them probably scarlet macaws. Their feathers are still treasured for key rituals associated with the sun, as they certainly were in ancient times. The Hopi and Zuni both have Macaw Clans. 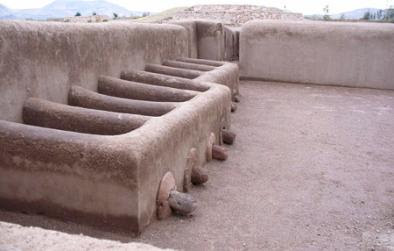 These strange structures from the site of Paquime or Casas Grande in northern Mexico were dubbed "macaw pens" by their excavator and some archaeologists still think that is what they are. 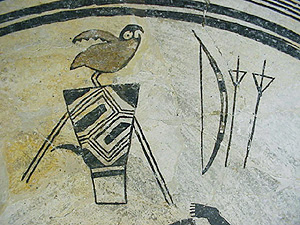 Just the other day I dug out a 2014 issue of American Antiquity for a different purpose but found myself distracted by an article on scarlet macaws in the Mimbres region. The Mimbres is a river in southwestern New Mexico. In its valley, around 1100 CE, arose a culture called the Classic Mimbres  most notable for its amazing pottery. Mimbres pottery is not abstract like most other southwestern wares, but figural, and among the figures depicted on Mimbres pots are macaws. 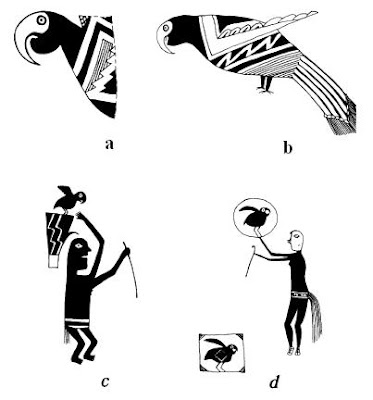 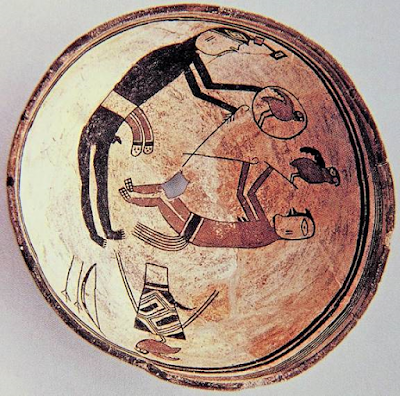 Where did all these macaws come from? Because their food was not available in the desert, it would have been very difficult to keep them alive and healthy. Finds of macaw egg shells, especially around the macaw pens at Paquime, show that some macaws laid eggs in these desert towns. But they cannot have reproduced themselves very well and the population would have needed constant replenishment with new birds from the jungle. Besides, most of the bird skeletons seem to represent young adults who had been sacrificed when they had just reached maturity, quite likely at the spring equinox. 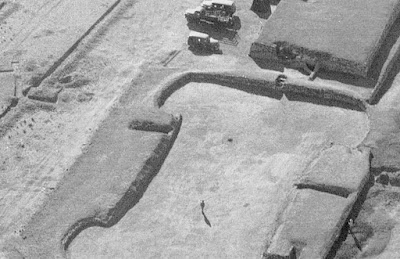 The macaws were not the only connection between the southwest and the Maya. I wrote here back in 2011 about the trade of southwestern turquoise for Maya chocolate. Besides the macaw pens, Paquime also has two central American-style ball courts (above). 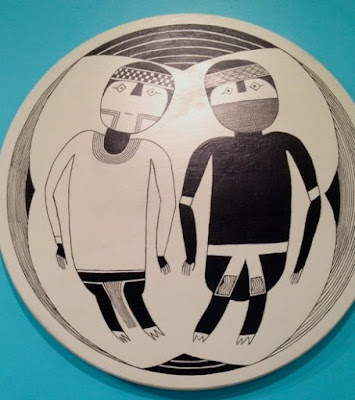 Much Mimbres pottery depicts what appear to be scenes from myth, in particular the myth of the Hero Twins. Heroic twins are known in many parts of the world, but the Hero Twins of the southwest have too much in common with those of the Maya to represent 10,000-year-old memories. Somebody, it seems, carried stories about the twins back and forth between the Maya jungles and the southwestern deserts. Macaws and their feathers, incidentally, feature prominently in many Maya tales of the Hero Twins.

So how did the southwestern macaw thing get started? Most likely, around the year 1100 some pilgrim from Mimbres walked to the Maya heartland to be initiated into their esoteric lore. He or she then walked back to Mimbres, bringing along new stories of the hero twins, new knowledge, and a scarlet macaw in a cage. Other pilgrims followed, perhaps dozens, perhaps hundreds. In Mimbres, the people abandoned the underground shrines known as Great Kivas where they had worshiped and moved their rituals to new outdoor plazas. (To archaeologists, a change in the buildings used for worship is the most dramatic evidence of religious or ideological change.) Macaw feathers became the symbols of initiates into a new cult of the hero twins and their avatars, the sun and the moon. Those pioneering pilgrims were remembered, and in a garbled way their stories still survive – several Indian tribes and clans have tales of people who traveled far to the south, to the land of the sun, and returned with new rituals and lore.

The bird bones, the pottery, the lore – it all fits together in an amazing way.