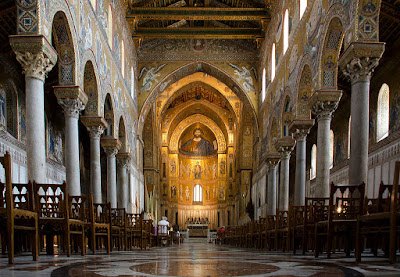 The Cathedral of Monreale is is one of the great legacies of Norman Sicily. It was begun in 1174 by William II, in response to one of those jurisdictional disputes that loom so large in medieval history:


The cathedral was built by William II after the English archbishop of Palermo sought, with the solid backing of the Pope, to assert his authority over the king by refusing to honor his father's wishes to be buried at Cefalù, instead interring him at Palermo Cathedral. William II immediately set about building a bigger and more artistically inspired cathedral, appointing his own archbishop, and making his cathedral the royal pantheon. 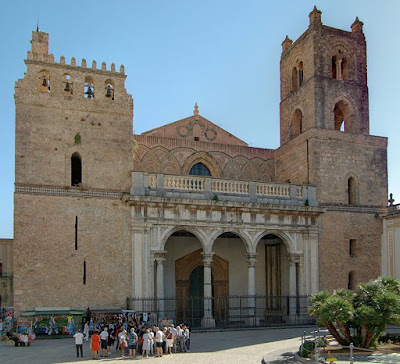 This temple to God and the Norman kings was consecrated in 1182, just eight years after construction began, and it was essentially complete by the time of William's death in 1189. The overall form, as you can see, is nothing special, and the portico is a Baroque addition. 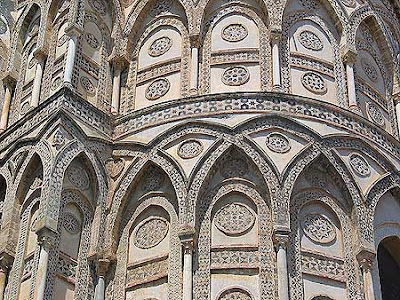 But the apse has some lovely decoration. 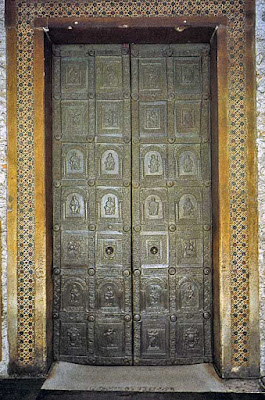 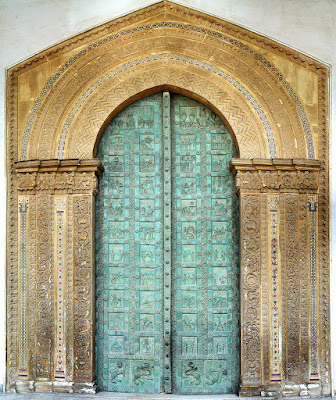 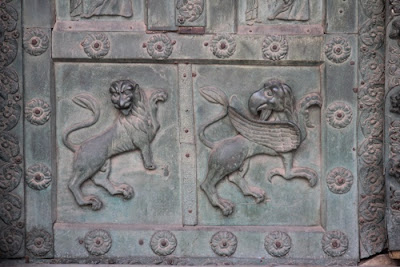 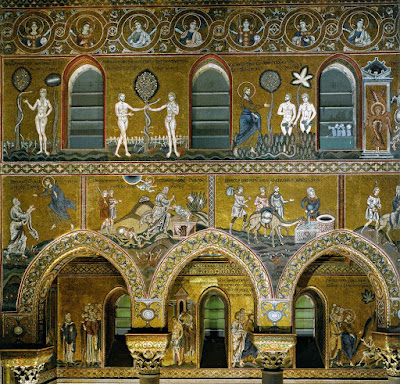 And the interior is a spectacular wonder. Craftsmen – some local, some imported from Constantinople – covered the walls with golden mosaics. The total area of the mosaics is about 7,000 square meters (exact counts vary), which is 75,000 square feet or 1.75 acres. 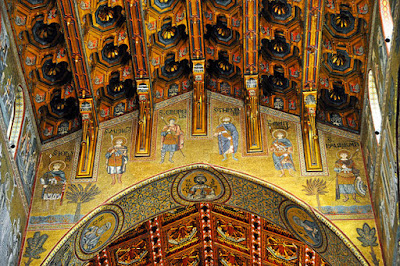 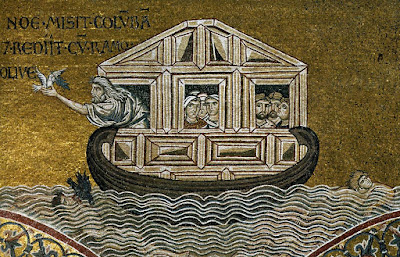 The two sides show stories from the Old and New Testaments. 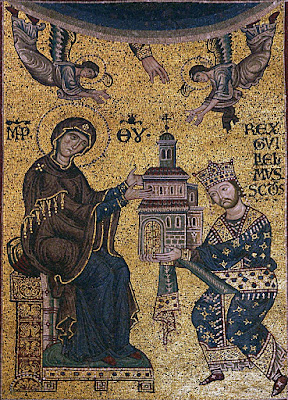 William II offers the church to the Virgin. 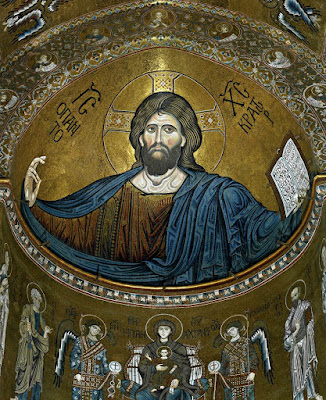 More pictures of the mosaics here. 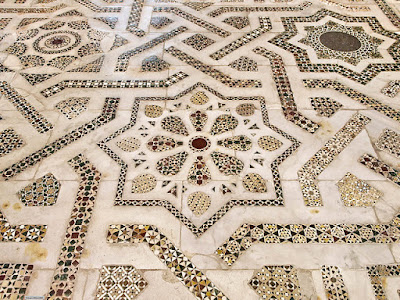 The cathedral also has a wonderful Cosmati pavement floor. 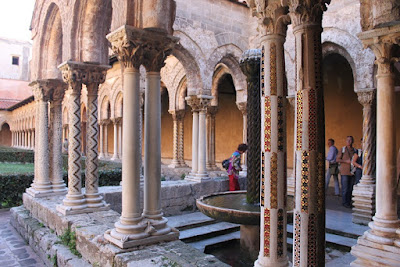 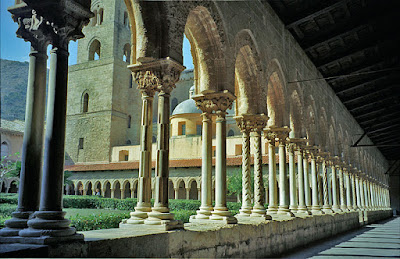 But to me the greatest glory of the cathedral is the cloister, all that remains of the attached Benedictine monastery. 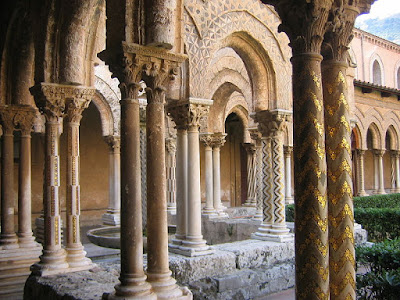 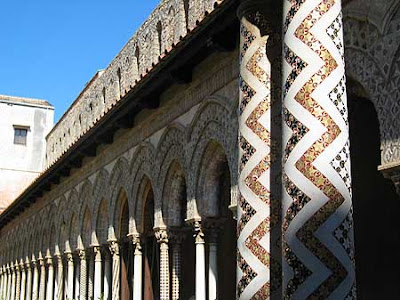 There are 216 pairs of columns; alternately decorated and plain; of the decorated, no two are alike. 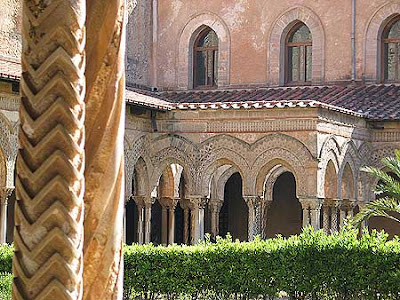 This image brings out the Moorish influence that was a major part of the unique Sicilian architectural style. 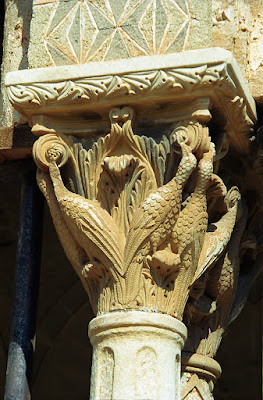 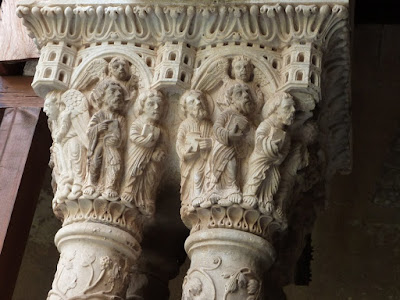 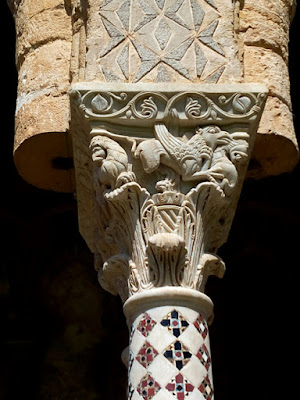 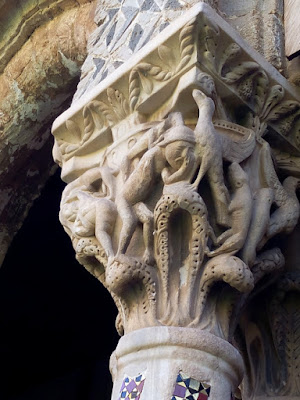 The capitals are a riot of sculptural invention. 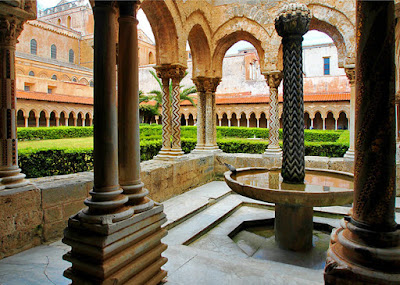 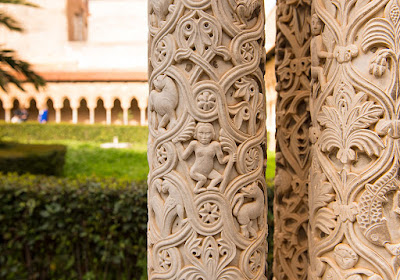 There is a saying, Who visits Sicily without seeing Monreale arrives a donkey and leaves a beast.
Posted by John at 10:39 AM