The Climate Change Hiatus and the Weird Presentism of Political Debate 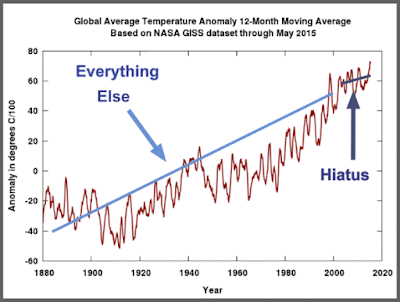 Lots of chatter this week in climate science circles because of a new note published in Nature Climate Change arguing that the "hiatus" in global warming over the past 15 years is real. They call it the "warming slowdown." After applying gobs of statistics to the global temperature data, they conclude that the rate of temperature increase has in fact slowed since 2000. 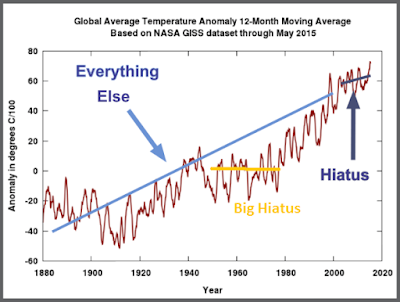 But if you're like me, you looks at the above graph and ask, what about this hiatus? I mean, given the vast number of pixels that have been spewed over the internet about the recent "hiatus", you might think it is some kind of unusual event. But it is not, and in fact it is a lot less important than the big pause we had from 1945 to 1980. The authors of this paper in Nature recognize that, and they offer an explanation that they think explains both slowdowns: that these are phases when the oceans were warming, and therefore soaking up heat, and in between came a phase when the oceans were cooling and therefore accelerating the change. (You have to remember that most, as in almost all, of the heat in the climate system is actually in the oceans, not the atmosphere.)

The climate change debate is a good example of a big problem with human thinking in general, a problem that makes it very difficult for us to deal with problems like global warming. Our thinking is far too short term. Both people terrified of climate change and people who dismiss the whole thing as a hoax spend way too much time and effort arguing over whether the world was warmer in 2010 than in 2000, when the only serious answer is, who cares? What matters is the trend since 1850 when we really began pumping CO2 from fossil fuels into the atmosphere, and that trend is up.

And the question that matters, and that we cannot answer, is why the global temperature, which seems to track the level of carbon dioxide in the atmosphere, has gotten decoupled from it in recent decades. As you can see in the graph above, the CO2 level has soared in recent decades while the plant has warmed only a little. Is that because some other mechanism cancels out the effect of all that greenhouse gas? Or is it because the change is just taking some time to work its way through the system? Most scientists are betting on the latter, and if they are right we are in for terrible trouble.

And one thing we know about the climate is that it does not generally warm or cool in smooth curves, but like a flight of stairs, with periods of rapid change separated by periods of stasis. So even if we are in a pause, that in no way implies that we won't start warming rapidly in a year or two.
Posted by John at 7:21 AM