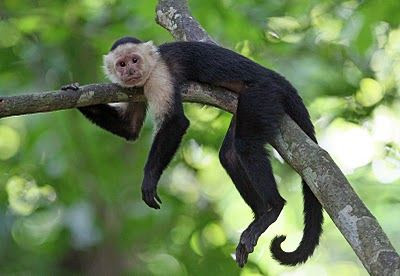 Capuchin monkeys, it seems, do not take it kindly when one monkey has more than the others:


Punishment of non-cooperators is important for the maintenance of large-scale cooperation in humans, but relatively little is known about the relationship between punishment and cooperation across phylogeny. The current study examined second-party punishment behavior in a nonhuman primate species known for its cooperative tendencies—the brown capuchin monkey (Cebus apella). We found that capuchins consistently punished a conspecific partner who gained possession of a food resource, regardless of whether the unequal distribution of this resource was intentional on the part of the partner. A non-social comparison confirmed that punishment behavior was not due to frustration, nor did punishment stem from increased emotional arousal. Instead, punishment behavior in capuchins appears to be decidedly social in nature, as monkeys only pursued punitive actions when such actions directly decreased the welfare of a recently endowed conspecific. This pattern of results is consistent with two features central to human cooperation: spite and inequity aversion, suggesting that the evolutionary origins of some human-like punitive tendencies may extend even deeper than previously thought.

So the monkeys go after any other monkey who stumbles onto a food windfall until the extra food is shared. And they don't do this because they are hungry or angry, but just because that is what capuchin monkeys do.

Certain human hunter-gatherers do the same thing; a hunter among these people who doesn't want to share his catch evenly with everyone has to eat it before he comes back to camp.

I think about this whenever I ponder human inequality. If we really want a more equal world, we have to stop rewarding people who get rich with adulation and attention and start snubbing them until they share more.
Posted by John at 1:23 PM