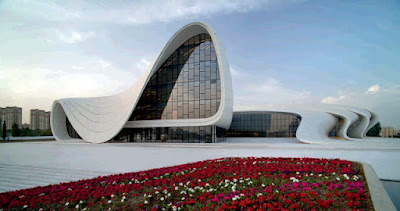 I will mark the passing of celebrity architect Zaha Hadid by calling attention back to this post on her appalling service to the tyrannical rulers of Azerbaijan.
Posted by John at 10:38 PM

Typically unless I have a pretty good reason, I think it best not to speak ill of the dead. I don't believe such a reason is present here. Hadid built subjectively ugly buildings for awful people, but I hardly think that merits a figurative dance on her freshly dug grave.

You previously wrote: "Nothing says "I am everything and you are nothing" like bulldozing a whole neighborhood to put up a gigantic, futuristic monument to yourself." But isn't that exactly what the world does every four years for the Olympics? And how many of the various buildings you've previously sung the praises of have done much the same? Surely a great number of the mansions, state offices, and other large scale architectural projects you've lauded on this site were built on previously occupied grounds which had to be cleared to make room?

I could understand your sentiments if they were directed at the deaths of the monstrous autocrats of Azerbaijan, who have actually done real harm to people. But to malign a mere architect in the hour of their death simply because they were employed by awful people to construct a building? That seems terribly unworthy.

Should we decry Jean Chalgrin for creating the Arc de Trioumphe, a monument to the senseless strife and bloodshed of the French Revolution and Napoleon's attempted conquest of Europe? Should we denounce Gustave Eiffel for his titular tower, built for the Exposition Universelle, the centenial celebration of the same bloodsoaked revolution? Perhaps Louis Le Vau for creating the Palace of Versailles, both a symbol and an instrument of absolute monarchy under the oppressive Louis XIII? The builders of the Taj Mahal, for transforming 42 acres of land into an extravagant tomb for a single woman at the behest of their Shah, all at a staggering cost of both wealth and human life? What of railway engineers such as Isambard Kingdom Brunel and John Henry Patterson, whose thought nothing of sacrificing human lives to help speed along the conquests of the British Empire?

Surely it is foolish to condemn the arhitect for their business associations, rather than the actual guilty parties for their true crimes?

What set me off about this building was the way it was being praised in the architecture press without any reference to what it is for or why it was built. Google the building and you'll see what I mean; I read at least a dozen stories and posts about it without finding a single reference to who paid for it and why. As if it were a little sculpture in the corner of a room, not a great public building. As if it had been built to serve the nation, not the builder's ego.

I actually despise the way whole neighborhoods are leveled for new stadiums and the like; I work in historic preservation, remember. I hate what has been done to the historic hutong districts of Beijing for the Olympics and other "improvements". I understand that sometimes the old has to make way for the new, but when the new is a dictator's monument to his family, I think that is relevant to talking about the building. I think there is something wrong with looking at a building with such a purely evil purpose and saying, "Look at those cool organic forms!"

Which gets me to what I dislike about modernism and post-modernism as movements: architects in our age think about their creations too much as sculptural forms without considering what they are for and how they will be experienced by people who live or work in them. Frank Lloyd Wright's Guggenheim Museum is the epitome of this; he wanted to build a great spiral building and sketched out several other versions (one for a parking garage, I recall) before he was able to foist his vision on museum goers. Fortunately he died before it was finished, so that others were able to correct flaws that would have made it a completely impossible place to look at art instead of merely an awful one. I feel the same way about I.M. Pei's East Wing to the National Gallery in Washington; as a sculpture it is interesting, but it is a lousy place to look at art.

People who study urban life say that long blank facades are death to neighborhoods, but architects keep putting up buildings that show only blank concrete at street level --like Koolhaas's CCTV building, which all the critics think is a work of genius. Long, blank facades depress the people who walk by them -- or so certain studies have said, and I know it is true with me. Architects should be thinking more about these things and less about nobility of form.

None of this is Zaha Hadid's fault, but her architecture epitomizes this tendency to think of buildings as sculptures. Peruse the literature on her buildings; is even a single one ever praised because it is good for its purpose? Is the Maxxi in Rome a good place to look at art? Who knows? How is the sound in the Guangzhou Opera? None of the reviews I read of the building said anything about it.

I know architects don't always get to choose their clients, and that past architects did much of their work for the Rockefellers and Goulds and before that for dubious kings and bishops. But I think the ideology behind a building matters. (The pyramids have always creeped me out, and Versailles makes me shudder.)

Since my feelings about contemporary architecture spring equally from my political populism and my deepest artistic impulses, they are so strong as to sometimes overwhelm my manners. I try to write mainly about things I like, since there is far too much whining on the internet already, but sometimes the praise heaped on ghastly buildings angers me past caring. Mea culpa. But I think the whole world of contemporary architecture is deeply corrupt -- financially, sociologically, spiritually, and artistically -- and something really should be done to shake it up.

"I feel the same way about I.M. Pei's East Wing to the National Gallery in Washington; as a sculpture it is interesting, but it is a lousy place to look at art."

Oh, goodness, yes. Someone had the idea "Hey, wouldn't it be cool if people could view modern art inside a piece of modern art," without thinking what the practical consequence of that might mean. What a waste of space, and I get disoriented not always sure what floor I'm on. And those stairs!

You might be interested in this. Evolo runs a yearly competition for skyscrapers. Towers might be a better word. Only some are for general business and residences. Others have more specific functions. Look through the different years. This is 2016.