The Temple at Garni, Armenia 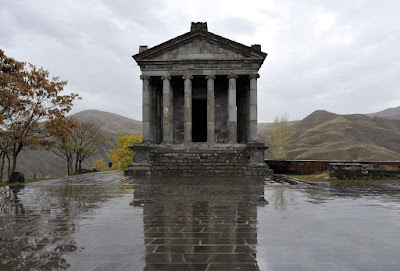 The wonderful little classical building was either a temple or a tomb, and it may have been built in 77, 115 or 175 CE, by either an independent Armenian king or one who had been appointed by the Romans. And that is the relatively certain knowledge about it. 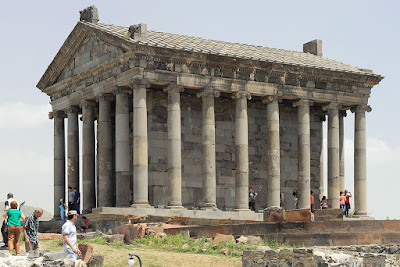 After the Armenians converted to Christianity in the 4th century, they destroyed almost all the pagan monuments in the country. For unknown reasons, this was spared; to my mind this is strong evidence that it was in fact a royal tomb. 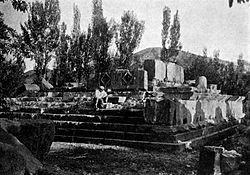 The tomb/temple stood until 1679 when it was destroyed in a truly terrible earthquake. This photograph of the ruins was published in 1918. 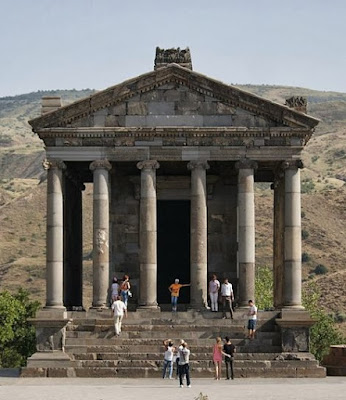 In the 1960s Armenian archaeologists and politicians got to thinking that since the building had been largely left alone since its collapse, and many of the pieces were still obviously lying around on the site, they could rebuild it. So they did. You can see that for missing pieces they used unmatching stone, so you can tell the difference. Narratives I have found online say it is "almost entirely" original, but staring at photographs I get the impression that a good quarter of the fabric is modern. Since the building was built in the most traditional form for a Greek temple, there was no difficulty sorting out which pieces were what. 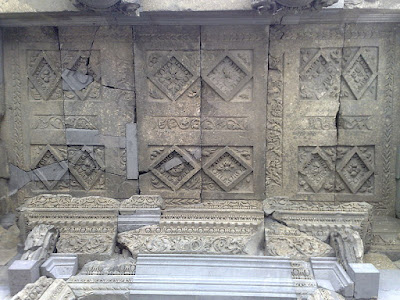 But anyway it is a very cool building. I tend to think that more ruined structures should be rebuilt, when there is sufficient knowledge to do so accurately.
Posted by John at 12:48 PM

The poster child for rebuilding is probably Saint Mark's Campanile in Venice, which after taking on its final form in 1513 stood essentially unchanged for almost 400 years as a world famous landmark.

Then in 1902 it suffered catastrophic structural failure and utterly collapsed. But they had the plans of the original, so the very same day they decided they would rebuild it exactly as it had been, plus some new internal reinforcement. And so they did, and so a great number of people today actually have no clue that the famous landmark isn't actually 500 years old.

I've heard people compare historical legacy to flame - that if something's history is interrupted or broken, it is as if a candle has been snuffed out, and even if relit, it's not the same fire.

But that analogy is inherently flawed - even an uninterrupted flame is not a single "fire", but rather an ongoing process of combustion in which fresh fuel is constantly converted into fresh flame, which then disperses into the atmosphere and is lost, continually being replaced by further new exhaust. The "fire" of a candle flame during one second of time is an entirely separate collection of matter and energy than that of the same flame during a separate second of time.

So too is historical legacy not a single "thing" to remain unbroken, but a series of discrete moments in time, each with their own meaning, value, and importance. Saint Mark's Campanile, prior to 1513, took on a variety of different forms and constructions, and was destroyed and rebuilt several times, stretching all the way back to the ninth century. Yet just because it hadn't yet taken on the modern day form which would eventually become so well known, doesn't mean that the earlier history is any less pertinent or important.

History is built on the bones of what came before, and nothing ever persists frozen in time, unchanging for all eternity. Our ancestors lived among and atop ruins, and so do we - we simply fail to realize it much of the time. The crime is not in simply reshaping the ruins of the past to serve the interests of the present, but in doing so without proper knowledge or reverence.