Clocks and Economic Growth in the Renaissance 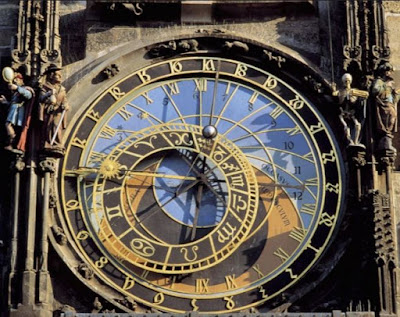 Various historians have asserted, without any real evidence, that the invention of the mechanical clock was a key event in jump-starting European economic growth. In this view the mere presence of public clocks chiming hours of identical length began to change how people thought about time and work, leading them to become more productive.

But is it true? Economists Lars Boerner and Battista Severgnini tried to test the theory. They did this by identifying a group of European cities that were "early adopters" of the new technology, that is, that installed their public clocks before 1450. They compared the economic growth of those cities to the late adopters. They found that over the 1500 to 1700 period the early adopting cities grew 30% more than the late adopters.

Of course there are at least a hundred ways this could be wrong, but at least they tried to measure the effect instead of just making airy assertions as so many historians have.
Posted by John at 2:07 PM

At some point in our history time stopped being something concrete and local -- i.e. measured by the sun, the moon, and the seasons -- even the bells of a monastery served as a clock (prayers). -- and became more abstract and universal. There is a wonderful story -- I don't have the book in front of me so can't give the title or author -- from 19th century Hartford Connecticut. For some time the town clock was the Yale tower clock. Then someone built a second one. The thing is the two clocks agreed on the time only some of the time. This caused much consternation and wonder. Then someone explained that the Yale clock was built to toll at noon, when the sun was at its zenith. In other words, it units of time measurement varied with the season. The new cock kept strict units of time measurement (or tried to) so it was only sometimes in agreement with the sun and the Yale clock.

Well, you would have thought someone dropped a bomb in town square. This caused a sensation, and the people of Hartford quickly divided into two camps, those who thought noon was when the sun was at its zenith and should ever be so, and those who thought it was time to shed tradition and get with a changing world. The argument was fought out in the newspaper for several weeks.

It sounds like an urban legend, but the book contains some of the letters to the editor in the newspaper.

Then the railroads connected across the country and suddenly we had timezones. Early factories and workshops as far back as the 18th century had clocks of one form another. The better to measure a complete workday and employee production. And there were fights about that too between employees and owners. So yeah, I can believe the mechanical clock (and our changing concept of time) had a lot to do with economic growth.

The history of timepieces and our ever changing concept of time makes for interesting reading.

Think about how you would handle your conceptions of time without a precise, easily accessible clockface of some sort to read.

You couldn't really say to someone "I'll be back in an hour and forty minutes", because you had no real conception of how long a minute actually was. At best you might say you'll be back "in a few hours", but there's a lot of variability in such a phrase.

Imagine someone was closing up shop soon, but you had something to do before you could conduct business with them, and you wanted to know how much longer they'd be open and if you'd have enough time to leave and come back. They might say "about an hour", and you might think to yourself that you can be done and back in "about an hour", but with such vague imprecision there's a very good chance that you'll miss them by a wide margin.

The only reliably shared temporal references would be things like "sunrise" and "sunset", in that you can see by the light of day how late it is. Except what about rainy and overcast days? And what about things like simple differences of perception in when, precisely, "sunset" occurs? One person might consider it to be when the sun first touches the horizon, while another person might claim that it's when the sun is no longer visible in the sky, and still another might insist that it's not actually sunset proper until the last light of day itself has vanished sometime after the sun alone is gone.

But clocks are regular devices, even when they're somewhat inaccurate and run considerably too fast or too slow. During the day, if there's a city clock and a belltower that chimes out the hour for all the hear, you need not pay strict attention to the weather and the movements of the sun to know essentially how much of your day is spent and how much remains - you need not even step outdoors in many cases.

There's also the notion of temporal transition points, such as when a day begins and ends. If you have a 30 day contract or deadline, does it expire at sunset of the final day, or sunrise of the final night? By using the granularity and regularity of mechanical timekeeping, you can more definitively set time limits that won't be arguable if they've been missed or met. Similarly, with mechanical time telling, you're also not at the mercy of the seasons - 8:00 is always 8:00, whether the sun is still in the sky during summer, or whether it is long since set in the winter, ensuring that no one is robbed of time they ought to have been allotted.

It's easy for us to question how much of a difference public timekeeping would have had on society in the fifteenth century, but that's because we're operating from a position of benefit that today seems utterly natural and that we now take for granted. Many of us have developed "internal clocks" that allow us to roughly tell whether we've spent half an hour or three hours on something without having to look at a clock or check the position of the sun, but such mental timekeeping is only really possible if you are able to form the proper conceptions and associations, and you very much need mechanical timekeeping to achieve that.

The value in the town clock, the one clock everyone in town could see, was found more in agreement than in accuracy. Such clocks were notoriously inaccurate. But if you announce you are having a town meeting at 3:00, then everyone can look at the town clock and be at the meeting at 3:00, It matters not a whit if the actual time is 2 or 4 o'clock. You can organize around it, and that has business and economic value.