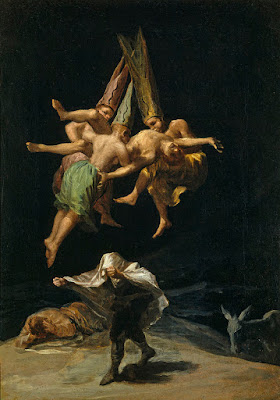 All painted in 1797-1798. I am reading Robert Hughes' Goya (2006) and enjoying it very much. I envy the person who had this library book before me, whose ticket to Madrid fell out of the book when I opened it – I wish I were on my way to Spain, to see paintings and so much else. This is Witches in the Air (Vuelo de brujos); notice that the witches wear the coroza, the peaked cap that the Inquisition forced on heretics, but Goya has made them look a bit like bishops' miters. 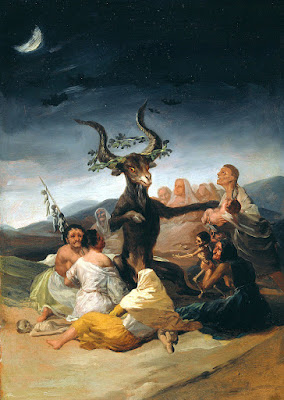 Hughes connects Goya's early witch paintings to the Gothick craze of the 1790s. English art, literature and thought were very popular among the more liberal members of the Spanish elite, so books like Ann Radcliffe's The Mysteries of Udolpho (1794) and Mathew Lewis' The Monk (1796) were well known to them. The Sabbath (El Aquelarre). 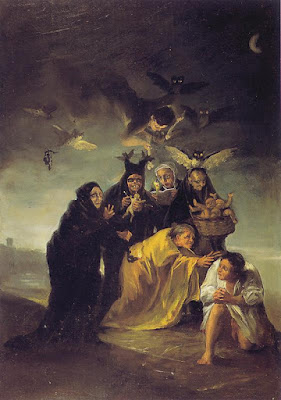 Goya also seems to have been very depressed at times during this decade, or perhaps troubled by recurring bouts of the 1792-93 sickness that left him deaf. Some critics see Goya's growing interest in the grotesque and diabolical as an effect of his poor health. The Spell (Escena de brujas). Since the victim is clad in his nightshirt, this is either a dream or a nocturnal visitation. More Goya here.
Posted by John at 7:46 AM