Turtles and the Afterlife 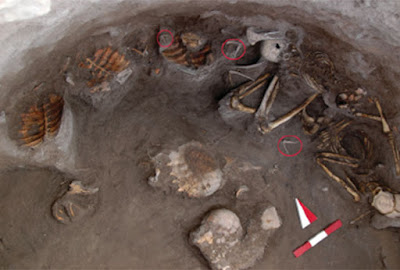 Archaeological news from the Euphrates Valley:


Excavations of a burial pit in southeastern Turkey revealed skeletons of a woman and a child, plus 21 turtles, a team lead archaeologist Rémi Berthon of France’s National Museum of Natural History reports in the February Antiquity.

The burial is part of an Assyrian site called Kavuşan Höyük that dates to between 700 and 300 B.C. The turtle bonanza included shells from one spur-thighed tortoise (Testudo graeca) and three Middle Eastern terrapins (Mauremys caspica), plus bones from 17 Euphrates soft-shelled turtles (Rafetus euphraticus). Butchering marks on the R. euphraticus bones indicate that the turtles may have been eaten in a funerary feast, Berthon and his colleagues write.

Back then, turtles were a regular menu item in many parts of Mesopotamia. Turtle bones also were thought to ward off evil. The abundance of R. euphraticus turtles, a notoriously aggressive species, in this burial pit suggests the deceased had high social status.

To ancient Assyrians, these ferocious reptiles probably represented eternal life and served as psychopomps — mythical guides to the afterlife, the team writes. 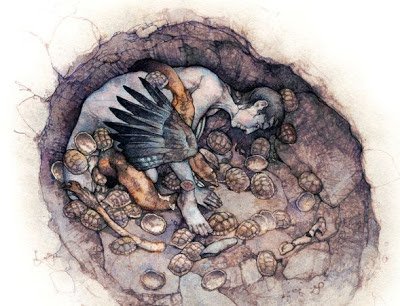 Reminds me of this old post, about another burial in the same part of the world, 10,000 years earlier:


Some 12,000 years ago in a small sunlit cave in northern Israel, mourners finished the last of the roasted tortoise meat and gathered up dozens of the blackened shells. Kneeling down beside an open grave in the cave floor, they paid their last respects to the elderly dead woman curled within, preparing her for a spiritual journey.

They tucked tortoise shells under her head and hips and arranged dozens of the shells on top and around her. Then they left her many rare and magical things—the wing of a golden eagle, the pelvis of a leopard, and the severed foot of a human being.

Why was that ancient Palestinian shamaness buried with turtles? Because turtles live on the shores of the waters, and the shore symbolizes the boundary between the earthly and spiritual realms. Some American Indians called Turtle "the gatekeeper." Like otters and other animals that go back and forth between the land and the shore, turtles can be seen as animal shamans. This makes turtle an appropriate food for funeral feasts in some cultures and in others a guide who will lead souls unerringly to paradise.
Posted by John at 7:51 PM