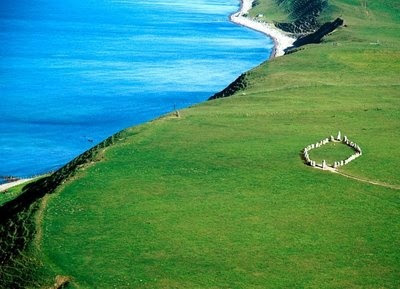 Ale's Stones are a ship-shaped arrangement of megalithic stones in Skåne in southern Sweden. They date to the Iron Age, around 600 CE. 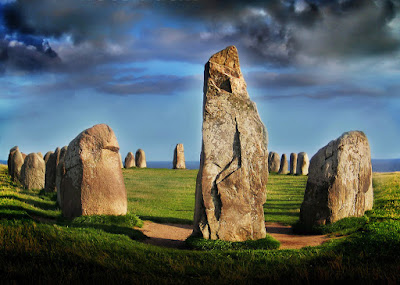 They are said to mark the resting place of the legendary King Ale. On the other hand ale may have meant "sanctuary" in Iron Age Norse, so the king may have been invented later to explain a monument called the Sanctuary Stones.

Today there are 59 stones, but some may have been lost, and others have certainly been moved or fallen and re-erected. The arrangement is 67 meters long, or 220 feet. 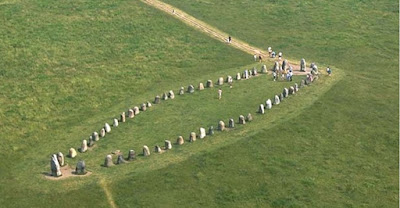 The date of 600 CE came from charcoal dug up at the site in the 1989. Five of the dates clustered around 1400 years ago. But a sixth sample returned a date of 5,500 years ago, or 3500 BCE. Nobody knew what to make of that early date until 2012, when archaeologists digging just a few yards from the stones uncovered a Neolithic tomb. Not much was left of the tomb because the stones that comprised it had been robbed; presumably they are now part of Ale's stones. But enough charcoal was found to date the tomb with some certainty to 3500 BCE. So this was a holy spot for a long, long time. 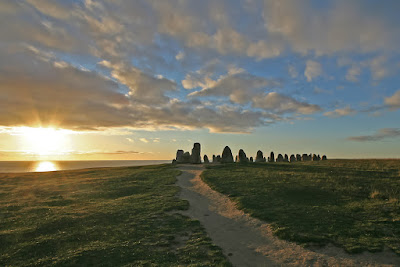 Most archaeologists think the later arrangement of stones is also a funerary monument, although no great tomb has been found. After all, Sweden is full of ship-shaped burials. Some evidence of cremation has been found, possibly from multiple events. The most widely accepted theory is that this monument was erected where some great king or queen had been cremated, and then perhaps used for later on for others of the same family or status. 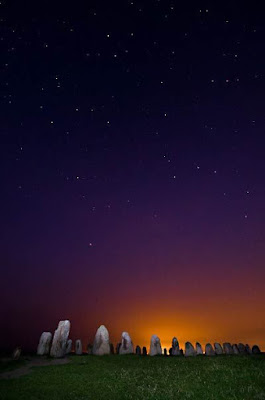 An amazing survival from the pre-Viking age.
Posted by John at 7:27 AM