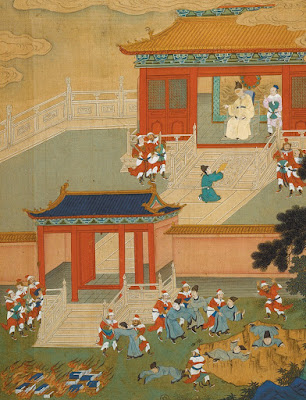 In 221 BCE, the famous emperor Qin Shi Huang unified China politically. He also set out to unify China ideologically, and from the various competing philosophical schools selected Legalism as the best system for his new empire. He ordered that all books from competing schools be burned and all scholars begin to teach Legalism. When Confucian, Daoist and other scholars resisted, he had them slaughtered; according to tradition he had 10,000 nonconforming scholars buried alive in a ravine. That's the emperor above in a much later painting, overseeing the burning and burying.

Once the burning and burying were over and the emperor safely dead, China's scholars set about trying to reconstruct what had been lost. Obviously nobody in 221 BCE could actually achieve the destruction of every Daoist or Confucian manuscript in China, so much remained. Confucian scholars in particular mounted a major effort to assemble surviving manuscripts into an agreed-upon set of master texts. Most modern scholars believe that the ancient Chinese classics as we have them, notably the Confucian Analects and Mencius and the Daoist Daodejing, were assembled in this period. But the question has long lingered: how much were they altered? Did they really resemble the originals, or had they been rewritten to suit the needs of a later age? Had they really existed before 221 BCE at all? Chinese scholars have taken just about every possible position on these questions. Most of their arguments have hinged on the details of paleography and word use, since there were simply no texts from before 221 BCE they could use as comparison. (The endless debate over when the Old Testament was written down and what earlier religious documents looked like is a good parallel.)

But now things have changed:


As Beijing prepared to host the 2008 Olympics, a small drama was unfolding in Hong Kong. Two years earlier, middlemen had come into possession of a batch of waterlogged manuscripts that had been unearthed by tomb robbers in south-central China. The documents had been smuggled to Hong Kong and were lying in a vault, waiting for a buyer.

Universities and museums around the Chinese world were interested but reluctant to buy. The documents were written on hundreds of strips of bamboo, about the size of chopsticks, that seemed to date from 2,500 years ago, a time of intense intellectual ferment that gave rise to China’s greatest schools of thought. But their authenticity was in doubt, as were the ethics of buying looted goods. Then, in July, an anonymous graduate of Tsinghua University stepped in, bought the soggy stack, and shipped it back to his alma mater in Beijing.

The Tsinghua manuscripts are the largest such collection, 2,000 slips, but there have been others, notably 800 strips from a tomb in central China and 1,200 looted strips that were eventually purchased by Shanghai University. These manuscripts include many philosophical treatises or collections of quotations from such treatises. All three major finds date to around 300 BCE, the era when both the terrible warfare of the Warring States Period and the bitter philosophical debate that accompanied it peaked.

The slips have varying degrees of preservation and the writing includes lost characters, so interpretation has been difficult. This has been a cooperative effort; images of the strips have been posted online and scholars have debated their readings in online discussion groups. As a result, some passages have actually been published in English before an official version has come out in Chinese.

If you are curious about what is in these strips, I recommend Ian Johnson's essay in the New York Review. Two points interested me: first, the Daodejing  or Book of Changes seems actually to be very old, since the fragments from the bamboo slips line up very closely with later manuscripts. Second, our versions of the Confucian classics do indeed seem to be cleaned up, almost sterilized renderings of what was a great, ongoing debate before Qin Shi Huang Ti's time. Since the current Chinese government likes to quote those sterilized classics in justifying its rule, the discovery of dissenting voices within the Confucian tradition is causing quite a stir in certain Chinese circles.

But how wonderful that our knowledge of the distant past can be enlarged in such a dramatic way.
Posted by John at 7:02 AM