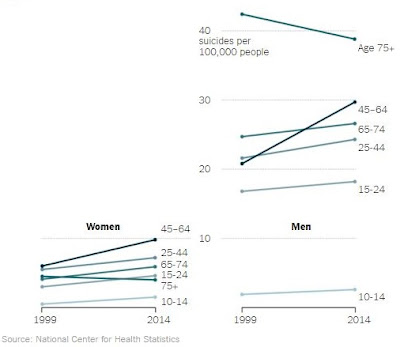 Another study out today confirms what all the other recent studies have shown, that suicide is rising in America, especially among the middle aged. This study found that from 1999 to 2014 the suicide rates for both men and women 45-64 rose by about 50 percent. This study did not consider race, but others have found that the increase in concentrated entirely among white people, which means that the rate for whites must have risen by at least 60 percent.

The obvious reaction is the one voiced by liberal Harvard professor Robert Putnam:


This is part of the larger emerging pattern of evidence of the links between poverty, hopelessness and health.

Economists argue non-stop about how real the decline in median income has been, but whatever their numbers show the sense of decline is real, and it is killing people. I think that both liberal and conservative interpretations of this malaise have something to be said for them. The economic decline of the working class must be a major factor. But it may be that the decline in religious practice is another, and perhaps the increasingly disorienting nature of life with more freedom but fewer certainties.
Posted by John at 6:12 PM

Whatever your income level, if you don't have a support structure, you suffer. If you don't belong to a community of some sort, if you're estranged from your family, if you hate your coworkers, if you have very few friends, and if you're generally on your own when things turn ugly, life can get miserable fast.

Of course, if you have money you have options.

But if you're poor and barely making ends meet? You get sick and have to take care of yourself, and hope you don't have to resort to the ER because you'll go into debt with hospital fees. You get depressed and go untreated, without support, slowly spiraling down further into darkness. You get laid off and you scramble to find a new job, any job no matter how miserable, to keep you afloat - assuming you aren't completely incapacitated by your health or mental state, that is. You eat cheap, heavily processed foods that fill you up but aren't nutritious, because you have to spend as little as possible on not constantly feeling hungry. You know you should exercise more, but you don't have the space or time, even if you had the energy or emotional fortitude left over after the workday - and as a bonus, you feel guilty about not exercising more, and feel ugly and unattractive for not being fitter. And you can't move anywhere except down - you're stuck where you are unless you find someplace that has an even lower price tag than your current abode, and even then you need to get lucky and be stable enough to afford moving.

But that's all if you're on your own. If you have friends, family, neighbors, religious/ideological comrades, et cetera who care about you and will support you in your times of need (with the expectation of reciprocity), things are far less binary. So long as you have a safety net to catch you when you fall, and to carry your weight when you can't carry it yourself, you can not only survive, but actually live quite happily.