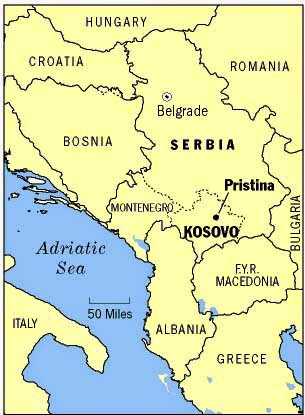 Kosovars -- the Albanian inhabitants of the old Serbian province of Kosovo -- are discovering that national independence is no solution to the problems of life:


Afrim Syla, 48, of Pristina, who makes pancakes for a living and recently had a son join the exodus, concurred: Once, Kosovars were laying down their lives to stay here. “Now,” he said, “we have come to a situation where we leave of our own free will.”

Sixteen years after NATO, in its only war, drove out Serbian security forces so 850,000 Kosovo Albanians expelled by the Serbs could return home, the flow of Kosovo Albanians has reversed. For months now, buses have been bringing Kosovo Albanians through Serbia to the porous land border with Hungary, in the European Union. . . .

But Kosovo’s Albanians, most of whom are Muslims, are not being greeted with open arms. In another twist, they are being forced back to their land, deemed too physically — if not financially — secure to warrant asylum status.

In early February, more than 3,000 people were fleeing Kosovo every day, a rate that would bring its population to zero in less than two years.

File this under “war solves no problems.”

Well, that's not really fair; the war solved the problem of Kosovars being driven from their homes by Serb militias. It also led to the fall of Slobodan Milošević and the collapse of radical Serb nationalism, which probably counts as a good thing. But the costs -- death, destruction, billions of dollars, increased tension between NATO and Russia -- were significant, and the Kosovars themselves would probably have been better off if we had simply offered them all asylum.

Now they are left as peasants in a huge rural slum on the edge of Europe, despised by everybody. The Pristina bus station has a big sign urging people to stay so the nation can survive, but why should anybody care about that?
Posted by John at 7:20 AM