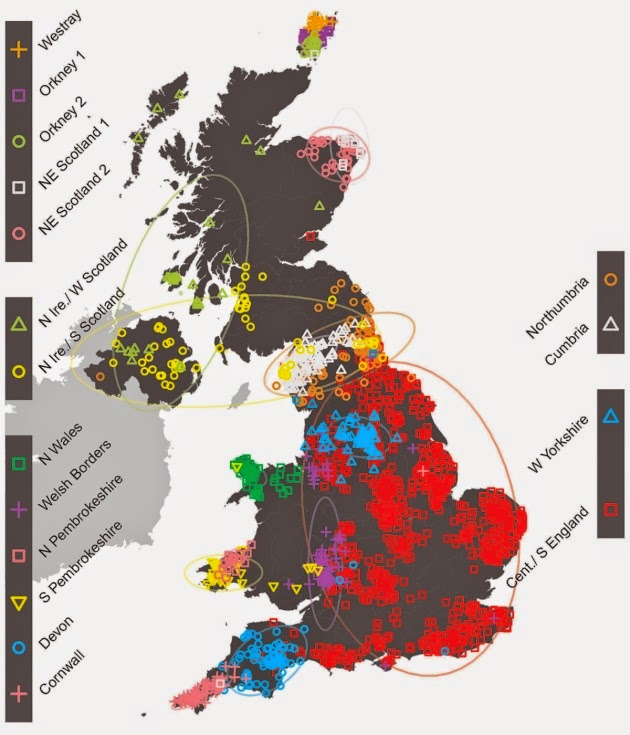 New paper in Nature based on genetic study of modern Britons:


Today, few Britons have ancestors from just one local region of the United Kingdom, so it is hard to identify patterns of genetic variation specific to any one place. But Donnelly and his team found 2,039 Britons of European ancestry who lived in rural areas and knew that their four grandparents were all born within 80 kilometres of each other. Since these volunteers’ DNA was a mosaic of their grandparents’, who themselves were to known be strongly linked to one British region in the late nineteenth century, Donnelly hoped to find genetic variation that clustered neatly with their grandparents' geographic location.

So it proved: a statistical model lumped participants into 17 groups based only on their DNA, and these groupings matched geography. People across central and southern England fell into the largest group, but many groupings were more isolated, such as the split between Devonians and Cornish in Britain’s southwest.

Ok, so that's cool; they made these discriminations based solely on the DNA, and they turned out to have a geographical distribution. But what does it mean?

One important finding is that there is a single "English" population in genetic terms; there was enough mixing of people all across England well before 1900 that their study could detect no regional differences. 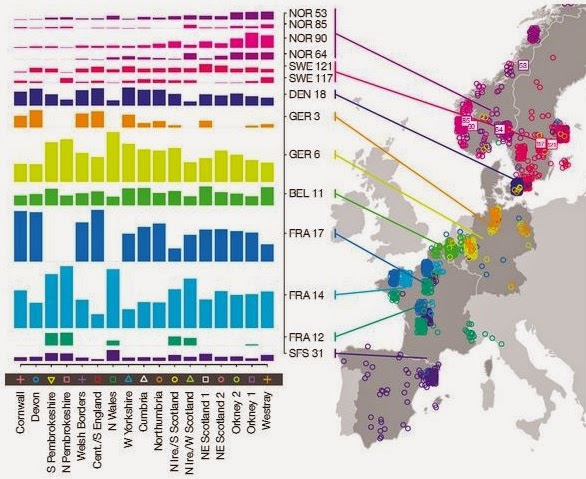 And where did all the people come from? They published this map and bar graph showing connections to continental populations. I urge a great deal of caution in this. All the people of northwestern Europe are closely related in genetic terms, so we are talking about inferences based on very small differences; the diversity within these groups is much greater than the differences between groups. But, anyway, this is what their data shows. The biggest contributions come, as you might expect, from the continental populations directly across the channel and the North Sea: Frisia, the lower Rhine Valley, northwestern France. They think the absence of FRA 17 (dark blue) from Wales implies that these people came to Britain later than FRA 14 (light blue); so the earlier might be a Neolithic migration, the later an entry of Celtic-speaking people in the Bronze or Iron Age. (The connection to Spain represents the first Neolithic colonists of Europe, whose genes are still strong in the western Mediterranean; the modern people who seem to be most like them are in Corsica.)

The authors estimate that the Anglo-Saxons contributed about 10 to 40% of English genes, so they project a 7th-century population of England that was 10-40% Anglo-Saxon immigrants, with a most likely value of about 35% (GER6, GER3, BEL11). They could not find any region with a large admixture of Danish genes (DEN 18), nor were Danelaw areas any different from the rest of England, so they project a very limited genetic contribution from the Danish Viking invasions. (Of course since some of the Anglo-Saxons came from Denmark, that would be very hard to tease out.) And note that the Anglo-Saxon contribution to the population of lowland Scotland is about the same as for England.

So quite fascinating. If it turns out to be true.
Posted by John at 12:43 PM