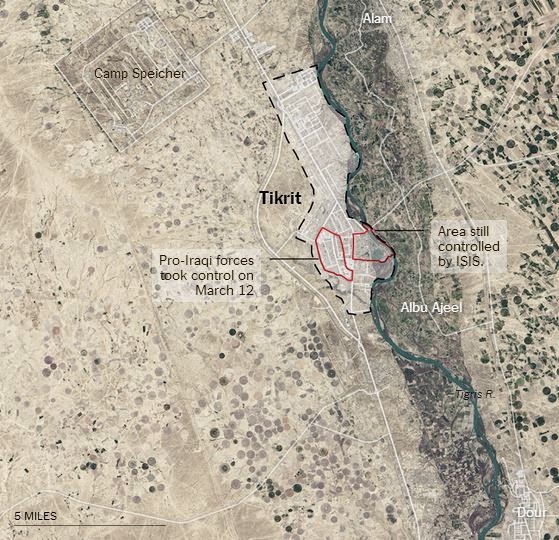 The news from Tikrit is that rather than fleeing into the desert (as I think the government was hoping), a few hundred Islamic State fighters have dug themselves into the downtown area, ready for a showdown. The government's commanders are acting a little like a dog that finally catches a mail truck-- now that they have the Daesh right where they want them, they aren't sure what to do about it. They have called a "pause," which they say is to organize their forces, bring up reinforcements and give civilians a chance to escape. Why they should need reinforcements when they already have a 50-1 advantage is a bit mysterious, but perhaps the volunteer militias that make up the bulk of their forces get worn out quickly in combat. They certainly have plenty of heavy weapons. Iran has supplied them with numerous truck-launched rocket systems that make the Pentagon nervous, because 1) they are notoriously inaccurate, and 2) the Iraqis don't know how to use them, which American officers worry is a recipe for lots of unnecessary civilian casualties. The rather lackadaisical nature of this offensive is confusing to those of us who grew up reading about World War II; can anyone imagine what Patton or Zhukov would have said if their men had "paused" and called for reinforcements in the face of 250-odd irregular infantry? 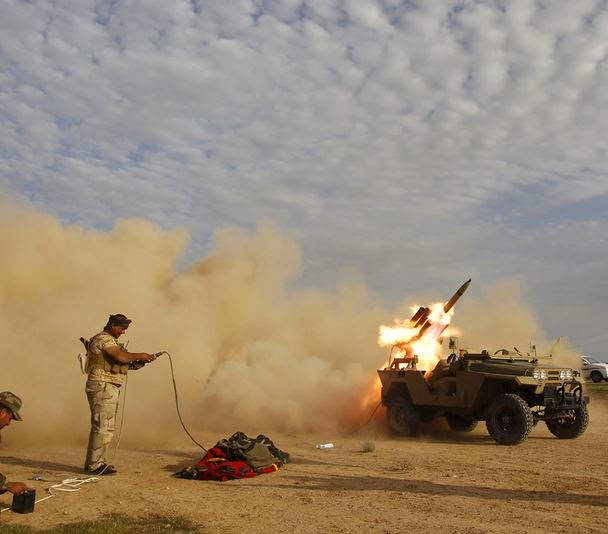 But, hey, it's the Iraqis war, and I do still believe they will eventually get around to winning this battle. Meanwhile the Islamic State is having its own problems; civilians have reported seeing some IS soldiers shooting others for deserting the battle front around Hawija, near Kirkuk.

As an aside, I was a little disturbed to discover that the country providing the most foreign soldiers to the IS is Tunisia (1,500 to 3,000, according to the Times). Tunisia is the most successful state in North Africa, perhaps in the whole Arab world, with a functioning democracy that stands as the only lasting achievement of the Arab Spring. Tunisia's situation is really more than one can hope for most of the other countries in the region. So if even Tunisia's level of economic and political success is not enough to keep thousands of young men from joining the Islamic State, what would?
Posted by John at 8:17 AM

Even outnumbered 50 to 1, a small dug in force with sufficient ammunition and firepower can inflict substantial damage on even professional troops, particularly if the terrain is in their favor.

Plenty of WWII's platoons and companies "paused" when faced with only one or two enemies who just so happened to be sitting in a pillbox with a machine gun and sightlines so good they could practically spell out "enfilade" with the fallen corpses of those foolish enough to try and advance against them. Whether that seems absurd to your or not, if you try to march 100 men into a killzone like that, you're gonna suffer huge casualties for no good reason.

So yeah, by all means I say let them pause. Call in some airstrikes or some artillery or mortars - anyone that isn't a bunch of untrained militiamen with unfamiliar foreign rocket trucks, please. So what if it takes a bit of time? What's the rush? Unless you've got some vital reason to take a position "yesterday", there's no point wasting lives trying to storm a defensible position when you could pause long enough to reduce the defenses to rubble instead.

Also, I'm not so sure about the Tunisia situation.

To return to the WWII comparison, America provided untold numbers of troops and support to the Allies, despite conditions in America being far and away the best out of all the Allied countries. Even before Pearl Harbor and our official entry into the war, we were sending huge amounts of supplies and weapons overseas - far more than our allies could produce. And yet no one asks why did America, with all its economic and political success, end up being the biggest contributor to the Allied war effort?

People don't join ISIS just because of poor local conditions. They also join because of broader religious, cultural, and political motivations. They join because they believe the major Western Nations are not trustworthy and are plotting how best to exploit the Islamic world - and they actually have a lot of sound historical precedent to support this notion. It's a rift that has existed between the two cultures for hundreds of years, and it's never been bridged successfully or lastingly.

The impression I have is that when there's a pause like this in contemporary Middle Eastern fighting, there's some negotiating going on. The Iraqis may be trying to see if some or all of the apparent diehards can be persuaded or paid enough to surrender or switch sides, or just to go elsewhere--and of course, the Iraqis may just massacre the ISIS once they surrender or are on the road.

G., I agree that young men joining ISIS are responding more to the general situation of Islam vs. the west than just to local considerations. But realistically, how much better can that situation get over the next decade? I very much doubt that in 2025 either Iraq or Syria will be in anything like the condition of Tunisia today. Which is a depressing thought.

It's not always about things getting "better".

Sometimes people just want to not feel helpless and powerless - they want to feel like they have some measure of control over their lives. Even if it all ends badly, often all that matters for people is the notion that they were somehow masters of their own fates. If terrible mistakes are going to be made, they want the mistakes to be their own - not anyone else's.

Like with the recent article on the Kosovars, where you remarked that they would have all probably been better off just seeking asylum. While I have no doubt that's technically true, it completely discounts the fact that "rational self interest" is very often -not- the primary motivation for many people. They would rather suffer and die in their "homeland" than live and thrive anywhere else.

The funny thing is, we actually celebrate this behavior in other contexts. America's history and mythology is chock full of people who demanded "liberty" and "free will", often with disastrous results, or with success due more to sheer luck than to any real competance or correctness.