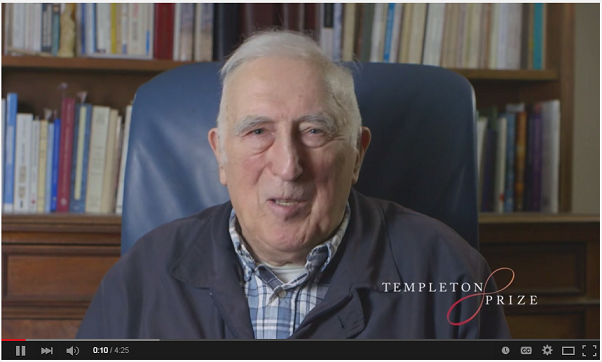 
Jean Vanier, the founder of L’Arche, a revolutionary international network of communities where people with and without intellectual disabilities live and work together as peers, has won the 2015 Templeton Prize.

L’Arche encourages people toward mutually transformative relationships, where those who help are transformed by those they encounter. Vanier discovered that those people who society typically considers the weakest enable the strong to recognize and welcome their own vulnerability.

What began quietly in northern France in 1964, when Vanier invited two intellectually disabled men to come and live with him as friends, has now grown into 147 L’Arche residential communities operating in 35 countries, and more than 1,500 Faith and Light support groups in 82 countries that similarly urge solidarity among people with and without disabilities.

Video of Vanier speaking here; more about him here.
Posted by John at 7:54 AM

My own personal experiences befriending a young blind woman taught me a lot about what I and most others take for granted.

Prior to that I had always liked to think that I was at least reasonably empathetic of those less abled than most, but until you actually spend time with someone who lives with a disability it never really hits home in a profound way. We can all logically understand and conceive of disabilities, but it's another thing to step into their daily lives and be even just a peripheral part of the challenges they face daily.

It's also interesting the way living and interacting with someone like this can expand your own horizons and help you find additional joy and meaning in otherwise routine things. Two of my fondest memories of the time I spent with this friend were completely banal events - going grocery shopping, and taking a recreational evening drive, in both cases with an additional friend along with us. We somehow decided it would be a lot of fun to leave basic navigational decisions up to the one of us who couldn't see where we were going - and we were right!

The trust that you have to place in those around you to navigate in the world without sight is staggering, and it was very humbling to have someone come to trust me so readily and so deeply. At the same time, I was amazed to learn of the routine sorts of neglect she dealt with when not receiving professional assistance or care - when we first met she was visiting friends and family in an unfamiliar town, and they had blown her off to do other things, leaving her temporarily stranded and alone in a strange and crowded public place. She said that sort of thing happened fairly regularly, and she had simply gotten used to it - typically just staying put until someone "got around" to retrieving her, even if it took all day. If worse came to worse, she said she always had her cell phone (specially adapted for audio "displays" instead of visual ones) and could get help eventually, even if she had to call the police to come and drive her home.

She was inspiring in her self sufficiency and patience. Having been blind since birth, she had learned countless small ways of just managing on her own. She had simply come to accept the inconveniences of her life without complaint or anxiety. She was never self-pitying, never despairing or becoming frustrated with her situation. She was endlessly resourceful, and seemed to always want to make the best of any given situatuon.

She would even joke about her blindness to make others feel less awkward about interacting with her. To her it was just a fact of life, and she didn't want anyone to pity her or patronize her because of it. She just wanted people to treat her like anyone else, with the minor exceptions of being mindful (and not self conscious!) of her needs and difficulties. She just wanted to have fun with her sighted friends and peers, and to experience the world and life's joys as best she could. I am eternally grateful to have met her, and it was one the greatest honors of my life to become one of her close and trusted friends.