Thomas of Lancaster, Traitor to Saint 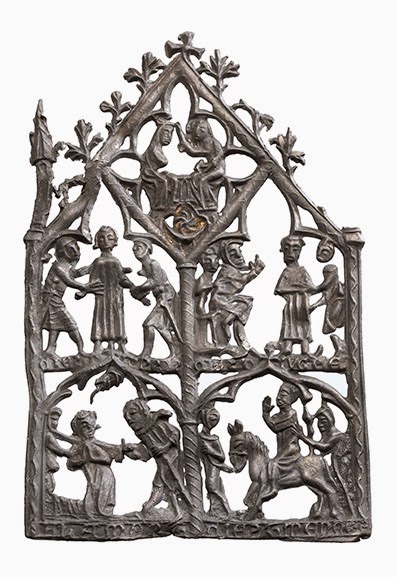 Thomas of Lancaster was one of the main political players during the troubled reign of Edward II, leader for a time of the baronial opposition to the king's "tyranny." He even signed a treaty with the Scottish Earl Douglas, offering land and money in exchange for Scottish help in overthrowing Edward. But the king defeated him and executed him for treason.

It was the most sordid kind of medieval politics, no principles to speak of on either side except the pursuit of power and a deep personal hatred. But following another rather common medieval trope, Lancaster became a martyr to his followers, with a collection of miracles and two separate sites of pilgrimage (his tomb and the site of his execution). Now an artifact from the cult of this dubious saint has been dug up in London, this votive plaque. These lead alloy plaques were mass produced for sale to pilgrims, but only fragments had been found before:


In slightly garbled French, the panel is read clockwise from the top left: ‘here I am taken prisoner’; ‘I am judged’; ‘I am under threat’ and lastly ‘la mort’ (death). The Virgin Mary and Christ look down from heaven, ready to receive Lancaster’s soul.

The History Blog has more on the cult of Lancaster:


Notwithstanding his lack of a Church-sanctioned halo, Thomas continued to be revered locally at least until the Dissolution of the Monasteries. His relics were believed to hold specific healing properties — his belt helped women in labour, his hat cured migraines — and a hymn called the Lancaster Suffrage was included as part of the daily prayers in the psalters and Books of Hours of wealthy Lancastrians. Here’s the one from Manuscript 13 (ca. 1330) in the Bridewell Library at Southern Methodist University:

Antiphon: Oh Thomas, Earl of Lancaster,
Jewel and flower of knighthood,
Who in the name of God,
For the sake of the state of England,
Offered yourself to be killed.

Versicle: Pray for us, soldier of Christ.

Collect: Almighty everlasting God, you who wished to honor your holy soldier Thomas of Lancaster through the lamentable palm of the martyr for the peace and state of England just as he is lead through the sacrament for God’s own exceeding glory [and] through your holy miracles. Bestow, we pray, that you grant all faithful venerating him a good journey and life eternal. Through Christ our Lord, Amen.

Since both Thomas of Lancaster and the cult of his miserable remains figure in my thus far unpublished historical fantasy about this time, perhaps I should put in one of these votives. Or someone could suggest to a noble lady in labor that she send for his belt.

But maybe "Pray for us, soldier of Christ" is the best bit, and I think I know how to fit that in.
Posted by John at 7:33 PM