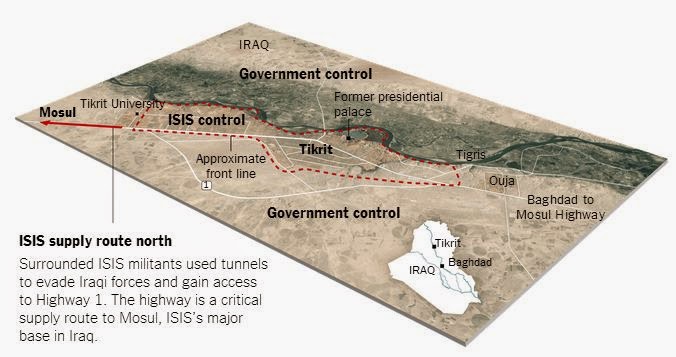 Times reporter Rod Norland finally made it to the front lines in Tikrit, and what he found there is a lot less positive for the Iraqi government than reports coming out of Baghdad:


After four weeks of the government offensive the Islamic State’s fighters are more numerous and still hold much more territory here than officials had previously allowed, even with heavy American airstrikes added in.

According to Iraqi military officials and fighters on the ground in Tikrit, ISIS still dominates or controls about 20 square miles of the city, everything from the edge of Tikrit University in the north, to the far end of the New Ouja neighborhood in the south, a distance as much as eight miles north to south. That encompasses most of the populous parts of the city, which generally lie west of the Tigris River; all of its main downtown and business districts; the government quarter and the former palace of Saddam Hussein.

There may be more than 2,000 Islamic State fighters in the city, not the 500 reported in Baghdad, and they still maintain communications with their main bases farther north:


Not only does ISIS still dominate the 20-square-mile area between Tikrit University and Ouja, but the Iraqi military still had not succeeded in taking control of Highway 1 north of Tikrit, between Tikrit and Mosul, where ISIS has its major base in Iraq. The militants in Tikrit have been able to keep using that supply line to the north even though they are surrounded within the city, using tunnels to evade government lines and keep access to the road.

Norland noticed that the guns defending Iraqi army headquarters point in every direction, suggesting that the Iraqis fear hit and run attacks from behind as much as the enemies they are besieging.

The "pause" called by the government forces seems to have given the Islamic State time to regroup and solidify its defenses. Add to this the infighting on the Iraqi side -- some of the Shiite militias said they were dropping out of the campaign after the government asked for American air strikes -- and this could have the makings of a disaster. Relying on air strikes and artillery means the city will be pounded to rubble in any case.

The disaster for Iraq's beleaguered people goes on and on.
Posted by John at 7:24 AM