Treating the "Superbug" MRSA with an Anglo-Saxon Remedy 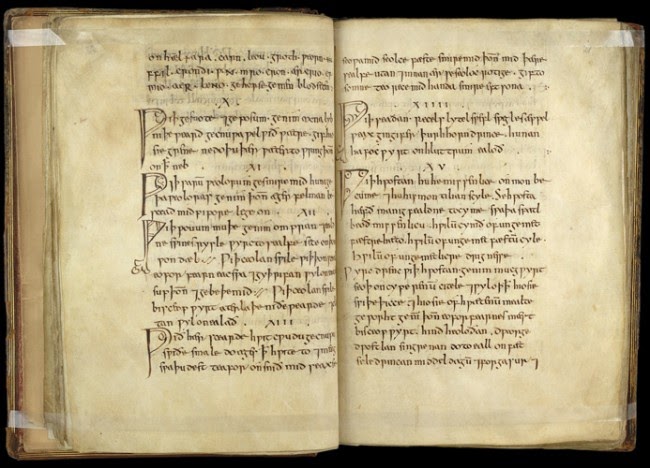 What if some of those strange herbal remedies in medieval medical books really work?


Dr Christina Lee, an Anglo-Saxon expert from the University of Nottingham has enlisted the help of microbiologists from University’s Centre for Biomolecular Sciences to recreate a 10th century potion for eye infections from Bald’s Leechbook, an Old English leatherbound volume in the British Library. . . .

Early results on the ‘potion’, tested in vitro at Nottingham and backed up by mouse model tests at a university in the United States, are, in the words of the US collaborator, “astonishing”. The solution has had remarkable effects on Methicillin-resistant Staphylococcus aureus (MRSA) which is one of the most antibiotic-resistant bugs costing modern health services billions. . . .

The recipe calls for two species of Allium (garlic and onion or leek), wine and oxgall (bile from a cow’s stomach). It describes a very specific method of making the topical solution including the use of a brass vessel to brew it in, a straining to purify it and an instruction to leave the mixture for nine days before use.

The scientists at Nottingham made four separate batches of the remedy using fresh ingredients each time, as well as a control treatment using the same quantity of distilled water and brass sheet to mimic the brewing container but without the vegetable compounds.

University microbiologist, Dr Freya Harrison has led the work in the laboratory at Nottingham with Dr Steve Diggle and Research Associate Dr Aled Roberts. She will present the findings at the Annual Conference of the Society for General Microbiology which starts on Monday 30th March 2015 in Birmingham.

“We thought that Bald’s eyesalve might show a small amount of antibiotic activity,” Dr Harrison comments, “because each of the ingredients has been shown by other researchers to have some effect on bacteria in the lab – copper and bile salts can kill bacteria, and the garlic family of plants make chemicals that interfere with the bacteria’s ability to damage infected tissues. But we were absolutely blown away by just how effective the combination of ingredients was. We tested it in difficult conditions too; we let our artificial ‘infections’ grow into dense, mature populations called ‘biofilms’, where the individual cells bunch together and make a sticky coating that makes it hard for antibiotics to reach them. But unlike many modern antibiotics, Bald’s eye salve has the power to breach these defences.”

This set me wondering. Over the course of the twentieth century researchers tested a lot of old folk remedies and generally found them to be ineffective against bacterial infection. But what if they were ineffective in the 20th century because bacteria had evolved resistance to them? What if they actually worked pretty well in the 10th century? And what if contemporary superbugs have, in the course of evolving resistance to our chemical attacks, lost the resistance their ancestors evolved to onion juice and comfrey? Understanding how rapidly bacteria can evolve, it seems to me, opens up all sorts of interesting questions in medical history.
Posted by John at 12:47 PM