The Battle for Tikrit 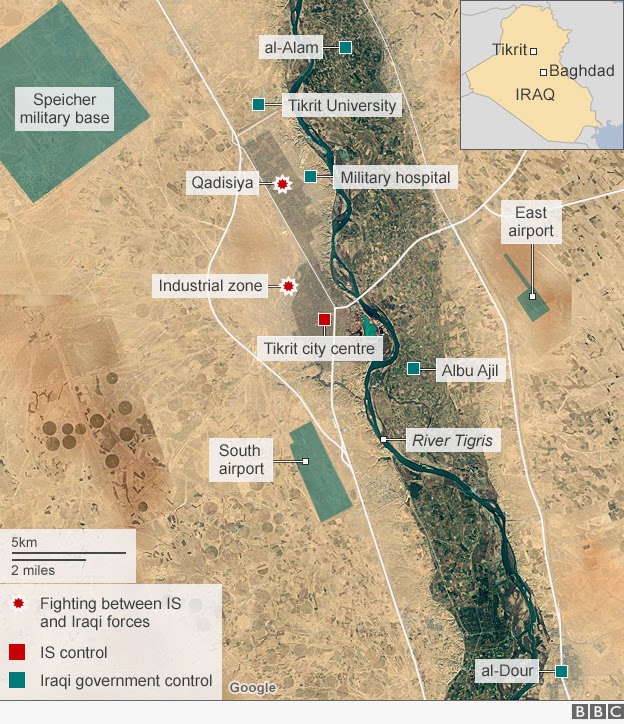 Interesting events in Iraq, where Iraqi government troops and Shiite militias are retaking Tikrit from ISIS. The Chairman of the US Joint Chiefs said yesterday that there was "no doubt" the Iraqi government would soon be in control of the city. The map above, from the BBC, shows locations confirmed to be in government hands in green, those still in ISIS hands in red, yesterday's battles as little explosions. You can see that the government's forces have not tried to drive straight into the city up the main highway, nor have they tried to surround it. They have enveloped it from the east and north, and they seem to have left the road west intentionally open, perhaps hoping the Islamic State's soldiers will make a run for it. Rumors assert that the real brains behind the Iraqi offensive is Iranian general Qassem Soleimani, who used to be an expert in helping Iraqi Shiites fight Americans. If so, it seems the Iranians have decided that the way to defeat ISIS is for Shiite ground forces to drive their soldiers out into the open desert where American planes will kill them.

Things are going so well for the Iraqi government in Tikrit that Americans have moved on from worrying about the battle to worrying that victorious Shiite militias might slaughter Sunnis in the city in reprisal for ISIS massacres last year. Let's hope General Soleimani can convince them that that's a bad idea.
Posted by John at 3:13 PM

"To a surrounded enemy, you must leave a way of escape." -Sun Tzu