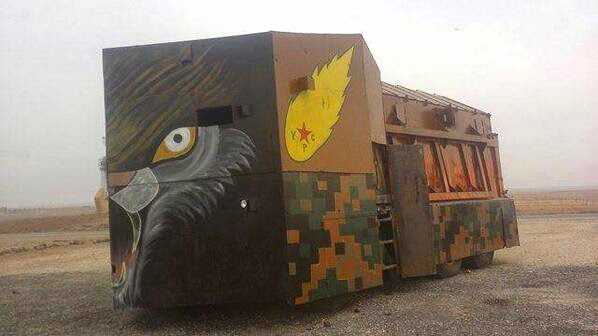 The ongoing civil struggles in Syria, Iraq and Libya have led to a great renaissance in the manufacture of improvised armored vehicles, which in turn has led to a bunch of blogs, tumblrs, etc. devoted to pictures of these weird creations. The one above is said to have been used by Syrian Kurds. 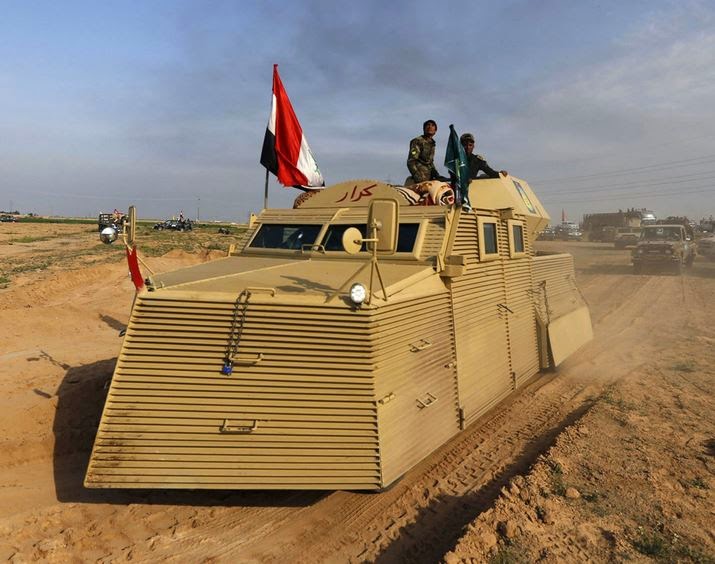 This one was recently used in Tikrit by Shiite militias. Something like this would last about ten seconds in a battle against the US or the Israelis, or anyone else with modern anti-tank weapons. But a lot of the fighting in the world today is between militias and rebel factions that do not have them. It is easy to provide a vehicle with protection against rifle fire, and with some work you can also protect against mortar fire and machine guns. A direct hit from an RPG would probably knock one of these out, but an angled shot might well glance off. I am not sure, but I suspect that the 20-40 mm anti-aircraft guns you see mounted on so many pickup trucks around the world would also be able to take one of these down; but most of these also carry such weapons, and they might provide a bit of an edge that would allow you to shoot the other guy first. 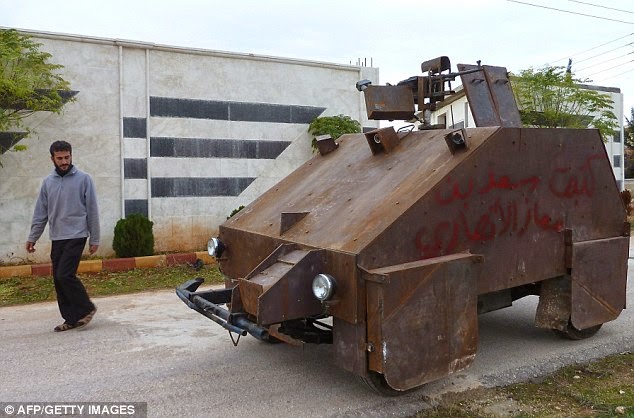 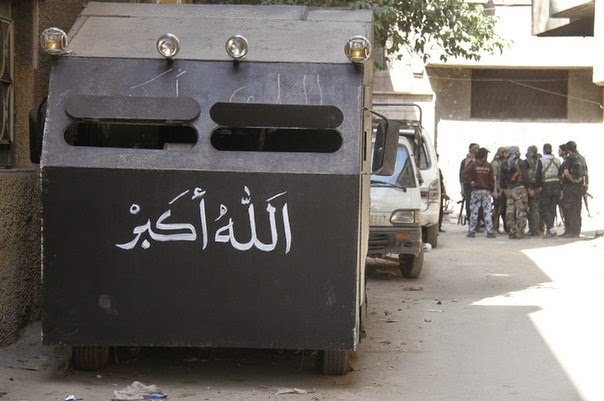 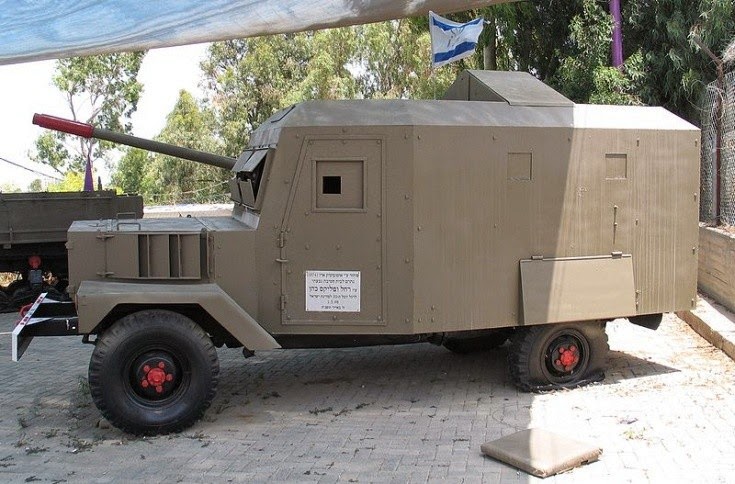 More photographed in Syria. Maybe the main point of these is actually psychological; after all, rifle and machine-gun fire from half-trained militias is probably not really that deadly, but stops attacks mainly by scaring the attackers into hunkering down. Maybe these vehicles help psych soldiers up for the charge. 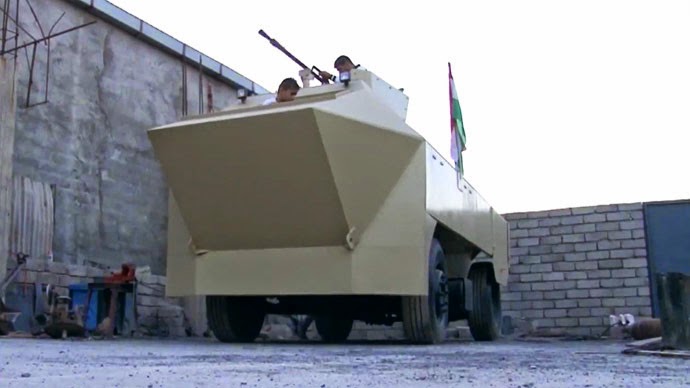 Or maybe it is the manufacture of these things in alley shops that is the main point; once you have made your own tank, you have to volunteer for the fighting to use it. This one was made by a Kurdish blacksmith in Iraq and appeared on British television last year. 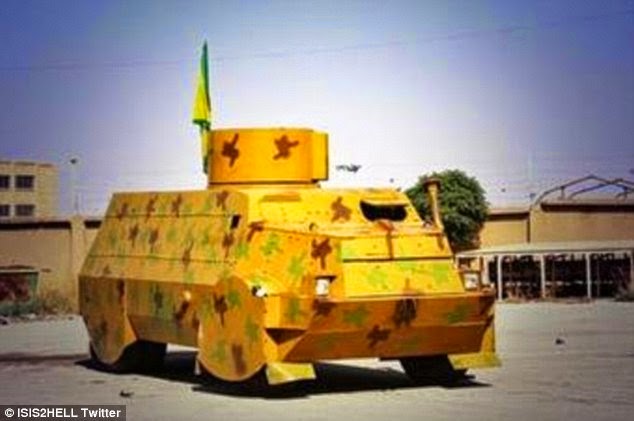 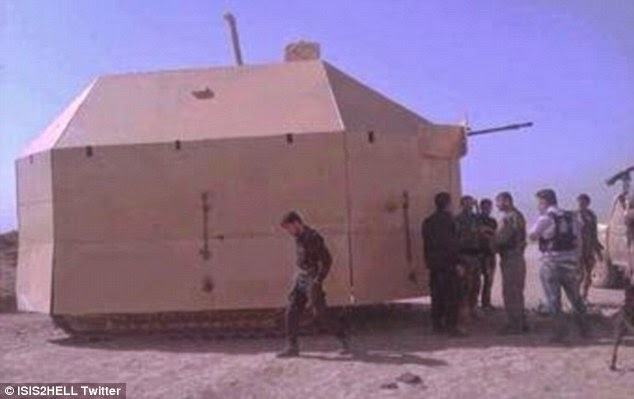 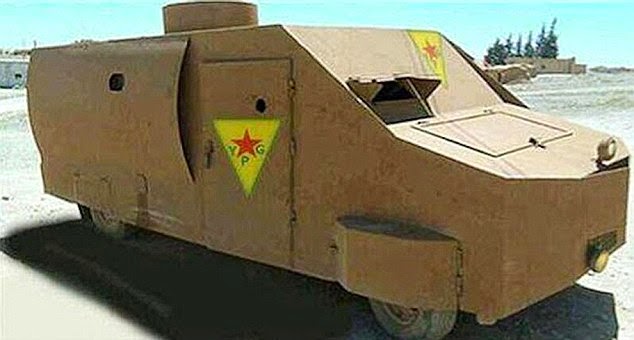 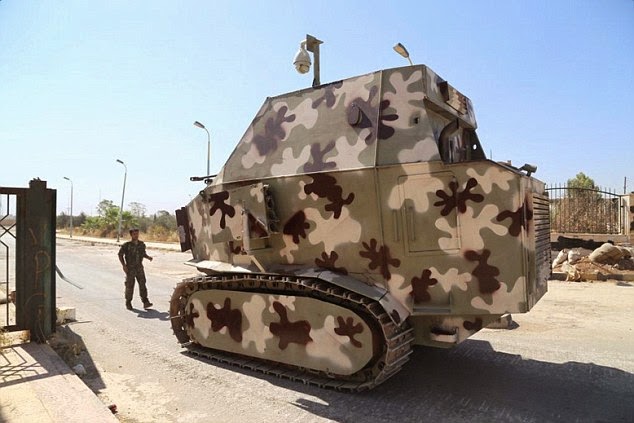 More from the Kurds; these images are also from British media, where they like to play up the Mad Max angle. 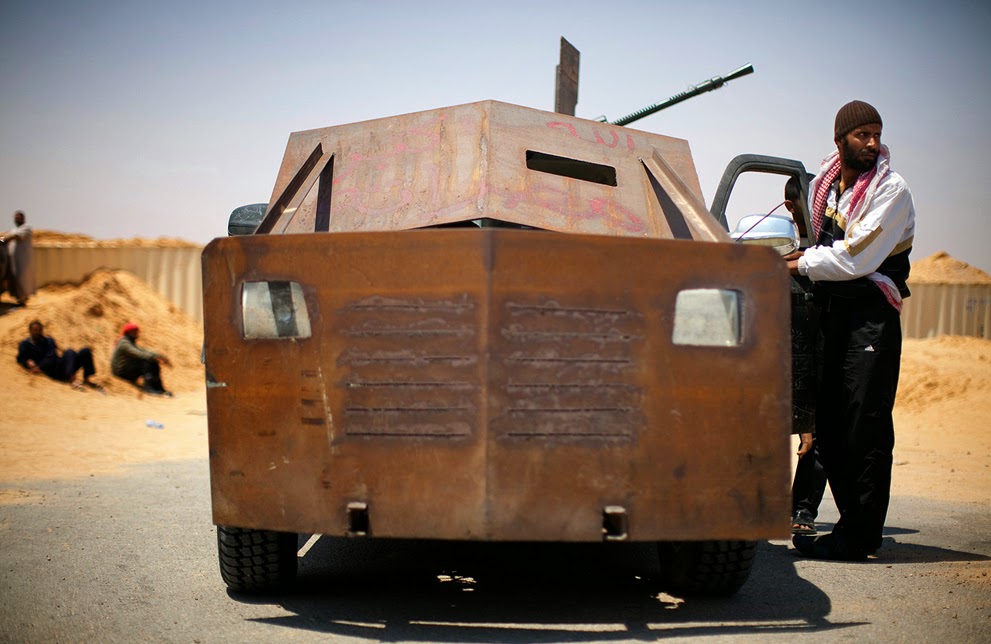 Here's one used by Libyan rebels during the fighting against Qaddafi's government. Maybe I'm not taking these very seriously, but I can't help thinking that there is a bit of larkishness about them. They seem to come from a place in between serious fighting and the pranks of young men with lots of time on their hands. And maybe there is something profound about the human condition in that, or at least in our attitude toward war.
Posted by John at 7:07 PM

You're spot on about protection from rifles.

Really it's a matter of defending against the primary threats you face. These soldiers are simply far and away more likely to run into a bunch of guys with Kalashnikovs than with RPG-6s. And if you're driving around in a normal vehicle, an AK is going to tear right through it. A single idiot with half a magazine of ammo can kill an entire car load of people very easily.

So if you're part of a militia movement and you spend a lot of your time driving around, and one day your buddy's truck gets shot full of holes with him in it, you start thinking, "Hey - I should armor my truck so I don't get killed by some idiot with half a magazine of ammo."

You actually don't need much to make reasonably effective plate armoring, and these vehicles prove that. They also don't take very long to make, or cost very much - just brutishly weld some thick enough scrap metal onto the sides. A little rust doesn't matter, you can just paint over it.

An element of "larkishness" doesn't really enter into the equation for me. These trucks are clearly being outfitted for the purpose of trying to keep bullets out of human flesh, and that seems deadly serious to me. If they "look funny", it's only because they're spartan affairs slapped together by desperate young men using whatever garbage they could find or afford to put between themselves and perforation.