The Last Ditch Effort of the Coal Warriors

Interesting story in the Times about the efforts of Republicans and coal companies to fight the EPA's new regulations on carbon dioxide emissions, which Obama wants to be a big piece of his legacy. Since Congress can't stop the regulations from being promulgated, they are relying on court fights and obstruction by state governments to keep them from taking effect. 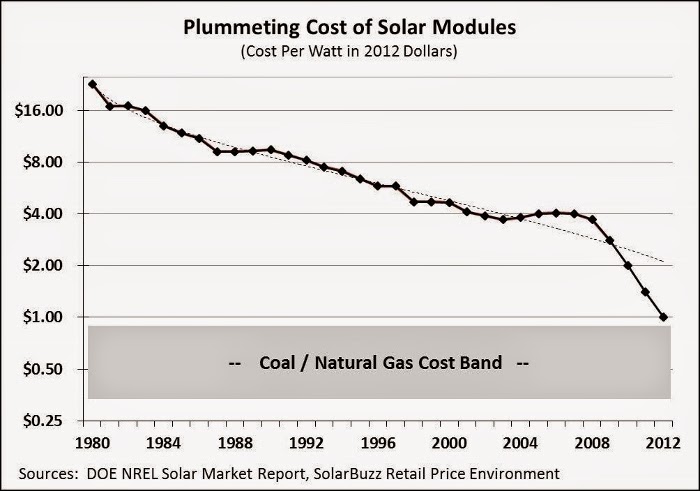 Legally and politically they may succeed, for a while. But technologically they are losing so fast that I don't think it really matters. Take a look at the graph above and you can see what I mean. The price of solar power isn't just falling -- down 99% in 40 years -- the rate at which it is falling is accelerating. The graph stops in 2012, with the non-subsidized price of solar power still just above that for fossil fuels. But as I have posted here before power companies are now bidding to offer solar power over the next five years at prices lower than those for coal and natural gas. When the wind is blowing on the plains you can get wind power for less than half the price of coal power.

Coal power is an old technology and future improvements in efficiency will be small. Solar power is tied to silicon chips and the technology is getting better by leaps and bounds. There is nothing state governments or coal companies could do about that even if they wanted to.

I also have to think that fighting so hard for coal is a bad strategy for Republicans. It ties them to the fading parts of the country, to fading industries, to technologies and attitudes that seem ridiculously out of date to most young Americans. In the short term it may rally working class Americans to them in battleground states like Pennsylvania, Ohio and Colorado, but in the long term they are anchoring themselves to the fading past of black smoke and black-faced men emerging from deep pits in the ground. The future is in silicon, and in the sun and the wind.
Posted by John at 7:41 PM

Solar also has the benefit of not requiring men to spend their lives breaking their backs toiling in the mines. Even hydroelectic and geothermal plants require obscene sacrifices in terms of human drudgery and manual labor.

Come Irishmen, both young and stern,
With adventure in your soul!
There are better ways to spend your days,
Than working down a hole!

I've seen men old before their time,
Their faces lined and gray.
I never thought so soon would mine,
Be lined in the self same way!