Carl Larsson, or, Art, Family, Love, and the Place of Refuge 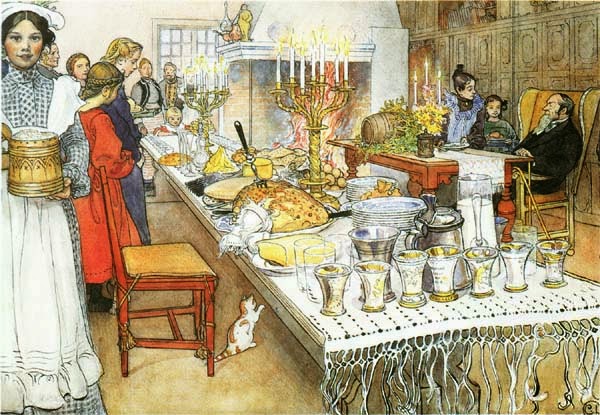 Carl Larsson was born into a poor family in a Stockholm slum in 1853. His father was a hard-drinking laborer who took his troubles out on his children, beating and cursing them. His mother, in Larsson's telling, somehow held the family together emotionally while working long hours as a laundress. All of which is, I think, very important to the kind of artist Larsson eventually became. 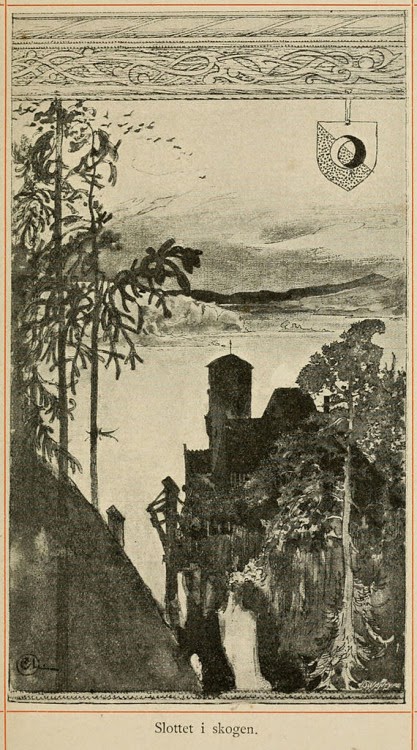 Larsson attended a charity school for poor children. When he was 12, one of his teachers recognized his artistic talent and arranged for him to be admitted to the high school run by the Royal Swedish Academy of Arts. After graduating he worked as a illustrator for newspapers and magazines, also working on several books with mainly mythological themes. In 1877 Larsson did the proper artistic thing and went to live in Paris, but he was unmoved by Impressionism or anything else about the French art scene. He hung around with other Scandinavians in an expat community at Grez-sur-Loing, now a Paris suburb but then a quiet town. There he developed his own style of watercolor painting and met another Swedish artist, Karin Bergöö. They married and moved back to Sweden. 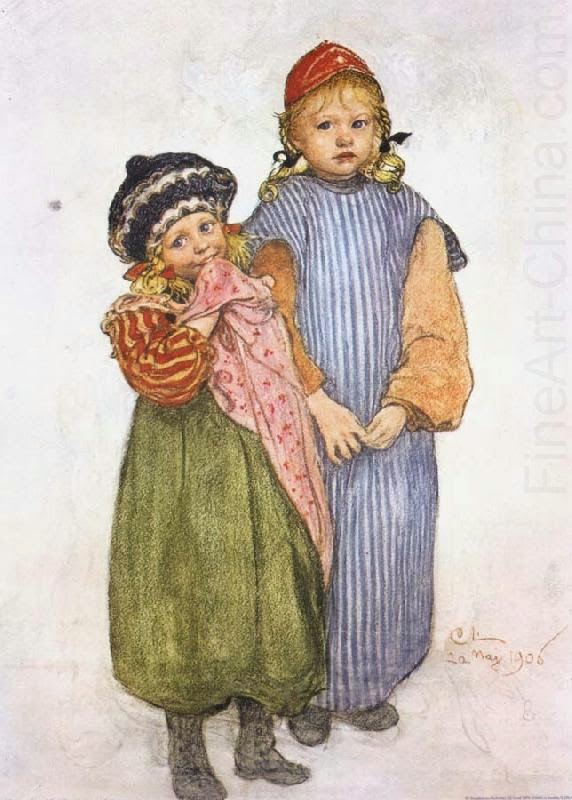 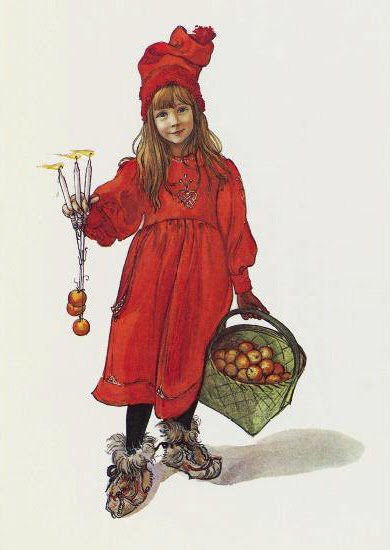 Back in Sweden Larsson set about creating the sort of warm and loving home he had never had. The Larssons had eight children, who became Carl's favorite subjects. His paintings of the family were published in books, two of which are known in English as A Family and A Home. 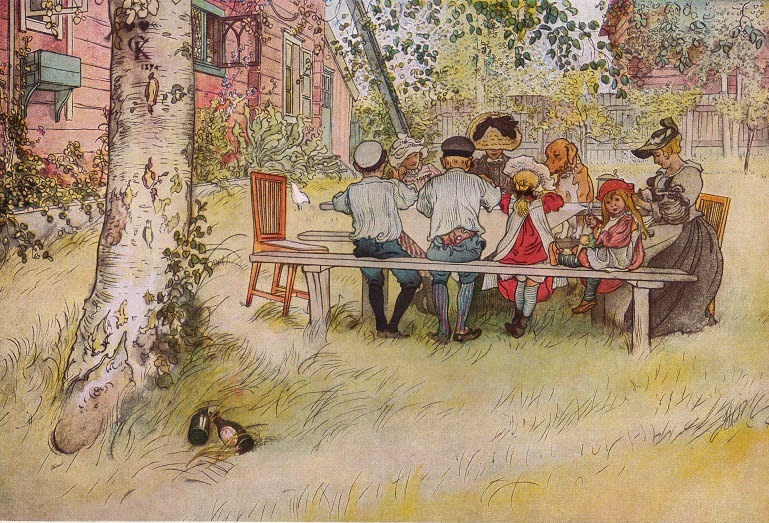 People loved these, and Larsson got rich. They fit into the same sort of slot as A Christmas Carol or Little Women or Norman Rockwell's paintings of American small towns, works that though contemporary were immediately seen as depictions of traditional ways in danger of being swept away by modernity. (See Christmas Eve at the top of the post.) They fit perfectly into the sentimental, family-centered world of middle class Victorians and Edwardians. 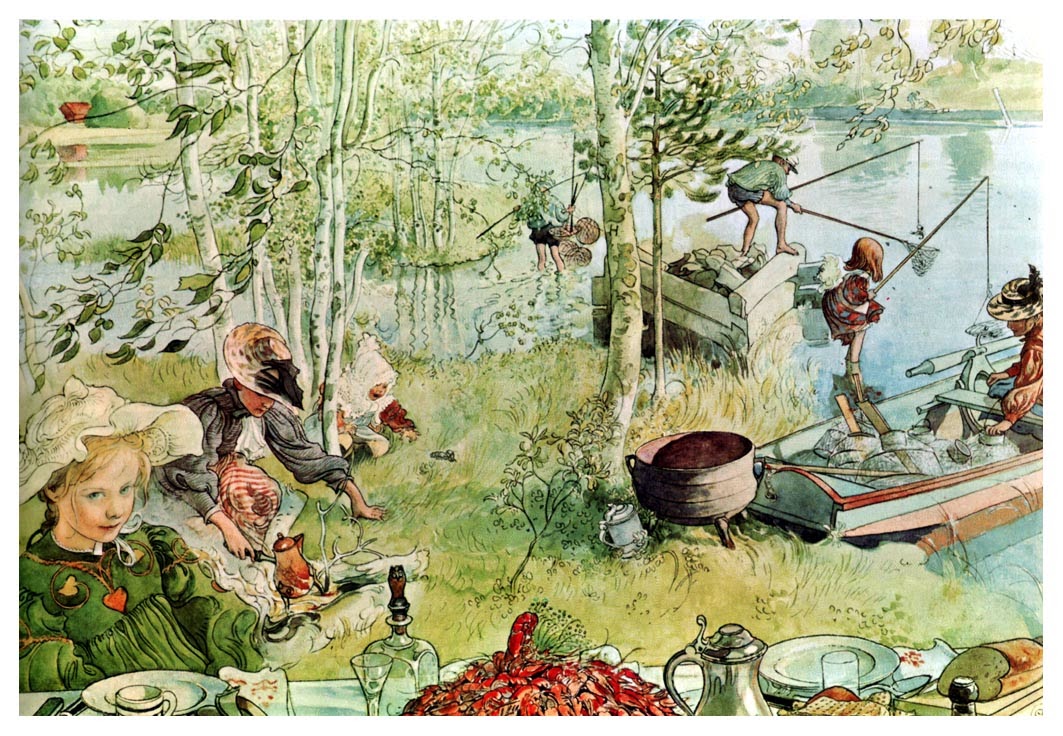 Besides being sentimental, Larsson's works were also Swedish, or at least Scandinavian, celebrating local ways: this is The Opening of Crayfish Season. 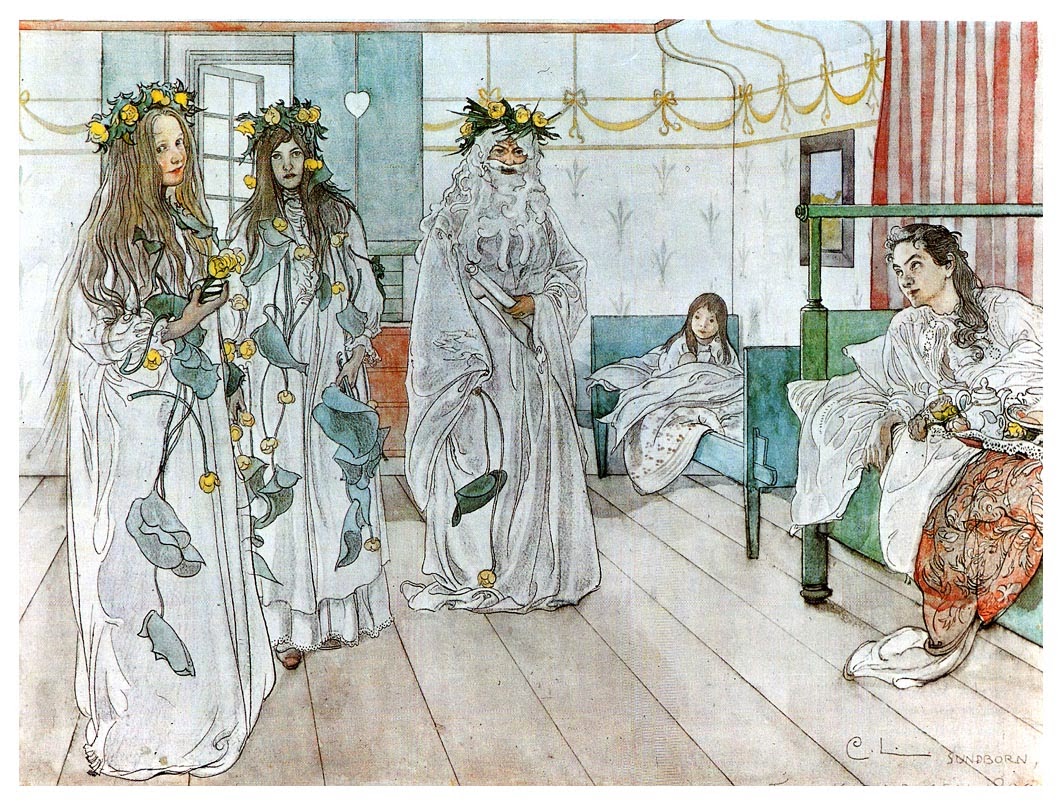 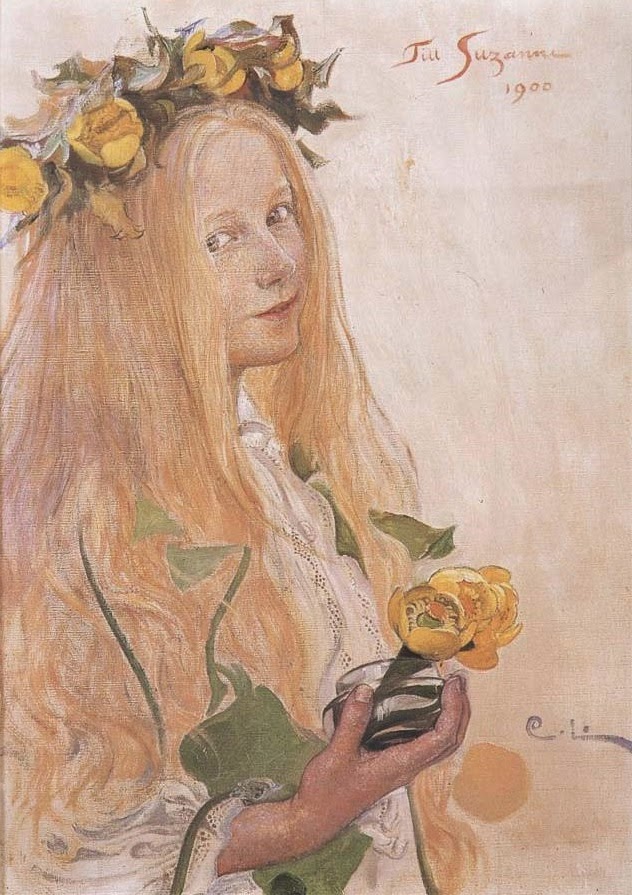 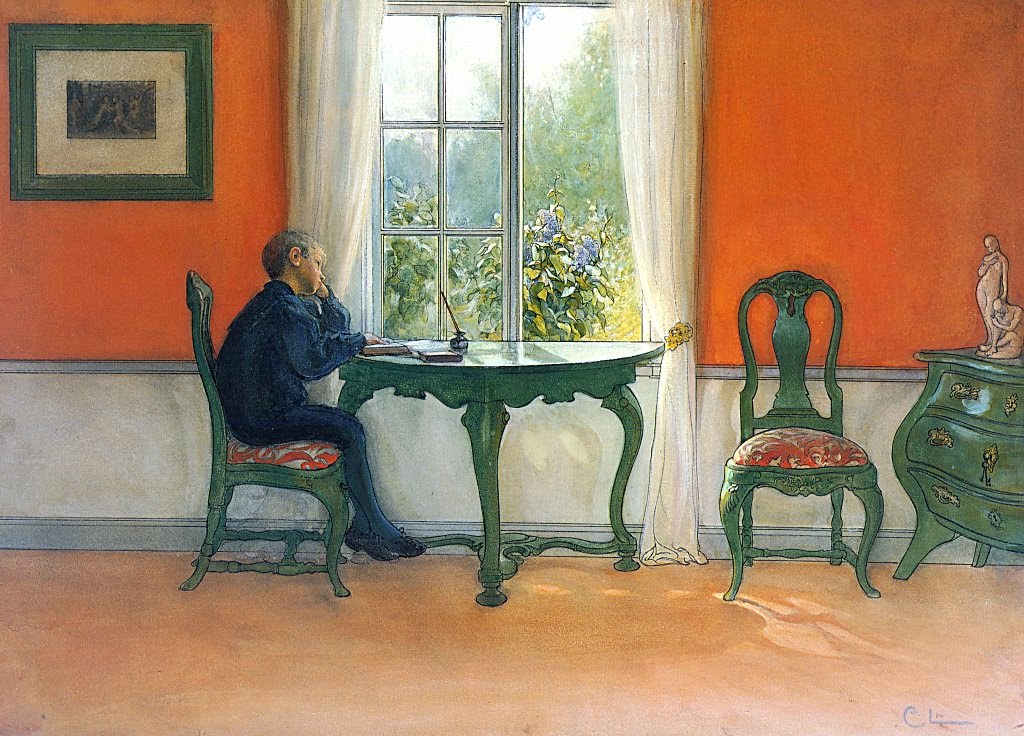 His money allowed Larsson to shower his own children with comfort and love. The home in Larsson's paintings is a safe refuge from the troubles of the world, a carefree place where children are free to be children and therefore do lots of cute and creative things.

This is his most famous self-portrait, which pretty much sums it up. In his autobiography he wrote that pictures of his family


became the most immediate and lasting part of my life's work. For these pictures are of course a very genuine expression of my personality, of my deepest feelings, of all my limitless love for my wife and children. 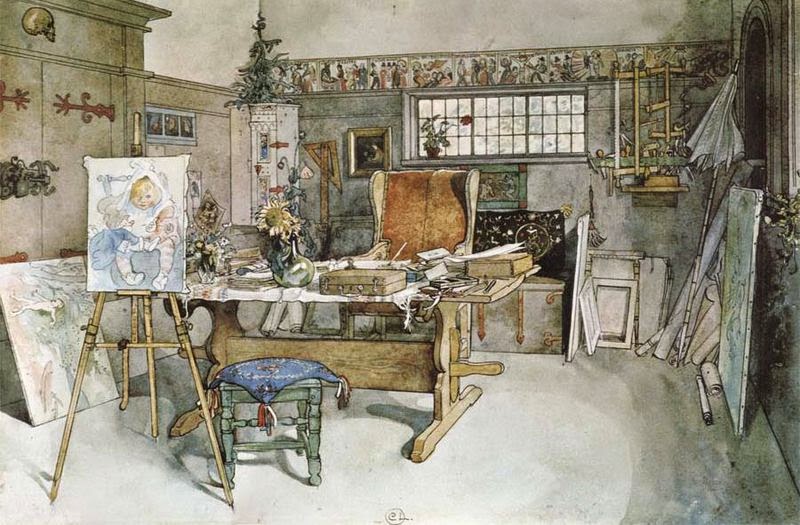 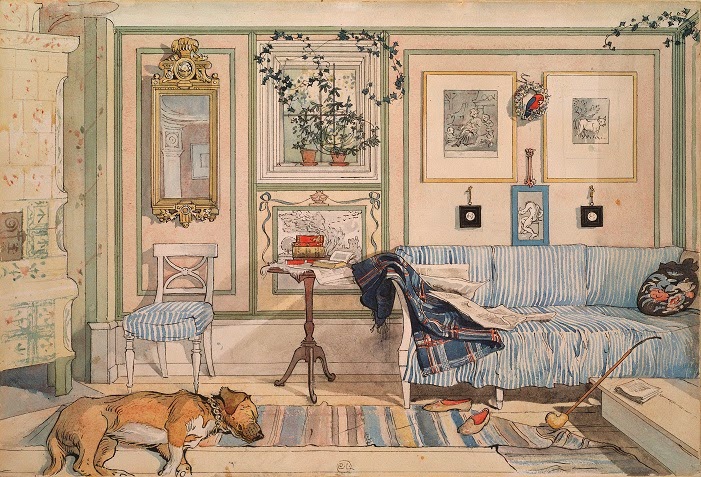 Larsson remains a sentimental favorite in Sweden; his house is a destination for people who grew up with his paintings, drawing tens of thousands of visitors every year. 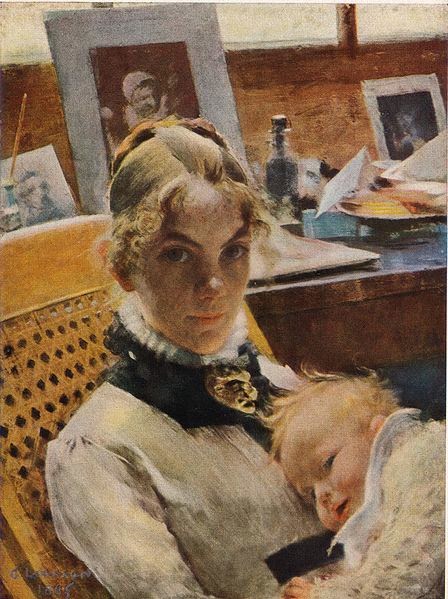 I actually started researching Larsson because of his illustrations to medieval legends. I turn to the artistic world largely to escape from the world of perfect domestic safety within which I live --my favorite things tend toward the dark and tragic, or at least have such elements in them. So I was fascinated to discover that for Larsson, his illustrations to dark, disturbing tales were a side line to a career devoted mainly to documenting (or creating) a domestic refuge from the cares of a dangerous and loveless world. 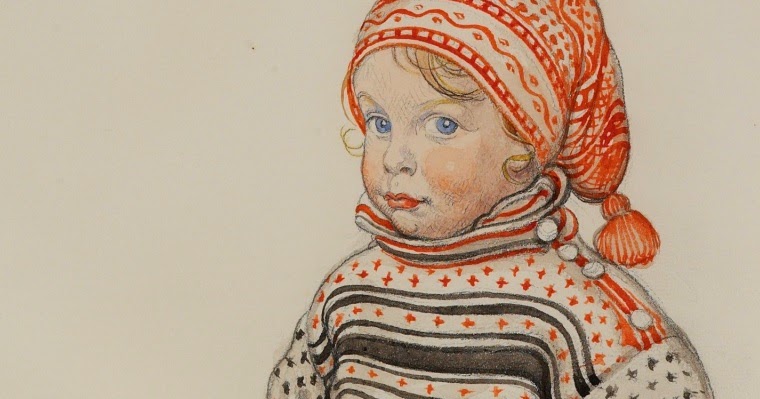 Love these drawings. His wife with baby and the one of his daughter Brita in her red outfit holding apples and candles are my favorites. She's adorable.