Exterminating Rats in the Galapagos 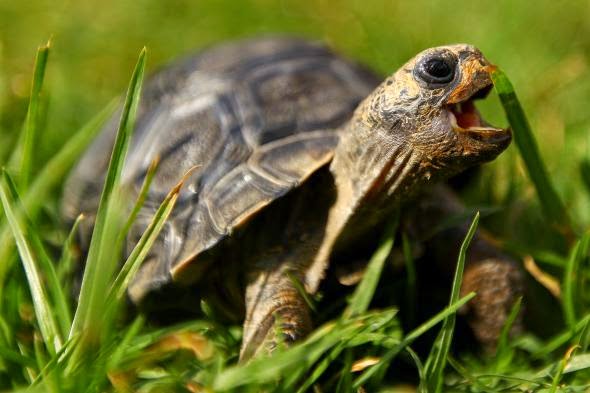 In their effort to protect the native flora and fauna of the the Galapagos Islands, scientists and the Ecuadoran authorities have lately been waging campaigns of extermination against invasive mammals. Feral goats and pigs are gone from some of the islands, and the native plants are already rebounding.

Rats are the bane of native species in the Galapagos. Because of the rats, the giant tortoises of some islands have not bred successfully in the wild for more than a century -- the rats eat every single egg. The rats are also a terrible menace to native birds.

But get rid of them? And yet the latest news is that rats have been so thoroughly eradicated from the island of Pinzón that native tortoises are breeding again. This was done with poison, after extensive testing to find some kind of rat poison that native birds and lizards wouldn't eat. Because they knew that native hawks would eat the dead rats, they trapped all the hawks, took them off island and brought them back after the poisoning campaign was over. Nearly a quarter of the hawks have died anyway, probably because the poison is lingering in the ecosystem longer than was expected. So it hasn't gone perfectly. And nobody thinks the war is over. But these efforts have certainly shown that in the Galapagos, it is possible to reduce the rat population enough to restore the native ecosystem. Amazing.
Posted by John at 7:32 AM

On a related note: Here is an article from NPR that shows what can happen when a species is introduced to an environment in which it has no predators. These GIANT walking sticks were thought to be wiped out by rats. A fascinating story, and a testament to life's durability.