Why Birds Fly in V Formation 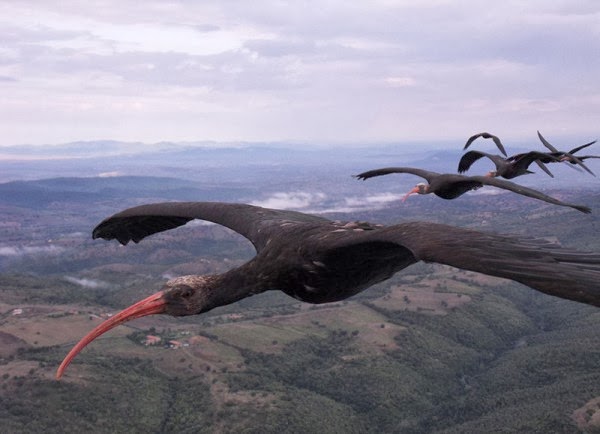 After pondering this question for decades, scientists have been able to come up with only two plausible reasons why so many migrating birds use that distinctive V formation: either they are just following the leader, or they are somehow using the eddies created by the birds in front to save energy. Airplanes can save fuel by flying in a V, so some scientists have speculated that birds can do the same. But the air currents created by flapping wings are much more complex than those created by fixed wings, so nobody was able to show convincingly that birds were really doing this. Until now:


The study, published online today in Nature, took advantage of an existing project to reintroduce endangered northern bald ibises (Geronticus eremita) to Europe. Scientists used a microlight plane to show hand-raised birds their ancestral migration route from Austria to Italy. A flock of 14 juveniles carried data loggers specially built by biomechanist James Usherwood and his lab. The device’s GPS determined each bird’s flight position to within 30 cm, and an accelerometer showed the timing of the wing flaps.

Just as aerodynamic estimates would predict, the birds positioned themselves to fly just behind and to the side of the bird in front, timing their wing beats to catch the uplifting eddies. . . . “We didn’t think this was possible,” Usherwood says, considering that the feat requires careful flight and incredible awareness of one’s neighbors. . . .

The findings likely apply to other long-winged birds, such as pelicans, storks, and geese, Usherwood says. The researchers did not attempt to calculate the bird’s energy savings because the necessary physiological measurements would be too invasive for an endangered species. Previous studies estimate that birds can use 20% to 30% less energy while flying in a V. “From a behavioral perspective it’s really a breakthrough,” says David Lentink, a mechanical engineer at Stanford University in Palo Alto, California, who was not involved in the work. “Showing that birds care about syncing their wing beats is definitely an important insight that we didn’t have before.”

I know you all feel much better knowing that this puzzle has been solved. And the next time a child asks you why birds fly that way, you'll be ready.
Posted by John at 8:23 AM