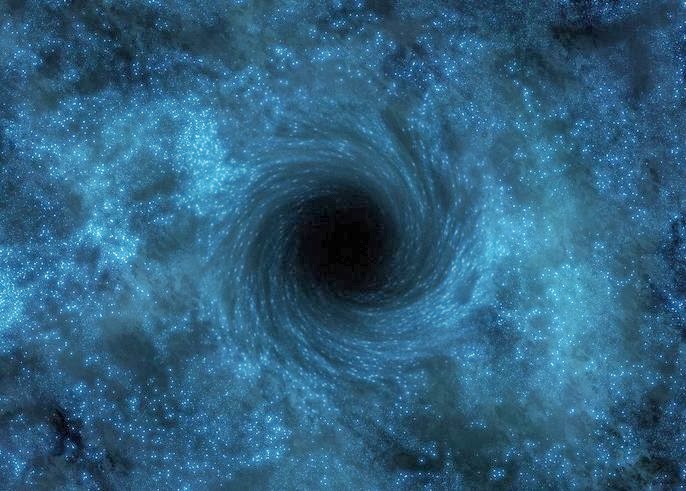 Black holes are one of the places that our two models of the universe, quantum mechanics and general relativity, clash head on. It was shown decades ago that the simple model of black holes, derived from Einstein's equations, cannot be reconciled with quantum mechanics. In particular the notion of an "event horizon", a barrier from which no light, matter or information can ever escape, violates all sorts of quantum principles. Just this week Stephen Hawking posted a new paper tackling the problem. Nature News:


The paper is an attempt to solve the so-called black-hole firewall paradox, which has been vexing physicists for almost two years, after it was discovered by theoretical physicists Joe Polchinski and colleagues. In a thought experiment, the researchers asked what would happen to an astronaut unlucky enough to fall into a black hole. Event horizons are mathematically simple consequences of Einstein's general theory of relativity that were first pointed out by German physicist Karl Schwarzschild in 1916. In that picture, physicists had long assumed, the astronaut would happily pass through the event horizon, unaware of his or her impending doom, before gradually being pulled inwards — stretched out along the way, like spaghetti — and eventually crushed at the 'singularity', the black hole’s hypothetical infinitely dense core.

But on analysing the situation in detail, Polchinski’s team came to the startling realization that the laws of quantum mechanics, which govern particles on small scales, change the situation completely. Quantum theory, they said, dictates that the event horizon must actually be a transformed into a highly energetic region, or 'firewall', that would burn the astronaut to a crisp.

This was alarming because, while the firewall obeyed quantum rules, it flouted Einstein’s general theory of relativity. According to that theory, someone in free fall should perceive the laws of physics as being identical everywhere in the Universe — whether they are falling into a black hole or floating in empty intergalactic space. As far as Einstein is concerned, the event horizon should be an unremarkable place.

Now Hawking proposes a third, tantalizingly simple, option: Quantum mechanics and general relativity remain intact. But black holes simply do not have an event horizon to catch fire. The key to his claim is that quantum effects around the black hole cause spacetime to fluctuate too wildly for a sharp boundary surface to exist.

As Hawking notes, a real solution to this problem would require laws of physics that somehow reconcile quantum mechanics with relativity, but since that still seems a distant dream, we can probably expect a lot more work along these lines, using ordinary logic to try to resolve the incompatible mathematics of situations like the black hole boundary.
Posted by John at 8:13 AM