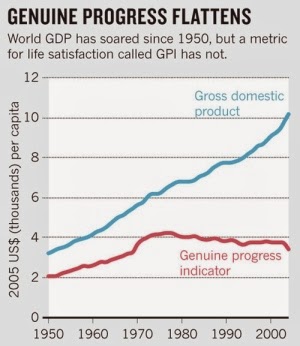 Liberals hate using Gross Domestic Product (GDP) as a measure of national well-being, and have hated it for a long time; Bobby Kennedy remarked that it measures "everything except that which makes life worthwhile." To take just one example, a rise in crime often generates an increase in GDP. More crime leads to more spending on security guards, police, prisons, and so on, plus criminals spend every penny they get right away, thereby converting capital locked away in old jewelry into new purchases. Whatever sense this makes from a purely economic perspective it is nonsense as a guide to government policy. Conservatives tend to defend GDP, not so much because they love it as because they hate the notion of governments creating National Happiness Indicators and basing policy on the latest version of polling about who is happy and why. (One measurement defended by some activists is called the Happy Planet Index.) At least economic production is something we more or less understand.

Economists, sociologists, and others have tried many different formulas for a quantifiable, defensible number that could replace GDP as our bottom line measure of national well-being. Right now the most widely used is the Genuine Progress Indicator or GPI. This has a good deal of support in the community of people who care about this sort of thing; two states, Maryland and Vermont, now use GPI to measure the economic impact of state programs. GPI has been studied enough to show that it correlates better with polls measuring life satisfaction than GDP per person does. Consider the graph above; if GDP per person were really a measure of how good life is, Americans ought to be happier than we were in 1970, whereas in fact we are not. I would say that the GPI line above correlates better with my sense of how Americans feel than the soaring GDP line does.

Reading about this, I got curious about what really goes into the GPI number. One thing it does is give greater weight to income gains among the poor than among the rich. This makes sense; after all, a thousand dollars in additional income makes a much bigger difference to a poor person than it does to a billionaire. Economist John Kenneth Galbraith once said,


To furnish a barren room is one thing. To continue to crowd in furniture until the foundation buckles is quite another.

I like that feature. Another interesting feature is that it gives weight to time off from work; if all Americans got an extra week of vacation our GDP would fall, but we would probably be happier. GPI also includes a measure for leisure time lost to things like commuting and filling out tax forms.

So there things about GPI that I like. There are also things I find dubious, and which I think will keep it from ever becoming a standard economic measurement in its current form. This is wikipedia's list of the factors that go into GPI measurements:

You can see that at least in terms of the number of items, environmental matters get a lot of attention. On the other hand some non-economic items dear to conservatives do not, such as church attendance (which correlates positively with happiness), membership in civic organizations, and strength of communities. Health is weirdly missing; isn't life expectancy an important measure of well being? What about infant mortality or days lost to illness?

What is the economic cost of noise pollution, or ozone depletion? What is the value of higher education?

The impulse behind the drive to replace GDP seems to be a belief that just citing that number all the time leads us to care too much about economic growth. I am not sure that we really do care so much. Which number have you seen more over the past few years, the GDP number or the unemployment rate? The notion that our policies are built around GDP makes it hard to explain why we have in fact passed numerous environmental laws. So while I am intrigued by these alternative measures of national well being, I am not convinced that we gain that much by switching to GPI, and I am not sure that it matters very much.

Maryland's video introducing its GPI scheme is here.
Posted by John at 10:20 AM