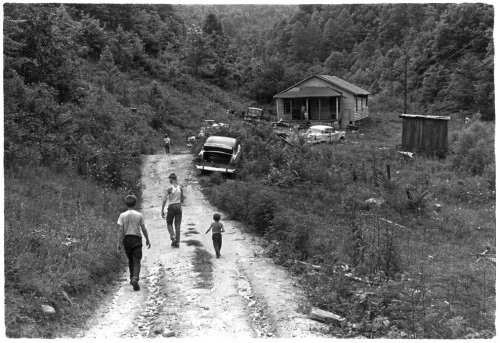 
There are lots of diversions in the Big White Ghetto, the vast moribund matrix of Wonder Bread–hued Appalachian towns and villages stretching from northern Mississippi to southern New York, a slowly dissipating nebula of poverty and misery with its heart in eastern Kentucky, the last redoubt of the Scots-Irish working class that picked up where African slave labor left off, mining and cropping and sawing the raw materials for a modern American economy that would soon run out of profitable uses for the class of people who 500 years ago would have been known, without any derogation, as peasants. Thinking about the future here and its bleak prospects is not much fun at all, so instead of too much black-minded introspection you have the pills and the dope, the morning beers, the endless scratch-off lotto cards, healing meetings up on the hill, the federally funded ritual of trading cases of food-stamp Pepsi for packs of Kentucky’s Best cigarettes and good old hard currency, tall piles of gas-station nachos, the occasional blast of meth, Narcotics Anonymous meetings, petty crime, the draw, the recreational making and surgical unmaking of teenaged mothers, and death: Life expectancies are short — the typical man here dies well over a decade earlier than does a man in Fairfax County, Va. — and they are getting shorter, women’s life expectancy having declined by nearly 1.1 percent from 1987 to 2007.

Williamson notes that Appalachia presents problems for both liberal and conservative theorists, for liberals in that government handouts seem to be part of the problem, for conservatives in that these areas are more religious than most of America and have higher rates of marriage and lower rates of abortion. In the inner city, married people do better than singles and their children much better, but these things are not nearly so true in Appalachia, where there just aren't any jobs even for many of the stable and healthy.
Posted by John at 7:55 AM