The best archaeological museum website in the world belongs to the Danish National Museum. They have hundreds of wonderful images of their artifacts and displays, many of them rotatable and zoomable. This is the grave of the "Woman from Himlingøje," an Iron Age noble woman buried around 200 CE. 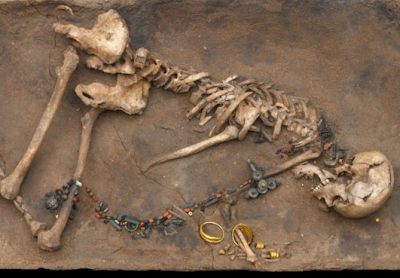 The grave is part of a cemetery of noble or princely graves on the Stevns peninsula, most likely a local dynasty. The Woman was 40 to 50 years old when she died. She was buried with a remarkable assortment of grave goods, some of them locally made but many of them imports from Rome. 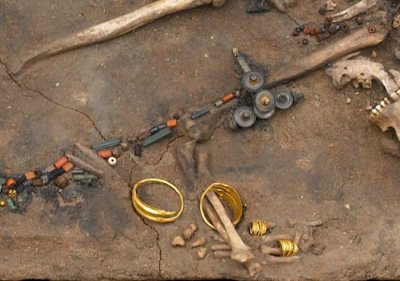 Here you can see some of her jewelry: gold bracelets and finger rings, and a long belt or girdle made mainly of glass beads. 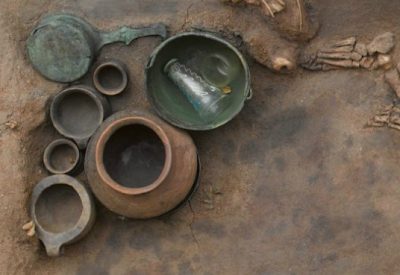 At her feet was a set of Roman bronze serving dishes and a large locally made earthen pot. 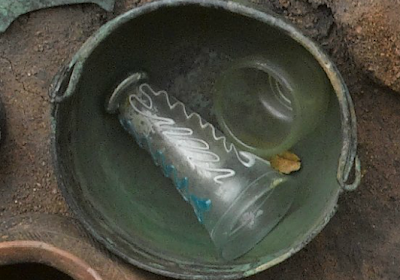 In one of the bronze pots were two Roman glass beakers. 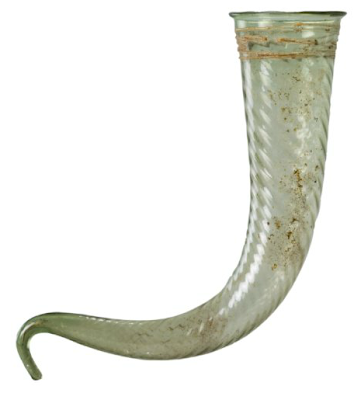 This glass drinking horn was found in another of the graves at Himlingøje; presumably this was made by craftsmen in Roman Gaul for the barbarian market. Roman luxuries were much sought after by the Germanic elite, and the princes of Stevns had good access to these items. Some may have come through trade -- the major German exports in the period included amber, furs, silver, slaves, and live animals such as bears and hawks. Other objects may have been diplomatic presents; the Romans like to neutralize dangerous barbarians right on their frontiers by reaching past them and making friends with other barbarians farther away, which might have included Denmark. There is some evidence that men from this region also served in the Roman army, so perhaps one or more chieftains of this dynasty commanded auxiliary troops and brought back their accumulated pay in the form of glass and bronze. But one thing you don't see much of in Scandinavia is Roman weapons; there are a few, but by and large the Germans preferred their own weapons, which were presumably better suited to their style of warfare.
Posted by John at 7:09 AM